Every church tells a story. (Even those with brutalist architecture.) 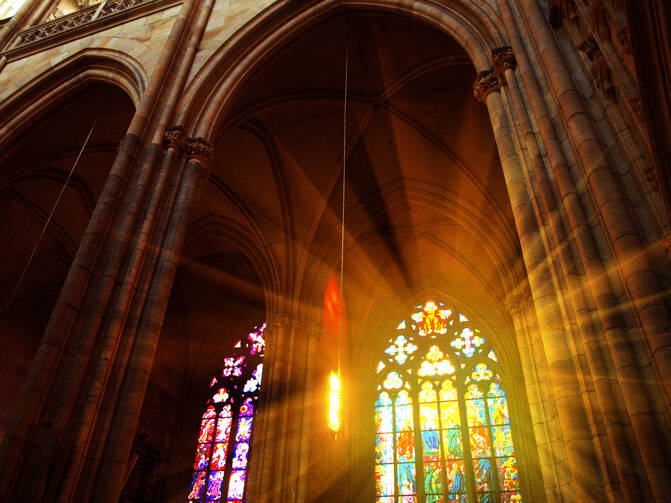 Not far from where Wilshire Boulevard cuts northwest along its journey from downtown Los Angeles to the Pacific Ocean, and just across the street from the oldest Jewish congregation in the city, stands the statue of a cloaked woman. Her eyes look toward the heavens, her hands extended skyward in a moment that captures either ecstatic praise or heartfelt petition. The marker at the statue’s base reads: “Our Lady of the Angels.”

Behind Our Lady of the Angels sits a unique piece of Catholic architecture in California: St. Basil Roman Catholic Church. Designed in the late 1960s by Albert C. Martin Jr., an architect who has designed much of the downtown skyline, St. Basil is a massive concrete structure consisting of 12 towers, each over 80 feet high, connected by window shafts filled with multicolored, shattered-like fragments of stained glass. The church spire soars even higher, 160 feet, with a cross on the top.

Mr. Martin’s idea for the structure was to marry the fortress-like feeling of an ancient monastery with then-contemporary architectural trends toward exposed, unadorned concrete at enormous scale. It was in many ways a strange choice for a post-Vatican II church; the self-proclaimed Brutalist style he drew from informed the massive housing projects and blighted government buildings of the time. Brutalist architecture—a name first used to suggest the raw, undisguised material (think concrete) often used in construction rather than the design’s overall effect—was eventually associated with a kind of severity and inhumanity.

As Prince Charles of England said of Brutalism: “You have to give this much to the Luftwaffe: When it knocked down our buildings, it didn’t replace them with anything more offensive than rubble.”

Yet Mr. Martin saw within the style a way of recalling “the time when the church often served as a place of refuge.” And to the architect’s credit, St. Basil has none of the coldness of other Brutalist work. The long, smooth walls of concrete, bright against the blue skies and set at slight angles to one another, catch the eye and implore a closer look.

And there is much within to commend investigation. The brilliant shards of stained glass shine out like an orchestra of light. Above the altar, a 14th-century crucifix hangs upon a gorgeous modern setting of winding, teak-covered tubes. The design has the feel of a wind drawing Jesus and the weight of his suffering up from the earth.

What is most striking about the interior of St. Basil, though, is the sense of presence that fills it. Even after seeing from the outside how high the church’s castle-like ramparts rise, how far its walls extend, upon entering one feels as though one has stepped into another world entirely, a vast and empty expanse.

But no, not empty; something abides in that space, a presence that is huge and silent and completely still. Images of divinity that are often shied away from in contemporary life here are palpable—the God who is eternal, the God who is power and might, the God who sees and judges all our actions.

And yet even as that presence humbles those who come here, it also draws them into his silent witness. From the back of the church the altar is distant; the action of the liturgy appears small, much as the activity of the world might appear to God.

Every church tells a story. Not just in its statuary and artwork but in the pour of its walls and pillars, the shape of its bones, every church offers an image of God, a vision for us. Often today that story has something of the character of a children’s Christmas pageant—up close, nonthreatening and personal.

We’re right there in the manger with Mary, Joseph and their baby; we’re sitting in the fields with the shepherds when the angels announce good news of great joy for all people; we walk with the three kings under the stars to find a child of light and life.

But there are other stories of God and other visions. To sit with the God of St. Basil’s Church, the God who is mystery, who will not be tamed or fooled, who exists in eternity, is to see one’s own fears and concerns grow smaller, less compelling. And yet, like a child looking up to discover the endless night sky, that awareness brings not outrage but contemplation and wonder.

We become aware there is a much bigger story at work.