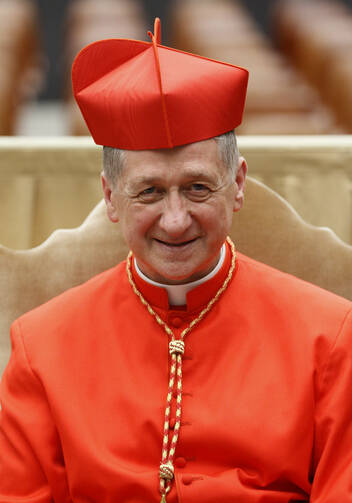 “The problem that we have today, not only in society but also in the church, is that we’ve become too polarized,” Cardinal Kevin Farrell, an Irish-born prelate who was bishop of Dallas before taking over a Vatican department on family life earlier this year, told America. “We’ve believed that we’ve become gods on both sides, on the left and on the right, and neither one of them are correct.”

The days-long celebration in Rome was centered on a solemn ceremony inside St. Peter’s Basilica on Saturday morning, Nov. 19, during which Pope Francis elevated 17 men to the rank of cardinal. They will advise the pope, and 13 of them are eligible to vote for his successor.

The service, called a consistory, was bookended by numerous celebrations and prayer services. In the days leading up to the event, four cardinals, including Cardinal Raymond Burke, of the United States, made their disagreements with the pope public—and even threatened a public rebuke if he ignored their questions.

At issue, they said, are ambiguities in one of the pope’s pastoral letters, “Amoris Laetitia.” The letter is the pope’s summary of a two-year discussion of family issues held by bishops from around the world, including hot-button topics like divorce, homosexuality and a breakdown in societal support for families.

Some bishops have said the document’s emphasis on conscience, reconciliation and discernment opens the door to Communion for divorced and remarried Catholics, a view the pope himself seemed to endorse. The four cardinals opposed to such an interpretation sent a letter to the Vatican in September asking for yes or no answers to five questions they had about the document. The pope chose not to respond, leading to threats of a public rebuke from Cardinal Burke.

Cardinal Blase Cupich, the archbishop of Chicago who was among those made cardinals at the Nov. 19 consistory, dismissed such concerns and said that those raising them may have to look inward for clarity. He pointed to an interview with Pope Francis published on Nov. 18 by the Italian Catholic newspaper Avvenire, in which the pope spoke about individuals who want the world to be “black and white.”

“But life is full of ambiguity,” Cardinal Cupich said at a press briefing at the Pontifical North American College following the consistory. Cardinal Cupich, who was handpicked by Pope Francis to lead the church in Chicago, also downplayed the notion that there exists widespread opposition to the pope or that Francis should be forced to defend his teaching.

“I think there are enough voices out there in which the Holy Father doesn’t have to in any way defend a teaching document of the church,” he continued. “It’s up to those who have doubts or questions to have conversions in their lives.”

In an interview with America, Cardinal Joseph Tobin agreed, pointing to people like Cardinal Christoph Schönborn of Vienna, who have said the pope’s teaching is magisterial. Cardinal Tobin said that some cardinals not on board with the pope are taking advantage of Francis when he encourages free and open dialogue. “I think it’s arguable that in previous pontificates there wouldn’t have been the freedom to express this sort of stuff,” said Cardinal Tobin, who will leave his post in Indianapolis in January to lead the Archdiocese of Newark. “The pope teaches,” he said. “How it’s interpreted is done by somebody else.”

He also said that those opposed to the pope’s reforms are sometimes guided by a strong sense of legalism. “I think some people get it and understand that what he’s talking about is not just a sort of catechism of questions and answers but rather a recognition of the sanctity of conscience, as well as the obligation to form it, in the Catholic population.”