Why saints are never sure of their salvation 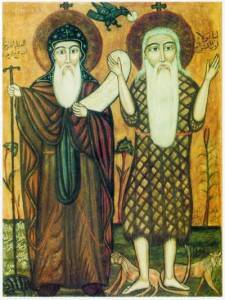 We call them the Desert Fathers, though, certainly, there were women, Desert Mothers, among them. Beginning in the third century, these men and women retreated into the Egyptian desert. They were hermits, who sought to give themselves to Christ through asceticism. Each lived alone in a cave, gathering only occasionally with others for Eucharist and prayers. Their witness remains in the church, in both its Eastern and Western branches, in the monastic life. They’ve also left us a collection of spiritual gems in their sayings and stories. Here is one. See what you make of it.

At the moment that a holy elder was in the throes of death, the devil appeared before him and shouted at him, “You destroyed me, you wretch.”
“I am still not sure of that,” the Saint replied, and reposed.

There’s the story. What’s one to make of it? Why does the dying saint doubt his salvation, which even the devil laments as something already accomplished? Why does he say, “I am still not sure of that” and only then does he die? Is he not a saint?

We should take the story at face value. This is truly the death of God’s holy one. So why does the saint doubt his salvation? Does he think that, in the last, fleeting moments of his life, he might yet sin, might still separate himself from God?

Yes. He does. The saint realizes that even at the last moment, when his body is incapable of sinful rebellion, his soul might yet rejoice in what it considers its triumph, attributing salvation to its own asceticism, its own zeal, rather than to the grace of God.

That would be the sin of pride, which may well be the first deadly sin to arrive and the last to leave. Pride tiptoed into your life while you were still a toddler, and it can remain, ruling your life, even after you’ve been hooked to a respirator. Am I surrendering to God, or closing in upon myself? That’s the disciple’s question, from first step to last breath. That’s why we pray that we ourselves might make a good death, and why we plead so fervently for those who are dying.

God loves all men and women. In his goodness, God comes to all. Yet as long as pride remains a part of us, we cannot fully receive God, cannot really comprehend God. St. Maximus the Confessor taught that “to a foolish intellect its own thoughts appear the most intelligent of all, though they may be utterly degraded.”

The skeptic insolently says, “If only God would show himself to me.” The saint respectfully replies, “But that would make the Almighty God something that you master, someone who surrenders to you. No, you must surrender to God! Let go of your pride. Then you will see. Then you will live. Remain in your pride, and you will die blind and alone.”

St. James teaches: “God resists the proud, but gives grace to the humble” (4: 6). The skeptic says that, when he can see God, he will pray to God. He will humble himself before God. The saint responds that unless he humbles himself and turns to prayer, he will never see God.

The prayer of the lowly pierces the clouds;
it does not rest till it reaches its goal (Sir 35: 21).

Humility alone grants access to God, which is why the Desert Father Abba Or teaches that to be the Lord’s disciple is ever to struggle against pride.

Whenever you want to subdue your high and proud thoughts, examine your conscience carefully: Have you kept all the commandments? Have you loved your enemies and been kind to them in their misfortunes? Have you counted yourself to be an unprofitable servant and the worst of all sinners? If you find you have done all this, do not therefore think well of yourself as if you had done everything well but realize that even the thought of such things is totally destructive.

One can make great progress in all the virtues, yet God comes not to the proud. Indeed, as the Desert Fathers point out, Lucifer, the bearer of light, possessed every virtue, making him a spiritual creature of unsurpassed beauty, yet still he fell through pride.

The Pharisee who prays in the temple is a virtuous man. That’s the point of the parable. We should be as virtuous. The problem is that he comes before God, relying upon his goodness rather than God’s mercy. We cannot be filled with God, we cannot become something hallowed, without hollowing out ourselves.

That’s why the saint tells the devil that he is still not sure that he has defeated the diabolical, and, only then, does he die. He takes seriously this injunction of St. Nilus, “Rejoice when you perform the virtues, but do not become exalted, lest, arriving at the pier, you suffer a shipwreck.”

We moderns are so different from that dying father of the desert! He dies unsure of his salvation, not because he doesn’t trust God or the Gospel, but because he remains convinced of his sins, of the possibility of pride, even at the end. We moderns doubt the existence of God; we do not recognize our own sins, especially the sin of pride; yet we entertain no uncertainty about our salvation. We ask: who would worship a God, angry enough to send a soul, such as I am, to hell?

God’s anger doesn’t damn souls. In their pride, they plunge deeply into themselves and discover…absolutely nothing other than themselves. That is the meaning of hell: to be enclosed in the self, to be sealed away from God. Because we cannot hollow out ourselves, we cannot receive that which is truly hallow. We cannot receive God, by whom, and for whom, we were created.

Terrance Klein
Show Comments (
5
)
Comments are automatically closed two weeks after an article's initial publication. See our comments policy for more.
William Rydberg
6 years 3 months ago
The little story is not about pride at all... It's a caution against dialog with the devil. A warning get against constant internal comparisons. The Catechism of the Catholic Church is highly recommended resource. It's actually a story telling us about the importance of attending to the external data of Revelation which is inspired by God. That relying on being an "active contemplative" is a spiritually bad place to be should one cut loose from the data of Revelation. Which is why the combination of Magisterium, Scripture and Tradition embodied in the Church is our truest "North". Don't be so inward focussed, measuring your levels of "pride" but rather be focussed on the other. For the Gospel says that the person that loses their own life for my sake (Jesus-God come in the flesh) will save it...Matt 16:25 For the Glory of God is man fully alive! in Christ, Blessed be the Holy Trinity
L J
6 years 3 months ago
Fr Klein, that was one of the most beautiful articles I have ever seen on America Magazine. Fr Sawyer we need more content like this excellent piece. Fr Klein nailed it. Thank you also for referencing the Apophthegmata Patrum! Excellent! https://www.amazon.com/Sayings-Desert-Fathers-Alphabetical-Collection/dp/0879079592
Bruce Snowden
6 years 3 months ago
Just read this stirring teaching and I am totally impressed. "Do this and your shall live." Do what? Make tangible in my life the words of Jesus, Desert Fathers and Mothers! I believe doing so will keep me in the State of Sanctifying Grace and since no one can say with absolute certitude that they are in Sanctifying Grace, the words of St. Joan of Arc come to mind. Being prodded to commit heresy by the Prosecutor, justifying her execution, she was asked the question, "Are you in the State of Grace?" She responded, "If I am not may God put me there and if I am may He keep me there! The perfect answer!. That's where I place my hope for eternal life. Another saint once said demonstrating his total love for God that, even if God would put him in Hell, he would still trust Him!" I find myself thinking the same way and can only hope that the insidious sin of Pride is not deceiving me! The words of Jesus to St. Faustina Kowlska encourages me, "Tell aching humanity to snuggle close to My Merciful Heart," May the Desert Fathers and Mothers look after me - everyone. I do take all of this seriously and because I expect a good result, joy the fruit of trust, is not absent.
William Rydberg
6 years 3 months ago
Mr Snowdon, God would not intentionally put someone in Hell for he desires that all be saved (1 Tim 2:4). Don't know which Saint whom you refer, but as a general Rule, the Church raised the category of "Doctor of the Church" category to assist the faithful. Likely because all Saints are Saints, however not all were 100 percent right. But rather good overall teaching examples to the faithful (canonization). Remember too that everyone in a state of grace is a saint of God. It's all good news my friend! in my opinion, in Christ,
Bruce Snowden
6 years 3 months ago
Good Morning Mr. Rydberg, Yes, I understand that God Wills that all be saved, and I believe it. The Saint who made the remark I mentioned was no doubt speaking hyperbolically, as the Lord Himself sometimes did, as emphasis to a point. Then too, love often leads to excessive talk attempting to show how much one loves another, so much that even if they killed you, you would still love that person! See Jesus, we killed Him, yet He still loves us unconditionally. Love is crazy good! When you're crazy in love, we speak from the heart, Saints too in relation to Jesus. At least that's how I understand it. Thanks my friend for commenting.