Waiting to hear about the new Jesuit superior general, and remembering my time as a delegate 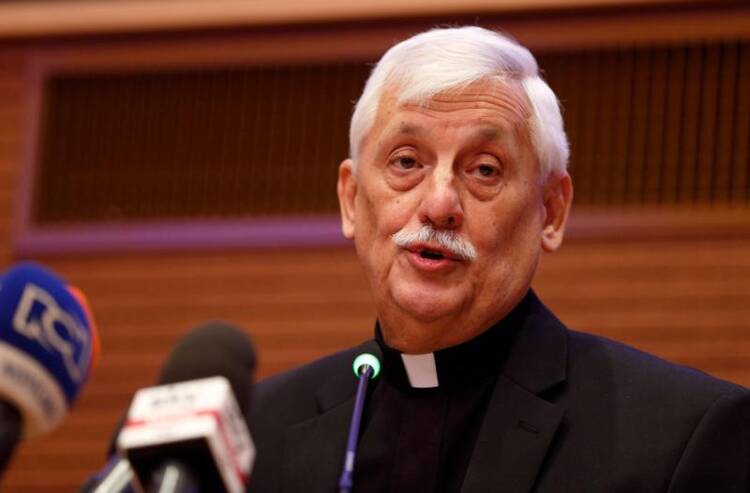 I got down to my office early last Friday, Oct. 14—really early, just a bit past 5. It wasn’t a tight deadline that brought me there. Rather, I was looking for the big news we were expecting, news from Rome where that day our Jesuit general congregation was electing a new superior general. Rome is six hours ahead of us, so the morning’s work there should be moving along. If the delegates did not reach a decision on the first ballot, there would be another, and then another until one Jesuit received the needed majority.

I recall the excitement at the previous congregation, the 35th, in January 2008, as the leaders up front in the aula, the meeting hall, opened the paper ballots and read out the names. The first round of ballotting failed to reach the required majority, but as the second round results were tallied, it became clear that Adolfo Nicolás would be chosen. We had heard his name mentioned among those who emerged as possible choices—all without politics or campaigning. We had seen him walking the halls, praying in the aula, attending Mass with the rest of us. And the numbers by his name were adding up.

I had met Father Nicolás in Tokyo in the early ’90s on the night before he was announced as the Jesuit superior of Japan. I met him again when he stayed briefly in our community in Chicago a couple of years later, and then a decade after that at a meeting in Spain. I was sure that with his talent for administration, his spirituality and commitment to mission and his ready smile he would be a great leader. But I also felt concern for him as his life was about to make a dramatic turn.

At 5:33 a.m. last Friday we had word that applause was coming from the aula. Only delegates were in the hall during the voting; curial staff and other congregation staff were waiting nearby to catch any news. The applause was the first sign that the voting might be over. Once the new general was officially chosen, I expected that Father Federico Lombardi would phone this news to Pope Francis, as he had called Pope Benedict in 2008 with the election result. As the outside world waited, the electors filed up one by one to greet their new general. The mood was very upbeat, consolation at having done an important job well.

At 6:13 a.m., we got word that General Congregation 36 had chosen Father Arturo Sosa of Venezuela as the 31st superior general of the Society of Jesus.

In the week before the election, the congregation had discussed the needs of the Society of Jesus today. No specifics of that are made public, but as we look at Jesuit ministry in various areas of the world, we know that different issues arise. In India and parts of Africa, one issue would be managing growth. In the United States, one issue would certainly be how to manage the Jesuit identity of well-established institutions with declining numbers of Jesuits.The superior general does not manage the details of these issues, but he is certainly aware of them. Part of his job is to read the many reports that come in from the provinces around the world. And he does detail work in that he appoints provincial superiors and some local superiors. And he makes major decisions with wide impact.

A great part of his mission is to lead us all, to inspire us in our specific ministries. We hear that we are called to be at the margins, to go to the frontiers, to get in the mix with the issues that affect people today. We need to aid the contact between the church and contemporary culture: How to we preach Jesus and his Gospel today?

The congregation has spoken, and we are happy with their choice of Father Arturo Sosa as our new superior general. We have every confidence in him and thank him for taking on his new mission.

Edward W. Schmidt, S.J., is the senior editor of America.

Show Comments (
1
)
Comments are automatically closed two weeks after an article's initial publication. See our comments policy for more.
Henry George
5 years 8 months ago
I made a comment, but perhaps it was lost in cyber space. Fr. Sosa S.J., may turn out to be a Saint. But when you say: "We are happy with their choice" - of whom are you speaking Fr. Schmidt ? All Jesuits, the Jesuits in your community ? I will pray that Fr. Sosa makes sure that the Society of Jesus is run by the best possible Provincials and not Provincials who happen to be good friends with the previous Provincials who happened to be close friends of previous Provincials. I will also pray that the Society learn, as a whole, to live a far more simpler life of true devotion to the Church even if that means turning away from the latest social trends and ideas.