How can the church serve the Hispanic community at a time of rapid change? 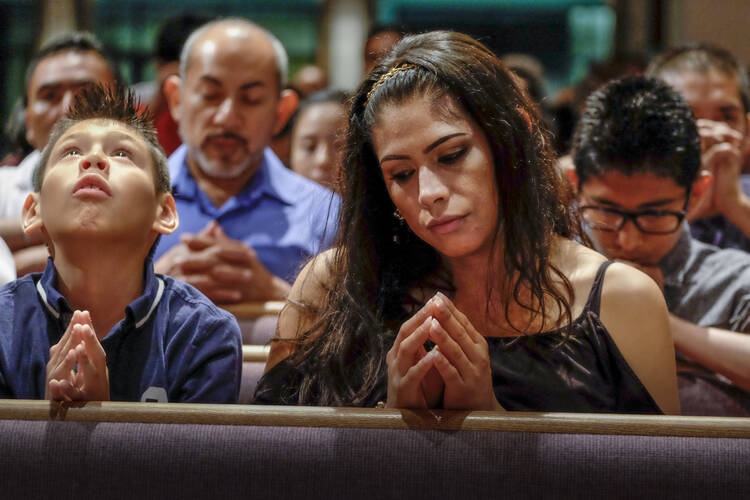 During his visit to the United States last year, Pope Francis reminded Americans that it is a Christian duty to welcome immigrants and “offer them the warmth of the love of Christ.” Over a year later, many Catholics, like Archbishop José Gómez of Los Angeles, have taken the pope’s call to heart. According to Archbishop Gómez, there is a “Latino moment” underway in the United States. “I think it’s even more clear to me, with the election, how important it is to help...the Latino culture to make a presence and influence in the United States,” the archbishop says.

The Hispanic population in the United States has long been characterized by rapid growth. According to the Pew Hispanic Center, in 1980 Hispanics made up less than 7 percent of the total U.S. population. By 2014 this population more than tripled to 55.3 million, or 17 percent of the total population. According to new data from the Pew Research Center, however, the growth and dispersion of this population has slowed. While immigration was the principal driver behind its growth during the 1980s through 1990s, the flow began to decrease in the mid-2000s. Between 2000 and 2014, over one million Mexicans and their families left the United States to return to their native country, citing reasons like a weakened U.S. economy. Throughout this same time period, birth rates among Hispanic women ages 15 through 44 also dropped, from about 95 births annually per 1,000 women to 72.1.

Despite this statistical downturn, the Hispanic community occupies a vital place in the U.S. Catholic Church. According to the U.S. Conference of Catholic Bishops, Hispanics made up 70 percent of the church’s growth in the last 50 years. Recent studies show that over 65 percent of Hispanics in the United States identify as Catholic. The Center for Applied Research in the Apostolate reports that the retention rate for Hispanic youth is 71 percent, 10 points higher than for non-Hispanics. But while Hispanics constitute about 40 percent of the approximately 78 million Catholics in the United States, only 25 percent of Catholic parishes offer services specifically for them. Hispanics will continue to be a significant community for the church in the United States for years to come. What can the church do to serve these groups better?

One recommendation is to provide more financial resources to parishes that serve Hispanic communities. Pastoral leaders in these settings often have little money. A 2014 report produced by Hosffman Ospino of Boston College studied Hispanic ministry in Catholic parishes across the United States. Eighty-seven percent of respondents had “an annual budget to work directly on projects for Spanish speaking Catholics,” Dr. Ospino reports. Yet only 11 percent of the parishes studied had an annual budget over $200,000 for each project; 16 percent had less than $10,000.

Second, the church can encourage the inclusion of Hispanics in pastoral leadership. Only 10 percent of the pastors serving these communities identify as Hispanic, and just 4 percent list Spanish as a first language. Hispanic pastoral leaders should ideally possess linguistic skills and a cultural understanding of the people they are serving in the pews. Third, the church can work to increase pastoral outreach to Hispanic youth. According to the National Gang Center, 46.2 percent of U.S. gang members in large cities as of 2011 were Hispanics, many under the age of 18. Yet only 4 percent of the parishes serving Hispanic communities have developed outreach programs to help youth involved in gangs. Meanwhile, fewer than 3 percent of Hispanic school-age children go to Catholic schools. This number could be increased with targeted recruitment and a greater effort to hire Hispanic teachers.

Finally, the Catholic Church can help these communities become integrated without losing their sense of cultural identity. For many Hispanics, assimilation often leads to a loss of their heritage and faith. Archbishop Gómez describes this as a major challenge for the church “because the traditional U.S. culture makes it sometimes hard not to forget where you’re coming from: It assimilates people instead of integrating them.” The church can provide a way for these communities to retain their identity and culture in a foreign land. Following the lead of Archbishop Gómez, Catholic leaders can help the larger U.S. community better understand its deep roots in Latino culture, which date back centuries.

During his papal visit, the pope urged the church not to forget the pilgrims in search of a better life in the United States, many of whom possess an immense sense of faith, community and family that enriches our nation. As Christians, we must “not be afraid to welcome them”—and sustain them in a new land.

This editorial is also available in Spanish.

To all commenters: we're making an effort to call people's attention to our comments policy, and specifically to the condition that comments be brief (no longer than 300 words). In the future, we'll be moderating to remove comments that are overly long.

Richard Miller
5 years 8 months ago
Firstly, it is important to make a mindful selection of language when conveying concepts, especially when dealing with an issue such as race, culture, ethnicity, etc. This leads me to my second point: assimilation, as I understand it, is a loss of cultural/ethnic identity predicated by the ideas of cultural imperialism. Acculturation, on the other hand is a concept that is based on respect for the culture of a person who may be experiencing such. With acculturation, an immigrant or refugee learns to function as a responsible citizen of the United States, but this in no way requires a loss of cultural or self-identified ethnicities. Engaging diversity and social justice in our society is a moral and ethical obligation, especially if one aligns oneself with Christ's teachings. "Othering" people is a basic tenet of racism and xenophobia. If we are devaluing another's life experience or cultural heritage we are culpable of such. The Church is a system of major support for many ethnically diverse persons whether citizen, immigrant, refugee, or asylum seeker. It is a place to belong and not feel othered. What can we do to elevate the respect for our brothers and sisters whom even our Lord stretched himself in the gospels to embrace. I am reminded that the woman who sought Christ, but that was not an Israelite, was told that it wasn't right to give the children's food to dogs. She retorted and wowed our Lord who said, yes, but even the dogs eat the crumbs that fall from the master's table. Who are we treating like dogs today? Will we look with the eyes of Christ and see that all are human, all are worthy of love?
Chuck Kotlarz
5 years 8 months ago
A non-Hispanic person can go to the shopping mall in McAllen, Texas during the summer and perhaps be the only non-Hispanic there. In the winter months, the mall is full of northerners escaping snow and bitter cold. One non-Hispanic northerner I knew from high school moved to McAllen and all but one of nine siblings soon followed. Even his folks moved. Further west, Fr. Carlos Pinto, known as the Apostle of El Paso, was the most prominent of a group of Jesuits from the Naples Province of Italy. Under his leadership, the Jesuits built 14 churches and seven schools between 1892 and 1917. Spanish has been an integral part of many US cities along the Mexican border for over 300 years. Shoppers and those visiting family back up border crossings for hours on weekends and holidays.
Joseph Guiltinan
5 years 8 months ago
One poster notes that few Hispanic children attend Catholic schools. In my parish, at least, it is a cost issue. Few have the resources to pay tuition, and the Diocese does not have the funds to provide scholarships. What does this augur for the future of Catholic grade schools? What are the real issues about enrollment in Catholic grade schools? Are they just demographic issues?