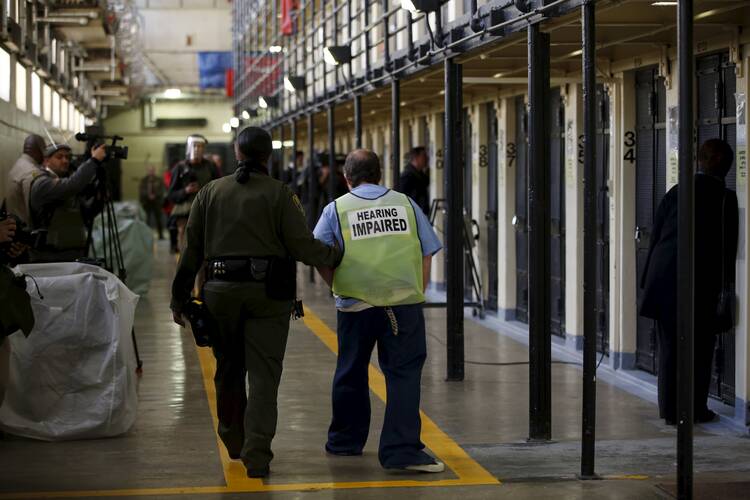 Pope Francis’ position on the death penalty is abolitionist. He believes there is no moral ground in Catholic teaching that would justify any state using capital punishment today, and he has set up a commission to review the question and the relevant section of the Catechism of the Catholic Church to amend this.

Right now the catechism does not exclude the use of the death penalty in extreme situations. It says in No. 2267:

Assuming that the guilty party’s identity and responsibility have been fully determined, the traditional teaching of the Church does not exclude recourse to the death penalty, if this is the only possible way of effectively defending human lives against the unjust aggressor.

If, however, non-lethal means are sufficient to defend and protect people’s safety from the aggressor, authority will limit itself to such means, as these are more in keeping with the concrete conditions of the common good and more in conformity to the dignity of the human person.

Today, in fact, as a consequence of the possibilities which the state has for effectively preventing crime, by rendering one who has committed an offense incapable of doing harm—without definitely taking away from him the possibility of redeeming himself—the cases in which the execution of the offender is an absolute necessity “are very rare, if not practically nonexistent.”

Over the past half century, a development has taken place in the church’s position regarding capital punishment. Some consider it a development in church teaching. This has come about in parallel to growing opposition to it in civil society, particularly in Europe, but also in the United States and elsewhere.

Ever since John XXIII, popes, whenever requested, have appealed to state authorities on behalf of individuals about to be executed. It became common practice for the Holy See to do so under St. John Paul II. Bishops’ conferences in many lands, including the United States, have done likewise and pushed for abolition.

As for church teaching, the historical record shows there was considerable discussion around this issue during the drafting of the new catechism. Some wanted the abolitionist stance recognized, but that did not happen. Many were unhappy with the first published text (1992), but this was amended following St. John Paul II’s encyclical “The Gospel of Life” in 1995.

As a growing movement in the Catholic world continued to push the church to take an abolitionist stance, St. John Paul II took another step in January 1999 without changing Catholic teaching. He appealed for a global consensus to end the death penalty because it is “both cruel and unnecessary.” Benedict XVI made a similar appeal in  November 2011.

Francis, however, has moved beyond his predecessors’ positions and advocates abolition from convictions of faith. He stated this clearly on Sept. 24, 2015, when, addressing a joint session of the U.S. Congress, he cited the Golden Rule: “Do unto others as you would have them do unto you” (Mt 7:12). He told Congress, “this rule points us in a clear direction” and “reminds us of our responsibility to protect and defend human life at every stage of its development.”

He confided that “this conviction has led me, from the beginning of my ministry, to advocate at different levels for the global abolition of the death penalty. I am convinced that this way is the best, since every life is sacred, every human person is endowed with an inalienable dignity, and society can only benefit from the rehabilitation of those convicted of crimes.”

The pope recalled that his brother bishops in the United States had “renewed their call for the abolition of the death penalty,” and stated, “Not only do I support them, but I also offer encouragement to all those who are convinced that a just and necessary punishment must never exclude the dimension of hope and the goal of rehabilitation.”

He sent the same message to the United Nations and reiterated it several times this year. On Feb. 21, 2016, for example, he not only followed his predecessors by appealing “to the consciences of those who govern to reach an international consensus to abolish the death penalty”; he went further by stating clearly that “the commandment ‘You shall not kill’ has absolute value and applies to both the innocent and the guilty.”

@gerryorome
Show Comments (
2
)
Comments are automatically closed two weeks after an article's initial publication. See our comments policy for more.
Carlos Ramos-Mattei
6 years 7 months ago
Cardinal Bernardin pointed out the "seamless garment" analogy. Abortion is part of the culture of death; so is the death penalty. I myself favor the opposite: the Catechism provides exceptions for the death penalty; in the same way there should be exceptions to abortion.
Henry George
6 years 5 months ago
Is it clear that someone who is a repeat murderer can be isolated in such a way - a way that respects human dignity - that they can absolutely be prevented from killing again ?