A Theology of Taylor Swift 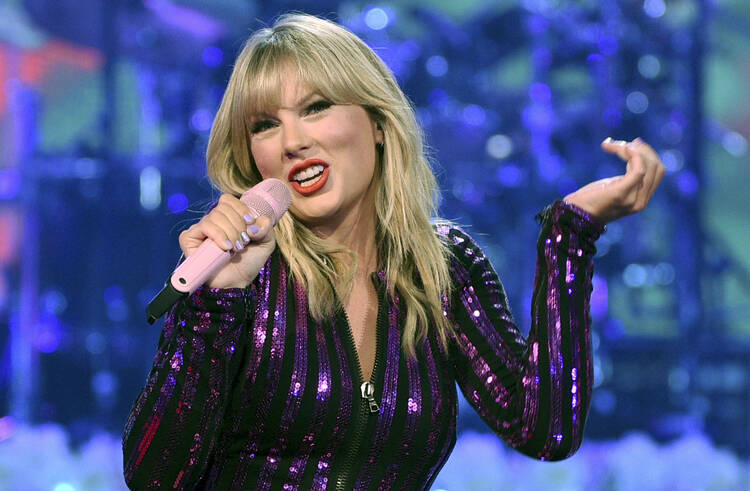 No topic, according to St. Thomas Aquinas, is out of bounds for the theologian. This is because theology’s true subject matter is God, and “all things,” Aquinas sagely points out, either “are God Himself or...refer to God as their beginning and end” (Summa Theologiae, q. 1 a. 7).

With the mandate of the Angelic Doctor, then, what might be said—theologically—about Taylor Swift, the 26-year-old musical megastar, who released her debut single, “Tim McGraw,” 10 years ago this June?

On the face of it, not very much. Religion is one area of Swift’s private life that she tends not to be so open about (though rumors persist that she is at least a cradle Catholic). True, the protagonists of “Our Song” from 2006 raise the philosophically intriguing possibility that God is able to replay the immediate past: “And when I got home, ‘fore I said, ‘Amen.’/ Asking God if he could play it again.” But even in her early, countrified period, overtly Christian lyrics are otherwise few and far between.

No topic, according to St. Thomas Aquinas, is out of bounds for the theologian.

Gospel-era Bob Dylan—an obvious and well-trodden hunting ground for theology in popular music—Taylor Swift is not.

In other ways, though, comparisons with Dylan are not so wide of the mark. Both are singers, multi-instrumentalists and, taking a protean approach to genre boundaries, songwriters of genuine genius. (If you don’t believe me, go listen—really, actually, properly listen—to any of her five albums. All, down to the very last track, were written or co-written by Swift. And there is scarcely a weak song on any of them.) And if Dylan was the voice of, and soundtrack to, the youth of 50 years ago, Swift—with album sales of 40 million worldwide—is all that and more for today’s young people.

In fact, that is likely the best starting point for a kind of pastoral-theological approach to Taylor Swift. She has evidently touched a huge cultural nerve at the beginning of the 21st century. For those searching for “the signs of the times,” the “T-Swizzle” phenomenon is undoubtedly one. Note, too, that it is among young adults that Swift is most popular—and that the Catholic Church (or any church, for that matter) is increasingly not.

Note that it is among young adults that Swift is most popular—and that the Catholic Church (or any church, for that matter) is increasingly not.

That said, my own Swiftian appreciation comes directly from the committed Catholic students I teach—especially a group of bright, 20-something women. I asked one of them just what it is about Swift that she finds so compelling. Alice Costar, now a razor-sharp theology postgraduate at the University of Bonn, commented on how, being similar ages...

things Taylor sang about were happening in my own life at that time. Just as I was beginning to think that adulthood wasn’t all it was cracked up to be, she released “Never Grow Up,” a song about wishing a child could be protected from the inevitable hurts in life. The song “22” was released the year I turned 22 and conjures up memories of easily the best year of my life.

If you spend any amount of time following Swift fandom online—as “research” for a commission from America, let’s say—relatable is a term you will meet often. It is not surprising. Her eponymous album, “Taylor Swift,” was released when she was just 16. Writing and singing about what she knows, Swift is essentially an ethnographer—a participant-observer par excellence—of young adulthood’s everyday “joys and hopes, fears and anxieties” (“Gaudium et Spes,” No. 1). The song “Fifteen,” 2008’s morality tale about navigating “life before you know who you’re gonna be,” is maybe the clearest example. But really, the same applies to her oeuvre as a whole. Would-be youth ministers, take note.

The theology of Taylor Swift can, in fact, go deeper still. While I previously noted the general lack of direct religious content in the Swift canon, there are two glaring exceptions to that rule—which are all the more remarkable for their rarity.

Finding my faith in Tupperware and Taylor Swift
Zoe Silsby

Bob Dylan in the key of Catholic
James T. Keane

Buried on her 2007 Christmas album, the song “Christmas Must Be Something More,” which Swift wrote alone, does not pull its punches: “So here’s to Jesus Christ who saved our lives.” I have heard Easter morning homilies less avowedly kerygmatic than that.

Subtler, and more powerful still, is “Innocent” from 2010. Received wisdom is that the song is directed to the hip-hop artist Kanye West, an extension of forgiveness for a public slight at the Grammys in 2009. Understood in that light, the song is ludicrously overblown. But as a meditation on Christian forgiveness and the chance to “begin again” (to steal the title from a different Swift song—probably her finest, in fact) it is magnificent. With lines like “Today is never too late to be brand new” and “Oh, who you are is not what you did/ You’re still an innocent,” it is a shame the Year of Mercy already has a theme song (for the curious, it’s “Misericordes sicut Pater”). Taylor’s song is much, much better.

“In sacred science, all things are treated of under the aspect of God: either because they are God Himself or because they refer to God as their beginning and end.” Looks like Aquinas was right after all. He usually is.

Show Comments (
2
)
Comments are automatically closed two weeks after an article's initial publication. See our comments policy for more.
Walter Ceyssens
6 years 8 months ago
What then about songs in which she uses religious imigary - Holy Ground and State of Grace (from the Red Album). Could be a meditation on the Incarnation - (God's) Love in this world, made flesh thrhough human love. Just an idea.
Andrew Jeung
6 years 8 months ago
Thank you for your article. I have been listening to Taylor Swift for some time (even though I am WAY too old to be in her primary demographic), and I am convinced that there are spiritual themes that can be gleaned from her lyrics. I was just listening to the song "Clean" from her most recent album, and in my mind, that song is a clear allegory of the process of letting God into one's life to free one from sin (whether or not Taylor Swift herself intended that theme explicity).