Bob Dylan in the key of Catholic 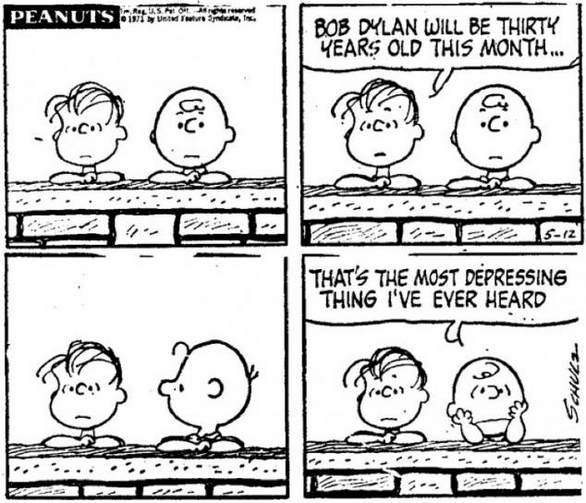 When the attached Peanuts cartoon first appeared in 1971, I was not yet born, but Bob Dylan, he of “your sons and your daughters are beyond your command,” was already aging out of the only population his generation was supposed to have any faith in. Remember "Don't trust anyone over 30"?  (Actually, Jack Weinberg, the author of that famous quote, had turned 30 a year before). I suspect Charlie Brown’s melancholy might have been far worse had he realized that Bob Dylan would outlive him by 16 years and counting. That’s right; Charlie Brown is dead, but Bob Dylan is 75 years old today.

Of course, it’s been many decades since anyone mistook Dylan as a troubadour of youth; his public persona long ago shifted from “author of ‘Forever Young’” to “dude most likely to say ‘Get Off My Lawn.’” He’s still writing music—he just released his 37th studio album last week—and his career has been so prolific that Rolling Stone can, without irony, run a feature on “100 Greatest Bob Dylan Songs." But here’s a brief list you might not have thought of: Let’s call it "Dylan In The Key of Catholic":

“Shelter From the Storm”

Most musical historians think this song is about Dylan’s ex-wife. They’re wrong. Look at the lyrics, and tell me this isn’t Jesus talking about his mother:

In a little hilltop village, they gambled for my clothes
I bargained for salvation an’ they gave me a lethal dose
I offered up my innocence and got repaid with scorn
“Come in,” she said, “I’ll give you shelter from the storm”

Suddenly I turned around and she was standin’ there
With silver bracelets on her wrists and flowers in her hair
She walked up to me so gracefully and took my crown of thorns
“Come in,” she said, “I’ll give you shelter from the storm”

On a tangentially related matter, you can watch Bill Murray sing “Shelter from the Storm” here.

Bob Dylan song that reads like the greatest satire of an academic department at a university:

That sounds like a joke because of the title, but seriously, if you’re a professor, listen to this song and tell me you don’t recognize a few of your colleagues in the lyrics. Here’s one sample:

Einstein, disguised as Robin Hood
With his memories in a trunk
Passed this way an hour ago
With his friend, a jealous monk
He looked so immaculately frightful
As he bummed a cigarette
Then he went off sniffing drainpipes
And reciting the alphabet

…or how about this scathing indictment of a theology professor?

Her profession’s her religion
Her sin is her lifelessness

…or this perfect description of a department meeting?

Praise be to Nero’s Neptune
The Titanic sails at dawn
And everybody’s shouting
“Which Side Are You On?”
And Ezra Pound and T. S. Eliot
Fighting in the captain’s tower
While calypso singers laugh at them
And fishermen hold flowers

I’m telling you, the guy is secretly an adjunct in a theology department!

Best Bob Dylan song to listen to on repeat when you’re in a rage at the Catholic Church:

Many Dylanologists would consider this song a condemnation of Madison Avenue and advertising in general, but the lyrics work just as well for the days when the church we love is very, very unlovable. Sample lyrics:

The lyrics to this final track from 2006’s "Modern Times" read like a novel by Walker Percy about the sole survivor of the apocalypse. They also sound a lot like someone who didn’t really give up his Christian faith:

As I walked out in the mystic garden
On a hot summer day, hot summer lawn
Excuse me, ma'am I beg your pardon
There's no one here, the gardener is gone

Ain't talkin', just walkin'
Up the road around the bend
Heart burnin', still yearnin'
In the last outback, at the world's end

Most beautiful prayer written by Bob Dylan, or by anyone else, ever:

"Every Grain of Sand"

Written during Dylan’s much-derided Christian phase, this masterpiece seems randomly to have become a hipster favorite in recent years. Get off my lawn, hipsters! It’s a beautiful song of praise. Emmylou Harris sang this at Johnny Cash’s funeral. Think about that moment for a second.

In the time of my confession, in the hour of my deepest need
When the pool of tears beneath my feet floods every newborn seed
There’s a dyin’ voice within me reaching out somewhere
Toiling in the danger and in the morals of despair

Don’t have the inclination to look back on any mistake
Like Cain, I now behold this chain of events that I must break
In the fury of the moment I can see the Master’s hand
In every leaf that trembles, in every grain of sand

I have gone from rags to riches in the sorrow of the night
In the violence of a summer’s dream, in the chill of a wintry light
In the bitter dance of loneliness fading into space
In the broken mirror of innocence on each forgotten face

I hear the ancient footsteps like the motion of the sea
Sometimes I turn, there’s someone there, other times it’s only me
I am hanging in the balance of the reality of man
Like every sparrow falling, like every grain of sand.