Finding my faith in Tupperware and Taylor Swift 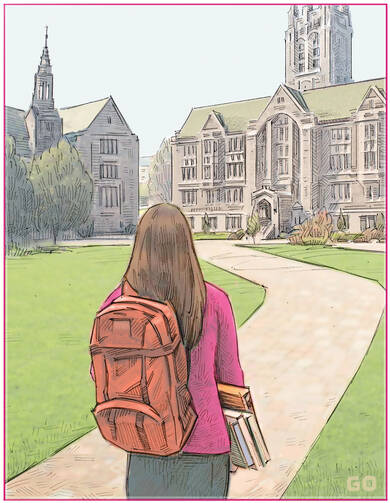 My faith journey began in a Tupperware container. I can’t say why, exactly, I was baptized in such an unusual vessel—perhaps the church was doing a lot of baptisms that day. But while my baptismal font may have been unconventional, my faith wouldn’t be the same without it.

I have been in Catholic school since my first day of prekindergarten at the Boston College Children’s Center. Ever since my 2-year-old self joined Ms. Karen’s class, I have gone through a steady stream of religion classes and holy day of obligation Masses. It would be a lie to say that it has been an easy journey, free of the ups and downs of life. I have questioned the validity of church teachings and struggled with its social declarations. Somewhere in the midst of this struggle I lost my faith.

A year ago I hardly identified as Catholic; I joked that my religious high school had converted me away from Catholicism. At the time, the idea of coming back to the religion that raised me seemed far-fetched and unrealistic. Now, I see my digression from my faith as a vacation from Catholicism—and the best lesson I have ever learned.

I always thought of faith as being based solely on a strict following of every rule in the Catholic Church. It was an impersonal and cold idea that didn’t fit with my “beliefs.” Because of this misunderstanding of faith, I was happy to vote myself off this island of religion. Ironically, separating myself from Catholicism left me on my own little island, without the community I had relied upon since I came out of that Tupperware container.

It seems that every romantic comedy refers to this concept: “If you love someone, let them go; and if they return, they were always yours.” I guess God let me go, or perhaps more accurately, let me choose, because as school got harder and college got closer, I came sprinting back to the community that raised me.

I had an enlightening vacation but it’s good to be home. Coming home I made some changes. I dropped my preconceived notions about church teachings and learned the truth. I went to Mass and treated it as time for reflection rather than the only thing preventing me from sleeping in. The biggest change I made was making my faith my own, rather than something that hinged completely on what I learned in religion class and from other naïve teenagers.

My grandmother always said I was lucky to be raised Catholic. I always thought she meant lucky that I could get a good education, lucky to live in the United States and lucky to have semi-normal parents. In embracing my faith I realized what she really meant. I am beyond lucky to have something to believe in, to know that there is more than me “out there.” I am lucky to be confident enough in my faith that I can find it in everything and everyone.

I truly can find my faith anywhere, and it often comes in the form of music. I was up late on Oct. 26, 2014, one of those nights when the homework never seems to end. I was up so late that it turned into Oct. 27, and my prepurchased copy of Taylor Swift’s new album, “1989,” began to download automatically. So I was up even later, listening to every song and ranking my favorites by rapid-fire texts between my friend and me.

I was just about to call it quits and listen to the rest in the morning when unexpected lyrics floated through my headphones: “You can hear it in the silence, you can feel it on the way home, you can see it with the lights out.” Expecting to hear a plethora of songs about broken hearts and girl-power, I was shocked to hear a song that resonated so much with how I felt about my personal faith. While the song clearly fell into the category of dramatic romance, it struck me nonetheless.

Living out my faith in my mundane day-to-day life sometimes just means believing I can make it through the day. I hear my faith in the moments of silence and reflection with which my teachers often start class. Every Sunday at 11 p.m. I have to leave my volunteer work as an emergency medical technician and drive 30 minutes home. In a subtle way my faith keeps me awake despite the knowledge that school starts in less than nine hours. I can see my faith with the lights out as I fall asleep, believing that tomorrow will be a better day or thankful that today was so good.

I have had a special form of faith ever since my makeshift baptism as an infant. Finding my faith and its role in my life has been a challenge, but well worth it. My faith is what wakes me up in the mornings. It is in the little things in life, the days when the Starbucks barista accidentally gives me a grande instead of a tall. It is the days when I wake up to an email announcing a snow day. It is the days when I have an epiphany moment in calculus class. I cannot think of my faith in terms of next week, let alone the rest of my life. Yet knowing that my faith will be there, and will get me through the tough days and lift me up for the good, is enough.

Zoe Silsby, a graduate of Georgetown Visitation Preparatory School in Washington, D.C., is a freshman at Boston College.

Show Comments (
1
)
Comments are automatically closed two weeks after an article's initial publication. See our comments policy for more.
Lisa Weber
5 years 11 months ago
Everyone has to make an adult faith their own. I think we would keep more people in the church if we acknowledged that fact and prepared young people for it.