How I kept my faith amid Egypt's crackdown on Copts

How I kept my faith amid Egypt's crackdown on Copts 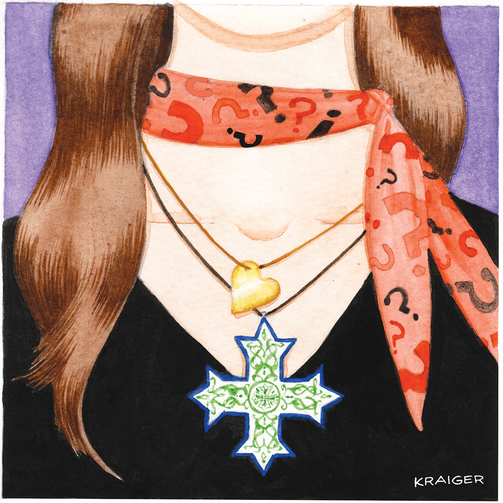 I grew up quietly. My mother was an unswerving volunteer at the Coptic Orthodox church, and I was a Sunday-school teacher throughout my teen years. Our parish priest was a great inspiration of mine. I believed in God and the four walls of my room and my parents and my friends. That was all I knew and that was all I needed and I was content. I learned Bible verses. I studied Coptic hymnology. I told myself I was going to become a deaconess.

Things changed after the Maspero attacks. Months after the ousting of Hosni Mubarak, then the president of Egypt, the air of the January 25 Revolution, as it is known locally, still hung thick in Cairo. It was October 2011 when the media released brutal footage of the Copt-led protests at the Maspero building, which houses the state-run Egyptian Radio and Television Union in the Egyptian capital. Proceeding past hostile Islamist crowds, a group of Copts had gathered to peacefully protest the destruction of a church in Aswan. The peace did not last long.

As a senior in high school, I watched with my fellow church volunteers as Egyptian state forces ran over peaceful Coptic protestors with military vehicles. Their crime: demonstrating against the government’s failure to provide protection and against the church attacks. The massacre resulted in the death of 27 Copts. Fourteen of them were crushed by military armored vehicles.

National news networks aired the footage until they tired of it. Each time I saw it I became angrier and angrier with God. It was God who had formed these people in their mothers’ wombs. It was God who ordained that these people be born in a developing country that recognized them as sub-par citizens. It was God who allowed these people to be born under an oppressive regime. It was God who, at God’s disposal, could have prevented such a thing from happening. Worst of all, 18 years of Christian education told me I had to love the men who drove the army tanks that flattened and crushed the bodies of those innocent youths.

“They are martyrs now,” my priest said. “They have their reward in heaven.” A fellow Sunday-school teacher said, “They should have rallied in front of the Lord instead of in front of people.” My mother simply said, “This was God’s plan.” Their answers, however, did not do justice to the nature of this injustice. I was not at peace. Issues of heaven, free will, politics, religious pluralism and exclusivism all had a name: Maspero. The same faith that had remained so vibrant and unshaken throughout my years of Egyptian Orthodoxy showed signs of crumbling in a matter of months. I began asking myself questions about every concept I knew.

Why did God allow this to happen?

Because it was God’s plan.

Why was this his plan?

God is divine and those his ways.

Where does it say that?

Why do I believe in the Bible?

How do I know that?

Because it says so in the Bible.

When I entered university, I took a class called Faith and Critical Reasoning. It never occurred to me until then that the believers of faiths outside of Christianity had the same reasons for believing in their faith as I did for believing in mine. I rebelled against the faith of the minuteness of my childhood and cursed my Sunday- school lessons and their Jesus stories and my priest who accepted their bloody deaths and my God who let this happen.

This past summer, before my senior year of university, I paid a visit to the Orthodox monastery of St. Antony. My mother was elated, but I just wanted to interview monks for a research paper I was writing. As I sat down to speak to Brother Mina, he asked me the last question I wanted to hear: “Do you love your Christ?” (Bethabey rabena? in Arabic). I wanted nothing more than to bleat out a Sunday-school reply of “Yes!” and be done with it. But I could tell that the monk already knew my real answer. Without warning I collapsed and cried in front of him and told him I knew nothing. It was there in the middle of a desert in California that everything came undone.

Under tired eyes, the old Egyptian monk looked at me and said, “My daughter, faith can only exist in a pained world.” It was like the snap of a rubber band. All these years of internal struggle, I needed to be reminded that to show doubt was not to lose faith. The simple Arabic of the Coptic monk had pushed me to regain my trust in God.

I stayed for five days at St. Antony’s. Every day, Brother Mina asked me if I wanted to attend a liturgy service in the morning, and every morning I kindly declined. It was my last day in the desert when I finally knocked on the brother’s door and told him I wanted to pray. We walked together to the church and he began the Twelfth Hour prayer of the Agpeya, the Coptic Book of Hours:

It was the first time I had prayed in almost four years.

Show Comments (
3
)
Comments are automatically closed two weeks after an article's initial publication. See our comments policy for more.
Paul Schweinler
4 years ago
My dear sister in Christ, especially when we in the west celebrate Pentecost, I am comforted for you that the Holy Spirit continues to hold us tightly in the darkest of times when "God's will" can be so confusing and infuriating ("we look through a glass darkly" St. Paul says). I have had the Coptic Church in the front and center of my heart for over three years now, praying for the Coptic Church each time we gather for worship, but especially on Sunday Mass, and we, I will continue that as long as God gives me breath, and will think and pray also for you. I pray you will, if you haven't already done so, returned to give thanks to you faithful priest at home. God continue to bless you and hold you. Msgr. Paul
Lisa Weber
4 years ago
Belief in God means believing despite what happens in the world. Faith doesn't shield us, it makes us part of the world.
Henry George
3 years 6 months ago
Free Will which allows us to love or hate, help or hurt, share or deprive allows us to doubt, which allows us to grow closer to God who loves us far more than we may ever understand.
Advertisement

Marina Elgawly is a senior at Fordham University’s Lincoln Center campus in New York, where she is pursuing a double major in international relations and theology. This essay is the first-place winner in America’s Generation Faith essay contest.