Who gets to claim Dan Berrigan? 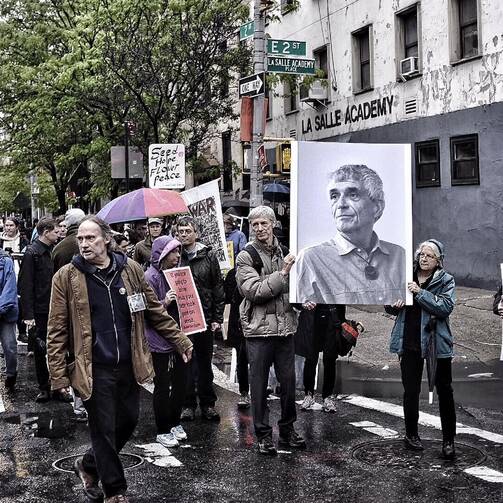 I never saw Daniel Berrigan in the normal vestements of a Catholic priest until his wake on May 5, lying under makeup and lights before the altar at the Church of St. Francis Xavier in New York. Who had? Even in old pictures from long before I met him in 2008, he preferred a more beatnik kind of vestments—all black, with a bold pendant hanging from his neck—a costume skillfully attuned to the persona he both embodied and portrayed. Many times I’ve heard him say Mass in his living room, with words deviating just enough from the standard script to remind you what it really means. He was, to me, fully a priest—theologically, mystically, politically. But until seeing his former shell dressed up I’d almost forgotten he was that kind of priest, too. Despite pushing to its limit every priestly rule he thought worth pushing, Dan remained, faithfully, a normal Catholic priest.

Dan is dead; long live Dan. But how? When will the canonization process begin? Who will claim miracles, and who will raise funds? Who will stand in the way? What crusades of his will we discard for expediency? There are many choices. Which unworthy inheritors will supplant his words and meanings with their own? I could be one of them.

I knew Dan through a glass, darkly. He was already nearing 90 when we first met, and what I received from him was mainly kindness and encouragement, with watery eyes as I told him stories from the front lines of my work as reporter on the beat of apparent lost causes. But I also knew people who’d been around him much longer, people who loved him but who would sometimes let slip the signs of the wear from knowing the younger Dan, a man who could be uncompromising and demanding and stubborn, unimpressed by their particular brilliance when there was a war to be stopped and an arsenal that needed beating into ploughshares. Seeing those signs, I felt sure I would have earned his wrath. I share many of his convictions but very little of his courage. 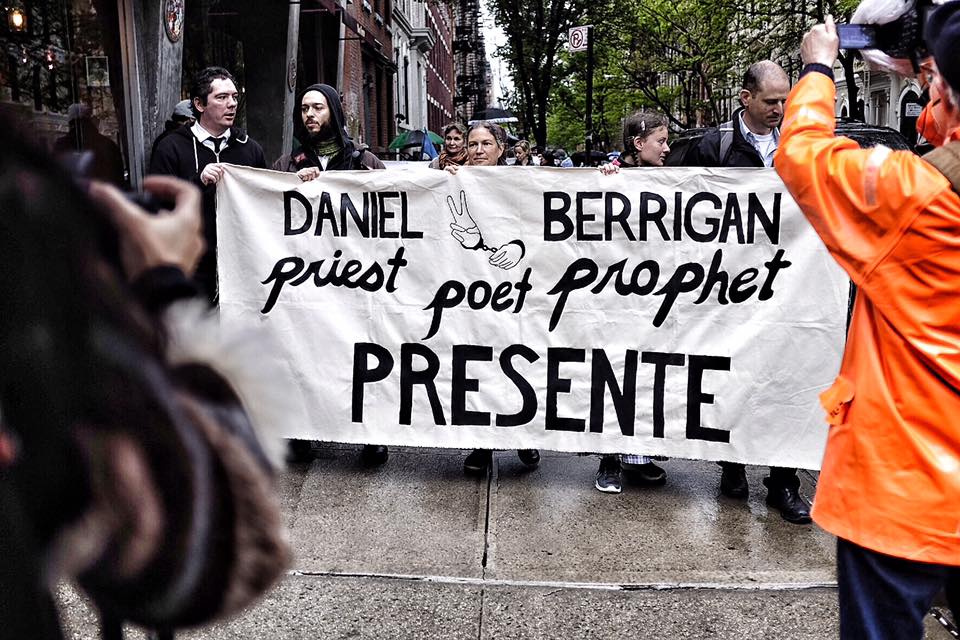 His late-life friends were not all fellow jailbirds and enemies of the state. His chief purveyor of martinis was a woman whose former husband Dan had cared for while he was dying of AIDS. They went to movies together. There were a couple of actors who were planning for his 95th birthday. There were the brother priests he’d shared a home with and faced eviction with in old age. These were the people who surrounded him because he was him and they were them, not so much because of the cosmic struggles against the principalities of the kingdom of death that he represented. Not that those struggles weren’t a very, very important part of him—but they were not all of him. For all that he could represent, and sought to represent, he succeeded because he remained persistently human.

Now begins the time of claiming, and there’s nothing Dan can do. It has already, in truth, begun. I have participated in it. I remember having conversations with him and trying to remember his exquisite words word-for-word so that, when the day of his passing came, I could recite them and claim them and offer them as a contribution to his legacy. I think he saw this happening around him. In the last years he was weak—his voice faint and his hearing poor—but the words one could make out indicated an awareness that bordered on omniscience.

I can’t remember whether I ever told Dan, for instance, that I once made a pilgrimage to the cottage on Block Island, on the property of his friends William Stringfellow and Anthony Towne, where he hid from the F.B.I. after burning draft cards at Catonsville and where he would later go to rest and write. The friend I went there with, after hearing about Dan’s death, visited again the following day.

We mean well when we offer such tribute, but any honor one can pay falls flat against a line of his poetry or an evening of hard-earned friendship. And in come the political ironies—like the U.S. bishops championing the sainthood of Dorothy Day, who is on record saying quite explicitly, “Don’t call me a saint.” I heard second-hand a story from the last days in which one of his brother priests showed Dan a spread in some churchy publication honoring him—probably an entity that had attempted to undermine or neutralize his agitations decades ago—to which he reportedly muttered, in Latin, “Too little, too late.”

Dan’s funeral on May 6 packed Xavier to its limits. By the time a couple hundred of us arrived from a rain-drenched peace march from the Catholic Worker houses, accompanied by the blaring horns of the Rude Mechanical Orchestra, there were hundreds more who’d already filled up the pews. The spirit was that of a festival, a holy feast, yet starring the family members who had simply lost a person they loved. When the Mass was over, in the final eulogy, Dan’s neice Frida Berrigan referred to how “he would lift his eyes in a particular way when he wanted to be rescued from a conversation with someone”—and then, looking out to the masses before her, added, “I’m sure no one in this room he would ever want to be rescued from.” His fearsome bullshit detector seemed to reach out from the by-then-closed coffin. 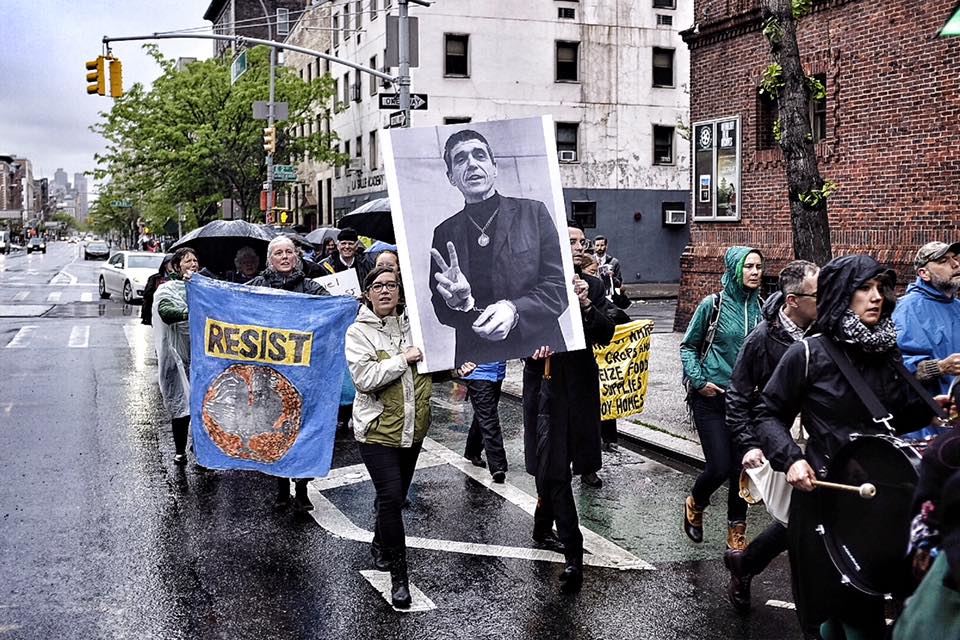 While Dan was a master of representation, after all, he considered it no substitute for incarnation. What are you doing? What must be done? It’s telling and right, I think, that Frida and other visiting members of the family stayed during the funeral at Benincasa Community, a new home in the city to young people who work with and feed the poor. That honest labor is at least as good as any of the partial representations or tributes we can offer, which are now what we have left of him.

At the wake, with the coffin still open, I brought my 4-month-old son Daniel to meet Dan for the first and last time—stiff body to wiggly boy. Daniel surely won’t remember when he grows up, but if he were to, it would be a memory of Dan in those uncharacteristic vestments. It’s the best introduction we could manage. That will have to do.

Nathan Schneider
@ntnsndr
Show Comments (
2
)
Comments are automatically closed two weeks after an article's initial publication. See our comments policy for more.
Bruce Snowden
6 years 7 months ago
Saints among us like Jesuit Priest Daniel Berrigan and we didn’t know! His as Nathan Schneider might rightly say no “bull shit” sanctity, an Instrument of Peace of sweat, of agony, misunderstood, imprisoned and maligned, imaging the Prince of Peace, his mission identical to the mission of Christ still continuing all over the world! Chesterton asserted that Christianity hasn’t failed, it just hasn’t been tried! Dan Berrigan’s Christianity too – it hasn’t failed, it just hasn’t been applied! Back in the 60s for me more than fifty years ago, I remember Father Berrigan, Dorothy Day too, both of them stars in the turbulent galaxy of Peace Activism, their causes, their virtues, heroic. Telescoping their souls the Church will recognize the face of Christ and the Lord, maybe impatiently will say, “What are you waiting for? Do it!” Saint Daniel? Saint Dorothy? Perfect!
richard mcgarry
6 years 7 months ago
Thank you for your wonderful article on Father Dan. I attended the wake and was deeply moved by the joy of the people who gathered to honor and give thanks for this beautiful disciple. I will do my best to live with a double dose of Dan. Peace, Rich McGarry