Skip to main content
FaithSigns Of the Times
May 16, 2016 issue 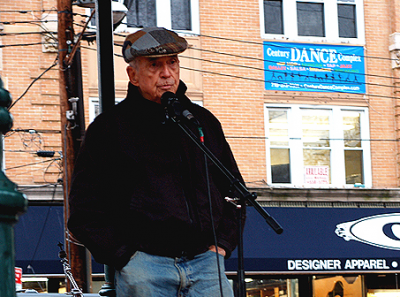 Daniel Berrigan, the Jesuit priest and acclaimed poet who for decades famously challenged U.S. Catholics to reject war and nuclear weapons, died on April 30. He was 94. He was a Jesuit for 76 years and a priest for 63 years. Father Berrigan passed away at Murray-Weigel Hall, a Jesuit residence on the campus of Fordham University in the Bronx, N.Y., surrounded by family and friends.

His niece, Frida Berrigan, daughter of his late brother Philip, wrote in announcing his passing: “We reflect back on his long life and we are in awe of the depth and breadth of his commitment to peace and justice.

“We are aware that no one person can pick up this heavy burden,” Ms. Berrigan wrote, but “there is enough work for each and every one of us. We can all move forward Dan Berrigan’s work for humanity.”

Her uncle was at peace, she said. “He was ready to relinquish his body. His spirit is free, it is alive in the world and it is waiting for you.”

Daniel Berrigan undoubtedly stands among the most influential American Jesuits of the past century, joining the likes of John Courtney Murray and Avery Dulles. Priest, poet, retreat master, teacher, peace activist, friend and mentor, he is the author of more than 50 books on Scripture, spirituality and resistance to war. Berrigan received the Campion Award from America in 1988.

A literary giant in his own right, he was best known for his dramatic acts of civil disobedience against the Vietnam War and nuclear weapons. He burned draft files with homemade napalm and later hammered on nuclear weapons to enact the prophecy of Isaiah that “they shall beat their swords into plowshares” (2:4). His actions challenged Catholics and all Americans to re-examine their relationship with the state and reject militarism. He constantly asked himself and others: What does the Gospel demand of us?

At age 18, Berrigan entered the New York Province of the Society of Jesus. During his first teaching assignment, at St. Peter’s Prep in Jersey City, N.J., in the late 1940s, Berrigan brought students across the Hudson to introduce them to the Catholic Worker. They often attended the “clarification of thought” meetings on Friday evenings, when speakers addressed topics of importance to the young Catholic movement. There he met Dorothy Day.

“Dorothy Day taught me more than all the theologians,” Berrigan told The Nation in 2008. “She awakened me to connections I had not thought of or been instructed in—the equation of human misery and poverty with warmaking. She had a basic hope that God created the world with enough for everyone, but there was not enough for everyone and warmaking.”

After being ordained a priest on June 19, 1952, Berrigan went to France for a year of studies and ministry, the final stage of Jesuit formation, and was influenced by the Worker Priest movement. He professed final vows on the feast of the Assumption in 1956. Berrigan taught French and philosophy at Brooklyn Preparatory School from 1954 to 1957, won the prestigious Lamont Poetry Prize in 1957 for his first book of poetry, Time Without Number, and then taught New Testament at Le Moyne College in Syracuse, N.Y.

In 1963, he embarked on a year of travel, spending time in France, Czechoslovakia, Hungary, Italy, South Africa and the Soviet Union. He encountered despair among French Jesuits over the situation of Indochina, as the United States ramped up military involvement in Vietnam.

Berrigan returned home in 1964 convinced that the war in Vietnam “could only grow worse.” So he began, he later wrote, “as loudly as I could, to say ‘no’ to the war…. There would be simply no turning back.”

Berrigan regularly corresponded with Thomas Merton, Dorothy Day and William Stringfellow, among others. He also made annual trips to the Abbey of Gethsemani, Merton’s home, to give talks to the Trappist novices.

In Conjectures of a Guilty Bystander (1966), Merton described Berrigan as “an altogether winning and warm intelligence and a man who, I think, has more than anyone I have ever met the true wide-ranging and simple heart of the Jesuit: zeal, compassion, understanding, and uninhibited religious freedom. Just seeing him restores one’s hope in the Church.”

The year 1968, a dramatic period of assassinations and protests that shook the conscience of the United States, proved to be a watershed year for Berrigan. In February he flew to Hanoi, North Vietnam, with the historian Howard Zinn and assisted in the release of three captured U.S. pilots. On their first night in Hanoi, they awoke to an air-raid siren and U.S. bombs and had to find shelter.

As the United States continued to escalate the war, Berrigan worried that conventional protests had little chance of influencing government policy. His brother, Philip, then a Josephite priest, had already taken a much greater risk: In October 1967, he broke into a draft board office in Baltimore and poured blood on the draft files.

Undeterred by the looming legal consequences, Philip planned another draft board action and invited his younger brother to join him. Daniel agreed.

On May 17, 1968, the Berrigan brothers joined seven other Catholic peace activists in Catonsville, Md., where they took several hundred files from the local draft board and set them on fire in a nearby parking lot, using homemade napalm. (Napalm is a flammable liquid that was being used extensively by the U.S. military in Vietnam.)

He said in a statement, “Our apologies, good friends, for the fracture of good order, the burning of paper instead of children, the angering of the orderlies in the front parlor of the charnel house. We could not, so help us God, do otherwise.”

Berrigan was tried and convicted for the action. When it came time for sentencing, however, he went underground and evaded the Federal Bureau of Investigation for four months.

“I knew I would be apprehended eventually,” he told America in an interview in 2009, “but I wanted to draw attention for as long as possible to the Vietnam War and to Nixon’s ordering military action in Cambodia.”

The F.B.I. finally apprehended him on Block Island, R.I., at the home of the theologian William Stringfellow, in August 1970. He spent 18 months in the federal prison in Danbury, Conn. He and Philip appeared on the cover of Time magazine on Jan. 29, 1971.

But the brothers, lifelong recidivists, were far from finished.

On Sept. 9, 1980, Daniel and Philip joined seven others in breaking into the General Electric missile plant in King of Prussia, Pa., where they hammered on an unarmed nuclear weapon—the first Plowshares action.

Berrigan’s later years were devoted to Scripture study, writing, giving retreats, correspondence with friends and admirers, mentorship of young Jesuits and peace activists and being an uncle to two generations of Berrigans. He published several biblical commentaries that blended scholarship with pastoral reflection and poetic wit.

From 1976 to 2012, Berrigan was a member of the West Side Jesuit Community, later the Thompson Street Jesuit Community, in New York City. During those years, he helped lead the Kairos Community, a group of friends and activists dedicated to Scripture study and nonviolent direct action.

Even as an octogenarian, Berrigan continued to protest, turning his attention to the U.S. wars in Afghanistan and Iraq, the prison in Guantánamo Bay and the Occupy Wall Street movement. Friends remember Daniel Berrigan, S.J., as courageous and creative in love, a person of integrity who was willing to pay the price, a beacon of hope and a sensitive and caring friend.

This article also appeared in print, under the headline “Daniel Berrigan: Poet, Priest, Prophet,” in the May 16, 2016, issue.

Luke Hansen, S.J., is a former associate editor of America.