Growing into an adult understanding of God 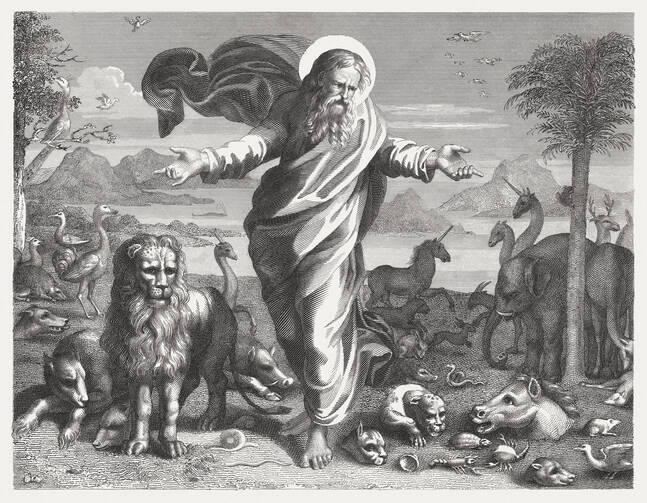 Illustration of Genesis, creation of the animals. (iStock)

‘I don’t believe in that God either.”

This is a comment I found myself making relatively often at get-togethers over the recent holiday season. Usually it’s in the context of a conversation where I explain to someone what I do for a living.

Generally the exchange is a variation on the following: I’ll say, “I’m a musician and writer,” which often elicits some genuine curiosity regarding what I write about. When I respond, “I write a lot about the intersection of culture and faith,” this is frequently met with a somewhat quizzical look. Not at all disdainful or suspicious, it’s more like an expression of surprise that these two topics ever intersect at all.

This sometimes opens up a conversation about religion and spirituality, in which I try to explain how my own faith journey has been deeply informed by musicians, writers, filmmakers, etc.—artists who ask “big questions” in their work, questions in which something is at stake about what it means to be alive in a particular time and place.

After my attempts at clarification however, the question I often get asked is something along the lines of, “So, do you actually go to church...like, every week?”

For more than a decade, I’ve had the opportunity to explore the margins of religion and faith—the unaffiliated and unchurched, the seekers and the spiritual. Overwhelmingly, the people I’ve encountered have been intelligent, successful adults who have accomplished a great deal in their personal and professional lives. But the contrast is often stark when those accomplishments are juxtaposed with their spiritual understanding.

It would be inappropriate—and cause for concern—for a 30- or 40-something to behave like a 12-year-old in personal relationships or the work environment. And yet, all too often, these same people’s relationship to God and faith and their understanding of its role in their lives is frozen in early adolescence and hasn’t been thoughtfully engaged since their confirmation or bar mitzvah.

This isn’t an exclusively Catholic phenomenon. The challenges involved in developing an adult faith hold true across traditions. I remember an interview I worked on a few years ago with a smart, young musician who had some serious indie rock cred. He was considered a bit of a traitor among some fans because the Pentecostal Christian faith of his childhood that had influenced his early music had been replaced by a new-found atheism. The more I read his thoughtful answers about the process that led him to abandon Christianity, I couldn’t help but think, “You’re not an atheist; it’s just that the tools you were given to understand faith as a child no longer worked as an adult and your faith wasn’t able to grow up with you.”

Developing spiritual maturity can be difficult in a culture where the conversation around faith seems to be set up as a contest between evolutionary atheism and fundamentalist creationism, a false choice if ever there was one.

Adolfo Nicolás, S.J., superior general of the Jesuits, was right when he identified “the globalization of superficiality” as one of the great dangers facing the world today. The overwhelming tidal wave of information that bombards us can be insidious and anaesthetizing because it encourages us to simply skip along the surface of reality. The gods of data and information fill our brains but distract us from going deeper. Deepening requires that we constantly seek what is authentically human. It requires that we grow up and “put away childish things.” I believe in a God who speaks to us as adults at our most profound depths through beauty and truth.

This is the God of Coltrane’s “Love Supreme” and Radiohead’s “OK Computer,” Handel’s Messiah and Leonard Cohen’s “Hallelujah,” Walker Percy’s “The Moviegoer” and John Michael McDonagh’s “Calvary,” Chagall’s “White Crucifixion” and Archie Rand’s “The 613.” I believe in the God of Dorothy Day and Martin Luther King Jr., the God of St. Francis of Assisi and St. Ignatius Loyola and the God of my 3-year-old niece’s laughter.

So please don’t talk to me about your God who will inevitably be eclipsed by science and technology or your God that you learned as a child was obsessed with sexual morality to the exclusion of all else and existed only to judge and condemn.

I don’t believe in that God either.

Bill McGarvey,a musician and writer, is the author of The Freshman Survival Guide, owner of CathNewsUSA.com and was the longtime editor in chief of BustedHalo.com.

@billmcgarveybillmcgarvey@gmail.com
Show Comments (
5
)
Comments are automatically closed two weeks after an article's initial publication. See our comments policy for more.
Christine T.C.
6 years 4 months ago
A God who asks the big questions is what everyone is looking for. You can see it in our movies, art, music, and everywhere! Great article!
Bill McGarvey
6 years 4 months ago

Leo Cleary
6 years 3 months ago
What a refreshing piece. It reminds me of Teilhard and others who have seen God in ways that help us appreciate God's expansiveness. Not a God solely just attending to our sins and faults. I see Pope Francis acting in a similar way as Bill and Teilhard. He does not denying the losses and problems in life yet does not want us to be defended by these.
Lisa Weber
5 years 4 months ago
Thank you for a good article. I think the Catholic Church is a difficult place for a woman to develop a mature faith because women are treated like children in the church. We are not allowed to speak at Mass and we have little say in the decision-making in the church. We do not have role models of women publicly talking about what mature faith means. Endless servitude is not inspiring and people leave without learning that there is more to faith.
Miguel Panão
5 years 4 months ago
This is a wonderful and thoughtful post. I share a similar experience. And if you allow me the sharing. I'm a professor at the university in engineering and a writer. And what do I write about? Science and Faith! This is by for one of my favourite topics and an essential part of my spiritual journey. This is why last Summer I published a short book with a personal experience lived with a friend of mine about it. If you're interested, here is the link: http://amzn.to/2hHGsSP it's about a catholic converted to atheism and my answers to his 12 questions of faith.