The joy of having loud and messy kids at Mass 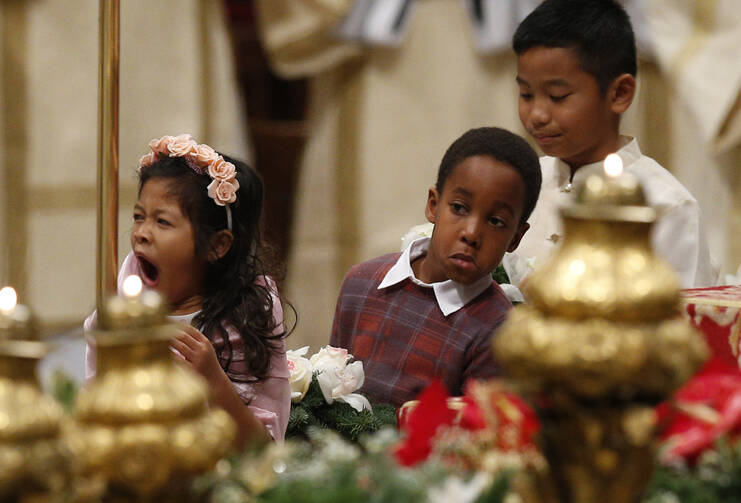 Children wait to present flowers at a figurine of the baby Jesus as Pope Francis celebrates Christmas Eve Mass in St. Peter's Basilica at the Vatican Dec. 24. (CNS photo/Paul Haring)

Usually the daily noon Mass on campus is attended by the familiar dozen or so faculty and staff and students and neighbors; but today, to my amazement, there are 4-year-old twin boys in front of me, complete with parents, the father immensely tall and the mother adamantly not.

The noon Mass is legendary for starting on the button and never going more than 25 minutes because afternoon classes start at 12:30 p.m. and you want to give students a chance to make their flip-flopped sprint across campus. For the first five minutes the twins sit quietly and respectfully and perhaps even reverently, each in his seat between mom and dad. This does not last. At 12:07 p.m. I see the first flurry of fists and elbows as they jockey and joust. At 12:11 p.m. one of them, incredibly, pulls a bunch of grapes from his pocket and begins to eat some and to lose the rest on the floor. At 12:13 p.m. there are easily a dozen grapes and both boys under the chairs. At 12:15 p.m. the mom, clearly a veteran of these sorts of things, pulls two cookies from her pockets for the boys. At 12:20 p.m. the dad finally bends down from his great height and tersely reads his sons the riot act, a moment I have been waiting for with high fraternal glee, for I have been in his shoes. I have been at Mass in this very chapel with my small twin sons, who have dropped Cheerios from the balcony onto the bald spots of congregants below and stuck their arms into the baptistry just to see what it would feel like (it’s cold and wet, one son said, indignantly) and made barnyard noises at exactly the wrong moments and ran all around the chapel shaking sticky hands with startled, bemused congregants at the Sign of Peace.

"If there are no little kids at Mass, pretty soon there won’t be any Masses."

After Mass I say to the celebrant with a smile that it is not every day we are graced by rambunctious ruffians who scatter grapes and crumbs on the floor and giggle and yawn and shimmy and snicker and lose their shoes and drop hymnals on the floor with a terrific bang and pay no attention whatsoever to the Gospel readings and the homily and the miracle of the Eucharist but rather gaze raptly at the life-size cedar crucifix and try to blow out a candle on the altar as their parents carry them up for a blessing and say Hi! to the grinning priest as he lays his hand upon their innocent brows and spend the last five minutes of Mass sitting in the same single seat trying to shove the other guy off but only using your butt and not your hands; and the priest, unforgettably, says this to me:

I love having little kids at Mass. I love it when they are bored and pay no attention and squirm. I love it when they get distracted by a moth and spend five minutes following the moth’s precarious voyage among the lights. It’s all good. They are being soaked in the Mass. They hear the words and feel the reverence and maybe they even sense the food of the experience, you know? Sometimes people complain and make veiled remarks about behavior and discipline and decorum and the rapid dissolution of morals today and stuff like that but I have no patience for it. For one thing they were little kids at Mass once, and for another if there are no little kids at Mass, pretty soon there won’t be any Masses. You have to let kids be kids.

Why I want my daughter to grow up in a noisy, chaotic Catholic Church
Katie Prejean McGrady

I love having little kids at Mass. If you are distracted by a little kid being a little kid you are not focused on what’s holy. Little kids are holy. Let it be. My only rule is no extended fistfights. Other than that I don’t care about grapes and yawning. I think the cadence and the rhythm and the custom and the peace of the Mass soak into kids without them knowing it. That’s why a lot of the students here come back to Mass, I think—it sparks some emotional memory in them, and once they are back at Mass then they pay attention in new ways and find new food in it. It’s all good. The more the merrier. I don’t mind dogs when I celebrate Mass, either. For one thing they are generally better behaved than little kids, but for another I figure the Mass soaks into them too, and how could that be bad? You know what I mean?

If you are distracted by a little kid being a little kid you are not focused on what’s holy. Little kids are holy. Let it be.

I say I do know very well what he means and we shake hands and he heads to the sacristy to disrobe and I head back to work. But about halfway back to my office I feel awfully sad that I do not have grapes and cookies in my jacket pockets. I don’t even have remains of ancient Cheerios anymore, and there were years there when my pockets were so filled with brittle crumbs that birds followed me in rotation, sparrows in the morning and crows in the afternoon. For a minute I want to shuffle back to the chapel and catch that tiny mom and ask her for a cookie, just because, but then I realize that she will think I am a nut and I remember that I had my run as the dad of little kids squirming at Mass. It was a sweet glorious unforgettable run, too, and now it’s someone else’s turn, and how good and holy that is, that there are still little kids under the seats, paying no attention whatsoever.

Brian Doyle was a much loved writer and poet and the longtime editor of Portland Magazine. He passed away in May 2017.