‘Would you baptize an alien?’ and other questions you'd want to ask Vatican astronomers 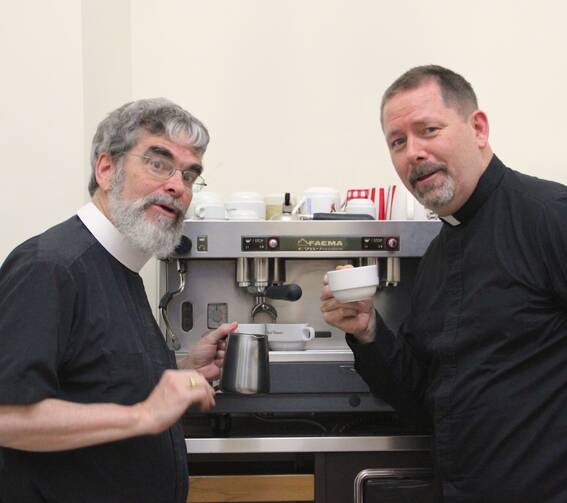 Brother Guy Consolmagno, S.J., and Father Paul Mueller, S.J., are American Jesuit planetary scientists for the Vatican Observatory based at the pope’s summer residence in Castel Gandolfo, Italy. They are co-authors of the forthcoming book “Would You Baptize an Extraterrestrial? and Other Questions from the Astronomers' In-box at the Vatican Observatory,” due from Image Doubleday on Oct. 7.

On July 2, Brother Consolmagno received the Carl Sagan Award from the American Astronomical Society for his popular writing and speaking as an active planetary scientist communicating to the general public. A graduate of University of Detroit Jesuit High School, he earned a B.A. and M.A. in planetary science from the Massachusetts Institute of Technology, and a Ph.D in the same subject from the University of Arizona’s Lunar and Planetary Laboratory. After postdoctoral research, he taught at Harvard and MIT before moving to the Vatican Observatory, where he is curator of the Vatican Meteorite Collection in addition to his work as an astronomer researching the connection between meteorites and asteroids with small bodies in the solar system. Author of more than 40 refereed scientific papers, he has also written a number of popular books and appeared in various television and radio programs.

Father Mueller is a philosopher of science who serves as superior of the Jesuit community at Castel Gandolfo. A graduate of St. Xavier Jesuit High School in Cincinnati, he holds a B.S. in physics from Boston University and an M.A. in philosophy from Loyola University of Chicago. He also holds M.Div and S.T.M. degrees in theology from the Jesuit School of Theology at Berkeley and a Ph.D in the philosophy of science from the University of Chicago. He completed his doctorate through Chicago’s interdisciplinary Committee for Conceptual Historical Studies of Science. In his dissertation, he provided a translation and commentary on Marin Mersenne’s Questions Théologiques, Physiques, Morales et Mathématiques (1634), and explored how practices and concepts of early modern science were informed and influenced by practices and concepts from biblical textual criticism.

In their academic work, Brother Consolmagno and Father Mueller share a concern to preserve the distinctions between religion and science. This focus is evident in their new book, written for a popular audience. On July 18, I conducted the following interview about the book with them by email.

The faith and science of Georges Lemaître, father of the Big Bang
Sean Salai

Why did you write this book?

Guy: We wanted to show how a life integrating faith and science can be lived; how we actually live it. Science and faith are not big, static “books of facts.” Both of them are growing and changing, and both of them involve dialogue and conversation.

Paul: And so we wrote the book in dialogue form, as a series of conversations between Guy and me. That let us keep things informal, and it allowed space for us to disagree with each other at times.

Our conversations revolve around questions that we get all the time at the Vatican Observatory. Sometimes we answer the questions. More often we try to deepen the questions, challenging their presuppositions respectfully and with a bit of humor.

Guy: For the most part, these are questions that don’t have “pat” answers. These are topics that you can spend your life pondering in your heart.

Paul: The various conversations are set at specific locations that are relevant to the question at hand.

Guy: After all, science and faith aren’t abstractions. They are lived out in specific places and times, by specific people.

Paul: We are aiming at people who are interested in science but dubious about faith, but also at people of faith who feel a bit at sea regarding science and how it relates to faith.

Guy: Our typical readers will probably be college-educated Catholics. We don’t assume they’ll all be scientists, though we try hard to get the science right! We’re not trying to convert the unbeliever. We’re trying to help intelligent, well-read Catholics to enjoy their faith in a deeper and more integral way, and to see the truths they already hold in many different new lights.

Would you baptize an extraterrestrial?

Guy: Only if she asks!

Paul: Just raising that question pushes me to ponder more deeply the meaning of my own baptism. If we can find God in all things, maybe an extraterrestrial could teach us something new about Jesus Christ and the Good News! I’d like that.

Does science disprove the Bible?

Guy: Science doesn’t prove. Science describes. The Bible isn’t a book of propositions to be proved or disproved; it’s a conversation about God. So that question presupposes a radically false idea of what science is, and what the Bible is.

Paul: We never ask if science disproves Shakespeare’s Romeo and Juliet, though the play includes statements that are at odds with modern science. We never ask if science disproves Maximilian Kolbe’s self-sacrificing love, though his own knowledge of science would be seventy years out of date today. Lovers don’t look to science to prove the reality of their love. Why on earth would we want to go to science for proof of the reality of God’s love?

How does the Bible inform science?

Paul: Science gets along just fine, thank you, without needing to make any reference at all to the Bible. But if you’re going to do science at all, you have to first presuppose that the natural world is somehow orderly and intelligible. Our expectation that the world is that way emerges from the Biblical creation stories. Of course the Bible also informs our moral framework for thinking about how to use our scientific knowledge – will we use science for domination and power, or for service and love?

Guy: Revealed religion helps me understand why I want to do science. Science – understanding this physical world we live in – is something everyone wants to do. It’s what an infant is trying to do when he wants to touch and taste everything in reach; it’s what a toddler is trying to do when she keeps asking, “Why?” I found the hunger for science in my students when I was a Peace Corps teacher in the third world. So, why? Why this hunger? What are we really hungry for?

It reminds me of what the German theologian (and Jesuit) Karl Rahner called the “wovorher” and “woraufhin” – the thing outside us we are looking for, and the thing inside us that drives us to look. Ultimately it is the hunger for God: God the Creator.  When you understand that, it changes the way you do science. The temptation is to do science for honor or glory, or financial success, or tenure. But those aren’t the deeper reasons why we’re driven to ask why. And achieving them won’t satisfy that hunger.

What do you say to people who believe there’s no way to prove God’s existence?

Paul: They’re right, but they are missing the point. No one can prove to you that they love you. If you insist that they prove it, you’ll just end up driving them away. It’s through loving and being loved that we know and feel the reality of love. And God is Love.

Guy: God is not the end product of some line of logic. God is bigger than any proof. If any logical system could prove, or disprove, God, then that system would be bigger than God, more basic than God, have more power than God; so what it would wind up proving, or disproving, would be something far different from the God I believe in. God is the logos, the foundation for why logical proofs are themselves possible.

What’s the greatest congruence between your Catholic faith and your scientific work?

Guy: Beauty. I know I have touched God when I experience the joy of living in beauty. The universe is beautiful. It didn’t have to be; it could have been just logical, or it could have been hopeless chaos. But it isn’t. It’s beautiful. And the way science can explain it is also beautiful. Indeed, a good compass to use when testing different theories is to look for the ones with the greatest internal elegance.

Paul: The experience of failure-with-hope. Scientists suffer refutation and failure all the time. But that’s how science advances, by building on dearly-held theories which have been found wanting. And people of faith know all too well that they are sinners – they fail all the time. But through the hope and power of Christ’s resurrection we are forgiven and saved. In both science and faith, we strive to come to see the world the way God sees it, from a God’s-eye perspective.

What’s the greatest tension between your faith and your scientific work?

Paul: Science requires a kind of impersonal objectivity which can have de-humanizing effects. Yet faith calls us to be become ever more deeply human and personal. That can feel like a tension, at times.

Guy: Science and religion are done by human beings, and we bring all our human failings to both. They are most in tension where there is a lack of faith in the unity of truth; where we allow ourselves to be distracted by fear, envy, or greed.

The faith and science of Georges Lemaître, father of the Big Bang
Sean Salai

Do the Big Bang theory and evolutionary theory contradict Christianity?

Paul: Nope. Christians have faith in Jesus, who is the Way, the Truth, and the Life. The Truth is our friend – including whatever truths we learn from science.

Guy: To quote Saint John Paul II, “Truth does not contradict truth.” We don’t (yet!) understand fully how the universe was made or how life evolved. And we don’t (yet!) understand the full truth of the Christian faith. I should hope that humanity will know a whole lot more about both those things a thousand years from now. And even then we’ll still know that our knowledge is incomplete.