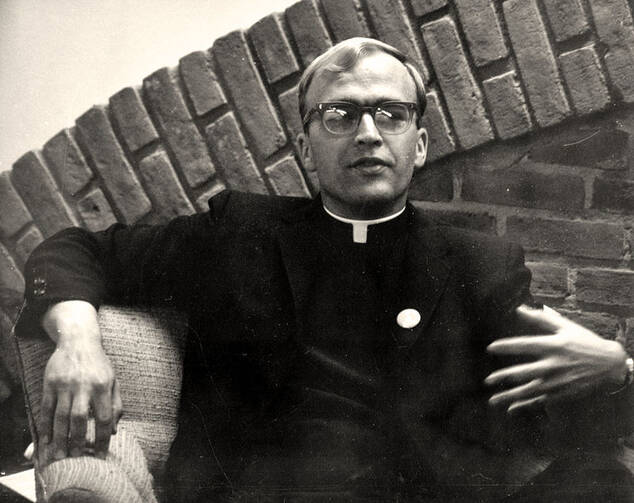 Father William Dubay was one of the most famous and controversial young American priests of the 1960s. In his pastoral apostolate he was best known for his efforts to break down racial segregation in the Archdiocese of Los Angeles and for his proposal that the priesthood be unionized. His most dramatic move came in 1964, when he publicly called upon Pope Paul VI to remove Cardinal James Francis McIntyre for his failure to support desegregation. Father Dubay was reassigned, censored and eventually suspended from the priesthood. Although the editors of America did not agree with some of his ideas, they did defend his right to a fair trial. By 1968, he had left the priesthood and married Mary Ellen Wall of Seattle.

In 1969, he told a reporter that he had not been to Mass in some time and perhaps should be called an atheist. I had met Father Dubay in California three years prior and wrote about our encounter in America. Earlier this year, when his new memoir came across my desk, I wrote about him again on our website. He replied to my article, saying that his concept of God had developed, so we invited him to tell us how.  — Raymond A. Schroth, S.J.

My faith has remained pretty much the same since I left the priesthood in the 1960s.

As I wrote in my book, “God has become rather earthy.” I had been reading Alan Watts and was impressed with the teaching that God is the “soul of the world,” making nature the face of God.

The universe is God’s workplace, and creation is an ongoing project. As intelligent beings, our job is to pay close attention to every phase of the living universe.

We are also asked to join him in making the world a better place for all his creatures.

The aboriginal peoples of Australia seem to be very good at this. They developed an intimate knowledge of every plant, animal and water source on the continent.

Instead of domesticating animals, they domesticated their environment. They worked to optimize the health and wellbeing of every species. They adopted a life of extreme simplicity, rejecting not only technology and agriculture but even clothes.

By the time the British arrived in Australia, the whole continent was a well-managed garden. This attention to nature guaranteed the survival of their own species, no matter how drastically the climate changed. They saw this work of tending nature as sacred and the means of achieving their destiny.

They passed on their great volume of knowledge through their “song lines” and their art, ritual and literature. Teaching was central to their lives and ours.

Our duty is also to teach. The voice we hear in our head is not talking to itself. It is telling others something. We are all born communicators. What Chaucer wrote about the monk is true of us all: “And gladly wolde he lerne and gladly teche.”

As Christians, we have a special mandate to reduce the suffering and poverty in the world. This means opposing war and capital punishment. Much, if not most, suffering is man-made.

For that reason, I have always felt the obligation to follow human events and get involved in politics. As Father O’Malley told us in moral theology class, “It’s all in the newspapers.”

As to the afterlife, I believe with Aristotle that the soul after death is “not going anywhere without a body.” Besides, life without a body doesn’t appeal to me much at all.

I am more than happy to have been given one body and one life on this earth.

And what a trip it has been!

William Dubay
Show Comments (
4
)
Comments are automatically closed two weeks after an article's initial publication. See our comments policy for more.
Bruce Snowden
5 years 7 months ago
I pretty much agree with William Dubay’s “Earthy” God concept, a credible notion saturating Revelation, the “Earthy” God less perfectly revealed in the OT, but more completely described in the NT through the Incarnation. In the OT God’s “Earthyness” is expressed attributally in mostly negative human images behaviors, awaiting something more perfect yet to come, but in rough sketches anticipating in “God-time” what Paul would say, “whatever is, and whatever is to come, one and the same.” Whereas, in the NT God in all his “Earthyness” from the Womb to the Tomb, starting with Mary’s “fiat,” to completion about three decades later dealing with an empty Tomb, and the shattering Good News, “He is Risen! He is not here!” I also find intellectually and spiritual attractive Mr. Dubay’s quotation from Aristotle, that “the soul is not going anywhere without a body.” I hope the following personal opinion does not violates Catholic Faith, perhaps even enhancing it a little if that’s possible. At death I suggest the human soul goes nowhere without its body, meaning that Resurrection from the dead happens immediately at death. The “old man” replaced immediately with the NT’s “new creation,” hinted by Paul as previously mention in that, “what is and what is to come, one and the same.” With God there is no “past,” no “present” only an everlasting “Now” whatever has been promised in “earthtime” already fulfilled in ”Godtime, gradually unfolding in “earthtime” in surprising ways. God is a God of Surprises and I hope at death a “big surprise” awaits us! How does this happen? I hope to one day find out in the Land of the Living, where I expect to find a “full house” an incalculable number of saints in glorified bodies, not just two, Jesus and Mary, answering my longstanding question, “Why just two?” That question has always puzzled me, why just two? I also find exciting Mr. Dubay’s remark that, aboriginal people of Australia “domesticated the environment” precisely in line with Holy Father Francis’ “Praised Be,” a prophetic teaching inspired by the Holy Spirit honoring our “Earthy” God. It’s heart-pounding for me to realize how close God has come to us, even becoming one of us, If “plucking a rose, disturbs a star” as a Sulfi saying reminds, just think how much we “disturb” “Earthy” God when we carelessly disturb the environment by our non-domesticated disregard of its needs! Just a little comment on some marvelous thoughts by Mr. William. Dubay.
Tomas Faranda
5 years 7 months ago
We are all confused - original sin you know. Mr. Dubay seems especially confused.
German Otalora
5 years 7 months ago
Dear friend, I'm so sorry but you didn't understand one word of the message. You are still stuck to theologies and catechisms. God is the substrate, the underlying real supporting everything. We are just co creators, the whole universe is the face of God. We have to revere, take care and enjoy God as we see it in the whole universe. Next, God's expression is for all human beings, to be enjoyed in plenitud. Therefore fight for equality and justice, as mirrored in the papers and in our brothers and sisters of all the times pst, present and future, is fighting for n equal sharing and enjoying of the face of God.
Henry George
5 years 7 months ago
William Dubay seems to be still caught up in the thinking of the Sixties and to be honest, a rather shallow interpretation of the 60's thought. I admire his working for social justice and his temerity to call out the Cardinal. As for his interpretation of how the Aborigines lived in Australia before the coming of the Europeans - ah - no. Just wasn't the case. If the Aborigines decided they needed to wage war they did - that is why there were no Polynesians in Australia. As for being one with their environment - well better check on that as well.