#BeyondtheHabit: The Power of Sisterhood 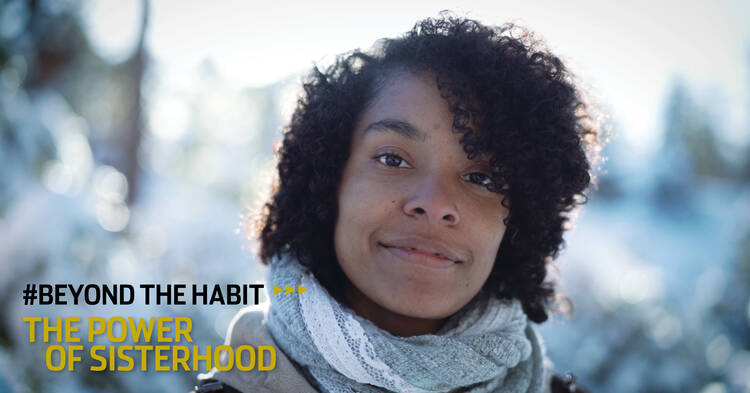 What do you picture when you think of a religious sister? The sometimes-grumpy but loving nuns from Maria’s abbey in “The Sound of Music”? Whoopi Goldberg in “Sister Act”? Or maybe activist sisters like Helen Prejean, Norma Pimentel, or the Adorers of the Blood of Christ, who built an outdoor chapel to block the path of a planned oil pipeline?

No matter what your image of a religious sister is, women religious in the United States are extremely diverse and—dare I say it—extremely cool. This week, to celebrate these amazing women, America Media and the Center for Applied Research in the Apostolate are highlighting six young women religious working all over the country in a variety of ministries and religious orders. They discuss their lives before they were sisters, how they discerned the call to religious life and the joys and struggles of learning to express themselves in the midst of their vocations.

We will post new videos every day from Sept. 23 to 27, so check back at this page and sign up for our newsletter. We hope you enjoy going #BeyondtheHabit with us.

First up in #BeyondTheHabit week, we look at the amazing things that sisters have done in the 300 years since their arrival in New Orleans. The late journalist Cokie Roberts (educated by the Religious of the Sacred Heart!) narrates this delightful animated video explaining how tough-as-nails women religious established some of the first schools and most extensive healthcare systems in the United States. With all due respect to Sister Wendy, this might be the most fun we’ve ever had in a history class.

Sister Monica Nobl Grau was an archaeologist in Peru and Sister María José Correa was a world-class pole-vaulter representing her native Chile before each of them met the Servants of the Plan of God, a new religious order dedicated to evangelization, service and solidarity with the poor.

In this episode, the sisters explain how they went from successful careers in South America to living and ministering to the elderly, students and immigrants in Arizona. They talk about finding joy in their ministry, and Sister María José proves once and for all that she’s still got game.

For Sister Alison McCrary, a community lawyer and activist in New Orleans, joining a religious order was an act of resistance: “The world needs more prophetic voices, and making vows of poverty, celibacy and obedience in a society that values power, money and sex is a radical thing to do.” Sister Alison gives us a tour of the Treme, the historically black neighborhood where she ministers, and explains how her vows help her serve her community.

The Carmelite order is famous for its spiritual masters like St. John of the Cross, St. Teresa of Avila and St. Thérèse of Lisieux. It was reading St. Thérèse’s Story of a Soul that drew Sister Marie Estelle to the order: “I put down the book and...I just said to my mom, ‘I have to be a Carmelite!’” Sister Celine and Sister Marie Estelle explain how their school and hospital ministries are rooted in their deep spirituality and early-morning prayers, and share both the humor and the profound lessons that come from wearing a habit on the streets of Los Angeles.

When Sister Desiré Anne-Marie Findlay was considering joining the Felician Sisters, she figured she would never dance again. “I thought well, if I enter, sisters don’t dance. I’ll have to leave that behind.” Little did she know, dance would become a key part of her ministry—and her prayer. In this installment of #BeyondTheHabit, Sister Desiré reflects on how she’s overcome her assumptions about who sisters are and what they do, and how she’s learned to make her vocation her own as a black woman, as a dancer and as one of the youngest members of her religious order.

If the person reading this is a disciple of Christ, baptised in water and the Holy Spirit, regularly lives out a life of prayer and sacramental participation and also has some serious thoughts or experience on the subject of dance, would they please help me to see that some dancing might be praying? Just factual and experiential witness and maybe some references from down the ages of the last two thousand years or longer within the Judeo-Christian tradition.