Baking, gardening and puppies: A guide to the comfort watching you need this holiday season 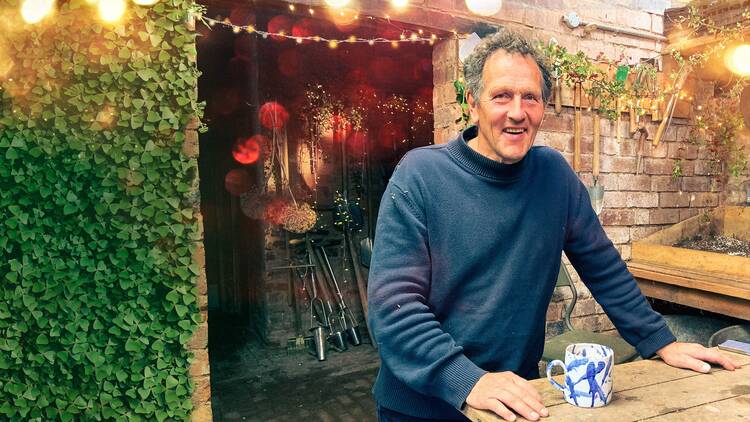 I don’t know about you, but during the holidays I find there are moments when I need to hide away somewhere and recover from all the happy-happy and the merry-merry. My go-to for holiday comfort is generally British TV shows. “Derry Girls,” “Line of Duty,” “Doctor Who”—it doesn’t matter. Any TV trip to the U.K. feels instantly like a vacation.

This year, though, I felt like I needed something a little more intentionally relaxing. (2022, amirite?) So I decided to look into reality-type programming from Great Britain. If you’re looking for something easy amid stressful days, here are some places to start.

British baking shows are pretty much a genre of their own at this point, and as per the TV customs of the U.K., many of them deliver special standalone episodes for the holidays, like “Gordon Ramsay’s Christmas Cookalong” or “Jamie Oliver’s One-Pan Wonders” (both on Britbox).

But I was surprised to find that many of these “Let’s make food for Christmas” programs actually increased my stress levels. Ramsay’s show involves him cooking an entire Christmas meal in 45 minutes (before a live audience, to boot), and to say that is a high anxiety exercise is an understatement. Oliver’s “One-Pan Wonders” Christmas episode is less frenetic, and beautifully shot, but there’s still an awful lot of work involved.

My go-to for holiday comfort is generally British TV shows. Any TV trip to the U.K. feels instantly like a vacation.

For me, the Christmas baking show that really delivered those cozy feels was this year’s “Great Christmas Baking Show” (Netflix), which stars four of the cast members of the brilliant British miniseries “It’s a Sin” competing for Paul Hollywood’s handshake and Prue Leith’s kind approbation. (The secret: Add booze.)

One of the joys of the celebrity version of the “Baking Show” is that the cast has immediate camaraderie. They kid with one another, cheer each other on, and generally feel like a group of friends enjoying some holiday time together far from the maddening crowds. Basically, it’s the perfect fantasy Christmas, and even if it’s not at all what real Christmas feels like, it’s very reassuring.

A second episode that I haven’t watched yet features some fan-favorites from seasons past, including the 2018 finalist, Kim-Joy, who was known for the wildly inventive creatures she would add to all of her bakes. I’m thinking it’s going to be perfect for the day after Christmas.

I know even less about plants than I do about cooking. (Remind me, do plants need sunshine, or is that omelets?) But gardening shows, too, are a British TV staple. And I quickly stumbled onto “Gardeners’ World” (Britbox), which has been running in Britain for more years than I have been alive. For the holidays they are releasing a set of four winter specials.

The thing that immediately hooked me is that “Gardeners’ World” is so quiet. From host Monty Don to the various experts consulted to the ordinary people who show a bit of their garden, everyone speaks almost library-soft. Sometimes there is no one talking at all, and we just listen to the wind or the birdsong as the camera glides gently through a garden. Living in a big city, I had no idea just how starved I am for that kind of stillness.

“Gardeners’ World” is a show that finds salvation in small things. Watching it is the definition of respite.

For those who are into gardening, the show offers plenty of interesting ideas and practices, but to be honest, I was too busy drinking in the gorgeous cinematography to keep track of what kind of potting works well with winter succulents. The show is produced by the BBC, and it has the same appreciation for the visual beauty of life on our planet for which their award-winning nature documentaries are known. Even your standard fir tree or ordinary nature walk looks absolutely transcendent through these lenses. And the various hosts do a tremendous job of bringing out the poetry of each plant, describing what we see with a wonder and delight that is absolutely infectious.

“Gardeners’ World” is a show that finds salvation in small things. Watching it is the definition of respite. I’m not sure I have ever watched a show that felt more like a prayer

Great Britain has the greatest celebrity TV game shows, full stop. And a big part of what makes them so glorious is that they are so completely silly. There’s no money on the table, and generally no ticking clocks either, just a bunch of very funny people saying and doing ridiculous things just to make us feel happy.

For my money the best of the bunch are “Would I Lie to You?” (Britbox) and “Taskmaster” (YouTube). In “Would I Lie to You?” the celebrity contestants are asked to read cards that depict them having said or done outrageous things. They then have to make that sound believable, or if it actually is true, retell the story in a way that sounds ridiculous. This year’s Christmas episode hasn’t dropped yet (and may not for a little while), but truly any episode of this show is a great way to spend a half hour during the holidays. (I most highly recommend any episode starring Bob Mortimer. He is one of the U.K.’s most brilliant comedians andmost persuasive liars.)

In “Taskmaster,” contestants are asked to perform outrageous (and often perplexing) things, which are then judged by comedian Greg Davies and his assistant Alex Horne. The joy of the program lies in seeing the different ways that contestants attack the tasks they are given. It’s really a show about exploiting loopholes in the instructions. Watching people discover shortcuts or miss them are equal delights.

Rather than a Christmas episode, Taskmaster does a New Year Treat.Here’s last year’s.

And for those in the mood for something made a little closer to home, a friend recently introduced me to a whole other kind of seasonal relaxation show: “Puppies Crash Christmas” (Hulu). In this reality program, a dozen adorable puppies are let loose in what has been staged as a family living room on Christmas Day. Wrapped presents sit under the tree, full stockings hang on the mantle, food sits at the ready on the table. Where is the family? At church, perhaps? Locked upstairs? Long since fled? It is no matter, for here there are puppies, and over the course of the next 30 minutes they happily romp about and destroy everything.

Since I first watched “Puppies” and its companion piece, “A Very Kitty Cocktail Party,” I have been trying to understand why I find these shows so enormously relaxing. (And they are; they really are.) Part of it may be the fact that there’s not a single human being to be found in them. This isn’t a pet version of “Home Alone,” where thieves or the family eventually come home and chaos ensues. No, this is more like checking in on your Nest from work and watching your pets suddenly discover where you keep the dog food.

But I think there’s also something deeply cathartic in watching all the hard work that goes into setting up Christmas get systematically (and non-maliciously) destroyed. We all put so much effort into making everything nice for the holidays; it’s generous but also kind of exhausting, and maybe not all that helpful to our collective spirits. When our house looks nice and our food is delicious but we are so tired or irritated we can’t enjoy it, something is definitely askew.

I’m not suggesting we let kittens in holiday sweaters drink our eggnog martinis and tear down our tree (though watching a tabby in a bow tie play with a Christmas ornament is everything you could hope for). But they do remind me that this season is not meant to be simply endured but, ideally, savored.