The keys to the success of ‘Derry Girls’: Northern Ireland, Catholicism and the ordinary lives of teenage girls 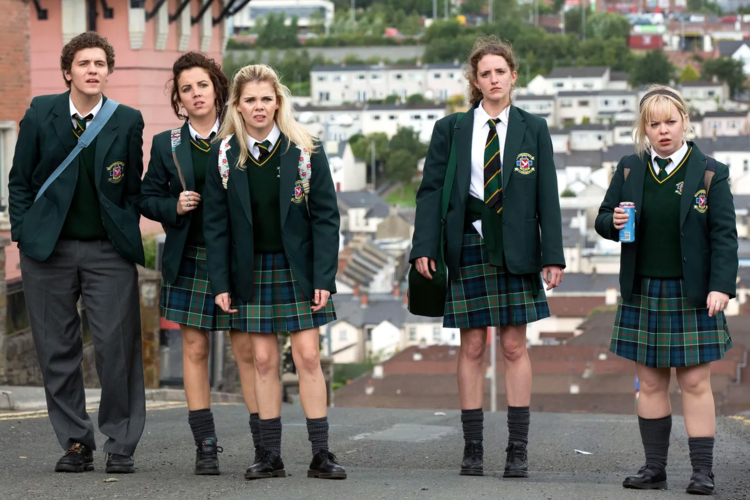 In the first episode of the last season of the Netflix series “Derry Girls,” Clare (Nicola Coughlin), one of the shows’ titular heroines, screams at her friends: “We’re girls. We’re poor. We’re from Northern Ireland and we’re Catholic, for Christ’s sake!” Clare states this to argue for their lack of prospects and hope for their futures. But Clare’s proclamation also identifies the key ingredients that have made the show great comedy and important television.

The series is a semi-autobiographical account of its creator Lisa McGee’s adolescence in the titular Northern Irish city, which is perhaps best known for the Bloody Sunday massacre of 1972, when British soldiers shot and killed 14 unarmed civilians during a protest march in the Bogside area of Derry. Though the series takes place some two decades after the events of Bloody Sunday, it is still set within the historical timeframe commonly referred to as the Troubles.

The third season of ‘Derry Girls’ has plenty of laughs to offer and goes deeper with all its main characters.

The Troubles was an approximately 30 year period of violent paramilitary conflict in Northern Ireland between the primarily Protestant Unionists, who wished to remain a part of the United Kingdom, and the Catholic Republican factions, who desired a united Irish Republic. What “Derry Girls” did so beautifully in its brief three seasons was use the Troubles as a horizon within which to tell the stories of the lives of four ordinary teenage girls: Erin (Saoirse-Monica Jackson), Michelle (Jamie-Lee O’Donnell), Clare (Nicola Coughlin), Orla (Louisa Harland) and one boy, James (Dylan Llewellyn) in the 1990s. The juxtaposition of the always heightened reality of their mundane teenage existence with the always encroaching potential for paramilitary violence makes for wonderful comedy in the adroit hands of the writer/creator McGee.

It is fitting that “Derry Girls’” final season occurs on the eve of the Good Friday Agreement of 1998, which ostensibly put an end to the Troubles. The third season of the show, while perhaps not as consistently funny and sharp as the previous two seasons, still has plenty of laughs to offer and goes deeper with all its main characters, providing a cathartic closure for fans of the series. The final season includes appearances by Northern Ireland’s “favorite son,” Liam Neeson, along with the former first U.S. daughter, Chelsea Clinton, whose cameo appearance serves, in part, as a gentle nod to her father’s role in the Northern Irish peace process.

As is always the case with excellent television, there is never enough time given to the viewer’s personal favorite character, and that is especially true in the case of “Derry Girls.” I yearned for more of Sister Michael (Siobhan McSweeney), the principal of the girls’ high school, as well as the show’s singular—and oh so dry—voice of reason. Alas, the show is not titled “Derry Nuns,” so it cannot be expected that every episode will revolve around television’s coolest religious sister, a representation that was long overdue. Still, Sister Michael is given her moment in the final episode as she faces off once more with her primary foil, the vain, ponytail-wearing, guitar-playing Father Peter (Peter Campion) before the two come to a place of concord over a glass of whiskey.

The show’s final word on the cleric, which is very gentle indeed, speaks to its overarching treatment of Catholicism.

The show’s final word on the cleric, which is very gentle indeed, speaks to its overarching treatment of Catholicism—that is, of an institution made up, like any other, of flawed individuals, some better, some worse, most of them trying to do the best they can. And it is that relatively agenda-less perspective, born, no doubt, out of McGee’s upbringing in Northern Ireland during the Troubles, that allows the series to be so much more than a teen sitcom.

As the eponymous characters of “Derry Girls” emerge out of their self-obsessed adolescent cocoons, the series itself also seems to grow in its awareness of the sociohistorical context in which it is situated. This is most evident in its final episode, which gives an account of the days leading up to the vote on the referendum approving the Good Friday Agreement, the passing of which will include not only an end to (most of) the sectarian violence in the North, but also the release of all paramilitary prisoners. The series’s protagonist, Erin (Saoirse-Monica Jackson), is ambivalent about emancipating the prisoners, leading to conflict with Michelle (Jamie-Lee O’Donnell), whose older brother, it is disclosed, is serving a sentence for paramilitary violence. When the two friends finally reconcile, Michelle’s comments to Erin articulate the messiness of the Troubles, and echoes the messiness of our contemporary situation: “You weren’t wrong. You weren’t right, either. I don’t think there’s an answer to any of this.”

The blessing and curse of most shows created in Ireland and the United Kingdom is that they are scarce, the seasons are much shorter, and they are usually not wrung for every last drop of financial gain, as American shows are. This allows us to love the characters without ever becoming tired by them. Conversely, we are forced to let go of them much more quickly than we would like, and so we bid farewell to “Derry Girls” too soon.

The show’s final episode shows the titular heroines, now 18 years old, voting for the first time. Indeed, their first act of agency as adults is choosing a very different future than the one they had been prepared for. As young women entering 21st century Ireland, they are girls no longer, on the threshold of living in a much more peaceful and liberalized world, for better or for worse.

Jake Martin, S.J., is an assistant professor of film studies and performing arts at Creighton University. His book What’s So Funny About Faith: A Memoir from the Intersection of the Hilarious and Holy was published by Loyola Press in 2012.