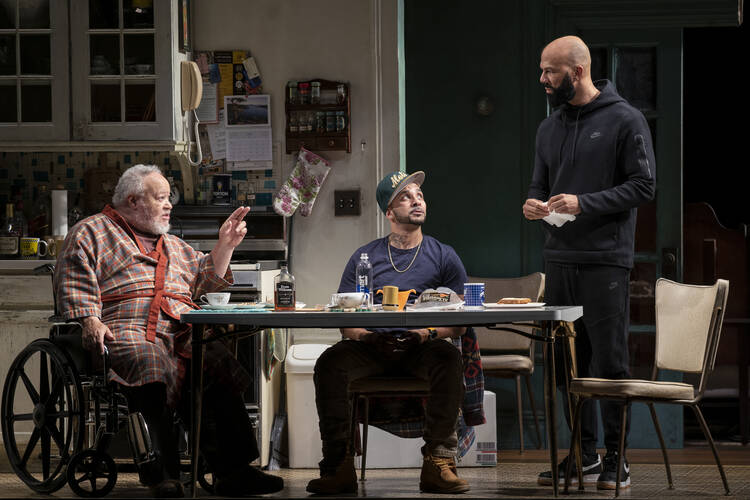 We know what it means for a story to have a moral, a tidy concluding sentence that states the supposed point of the whole thing. But what does it mean for a narrative to have a morality? In both our popular culture and our highbrow arts, in gritty antihero dramas no less than light romantic comedies, we instinctively align ourselves with certain characters and judge a story’s value by our rooting interest in certain outcomes. It’s never quite as simple as wanting the “good guys” to win—indeed, we are often quite jolted and thrilled when our expectations are overturned, even violently.

The point is that we have those expectations, and good dramatists know how to engage them, even toy with them, often to bracing ends. In “Between Riverside and Crazy,” Stephen Adly Guirgis’s vivid, juicy drama, now on Broadway, a complicated, transactional, yet ultimately transcendent morality works itself out through the character of Walter “Pops” Washington (Stephen McKinley Henderson), a retired N.Y.P.D. cop languishing in a large apartment since his wife’s death six months prior, with an adult son, Junior (Common), just out of jail but not entirely out of trouble, Junior’s flighty girlfriend Lulu (Rosal Colón), and a twitchy parolee, Oswaldo (Victor Almanzar). It soon emerges that Walter, who is Black, is pressing a civil suit against the city over his shooting by a white rookie cop some eight years earlier, while his landlord keeps threatening eviction over lease violations.

All of Guirgis’s work has been informed by restless moral seeking—of wanting to put his intuitions about what’s good and right to the test.

The vise tightens around Walter on the fateful night he has his former N.Y.P.D. partner, Detective O’Connor (Elizabeth Canavan), and her fiancé, Lieutenant Caro (Michael Rispoli), over for dinner. Guirgis pulls a masterful fakeout here, giving Lieutenant Caro a disgusted rant about “the jerk” Rudolph Giuliani, under whose vaunted mayorship they all served in the 1990s. “God bless Al Sharpton and let’s go, Mets,” he concludes with a toast. But then he and O’Connor squeeze Walter hard where it hurts: He should drop the suit and settle, they advise, or the city will back his landlord’s complaints about the quasi-halfway house Walter’s been running and kick him out on the street. It’s not about race, they insist (“No black, no white—just blue,” in Lieutenant Caro’s words), but Walter, cornered and angry, quite reasonably doesn’t see it that way.

Through the complications that ensue, often comic but never less than deadly serious, Walter clings to an ornery righteousness, even when he’s not quite in the right, and we follow him with agonized empathy around every funny, terrible turn. Written expressly for Henderson—a formidable, compulsively watchable actor best known for playing entertaining supporting characters in the plays of August Wilson, not to mention as the exasperated drama teacher and priest in the film “Lady Bird”—Walter “Pops” Washington is a steep, jagged mountain of a role, but Henderson makes the climb seem as natural as breathing. Austin Pendleton’s focused direction also makes the play feel seamless, not least by having scene transitions overlap as Walt Spangler’s set rotates through them, and the performances to a person have irresistible humanity and surprise.

As ever, Guirgis writes hilarious, profane dialogue and puts his characters in contention over matters both petty and portentous.

What is it that gives “Between Riverside and Crazy” its unique heft? As ever, Guirgis writes hilarious, profane dialogue and puts his characters in contention over matters both petty and portentous while the larger machinery of plot grinds away. This has been his playbook since his 2000 breakthrough, “Jesus Hopped the ‘A’ Train,” through his last Broadway play, 2011’s “The Mother____ With the Hat,”, and up to 2019’s “Halfway Bitches Go Straight to Heaven.” It may be that the high stakes of the themes addressed in “Between Riverside and Crazy”—race and policing, mortality and mourning, forgiveness vs. justice—have accordingly raised the bar for Guirgis’s dramaturgy.

On the other hand, it’s not like his previous plays were frothy fare; they variously addressed homelessness, abuse, addiction and capital punishment, while “The Last Days of Judas Iscariot” wrestled with the question of unforgivable sin. Indeed, all of Guirgis’s work has been informed by restless moral seeking—of wanting to put his intuitions about what’s good and right, informed if not quite dictated by Catholic teaching, to the test.

Guirgis isn’t merely an efficient entertainer; he’s an authentically populist storyteller at the top of his game.

But the dramatic trial he puts his characters through in “Between Riverside and Crazy” feels more grown-up than ever. Our sympathies may flow naturally to Henderson’s Pops, the old coot with a Santa Claus beard and belly, but Guirgis doesn’t sentimentalize his misanthropy and rage, nor does he paint the various opponents and opportunists in Pops’ life with a simple brush of villainy.

It’s also partly a matter of craft. Guirgis uses plotting—a basic storytelling tool to which he hasn’t always paid close attention—with a sharp clarity of purpose that matches Pops’ determination to claim what’s his. Some of the narrative’s dramatic turns skirt the edge of melodrama, and many of its crowd-pleasing flourishes send ripples of delight through the audience. But Guirgis isn’t merely an efficient entertainer; “Between Riverside and Crazy” proves he’s an authentically populist storyteller at the top of his game, in the rarefied company of Clifford Odets, August Wilson or Lynn Nottage.

The final image of Pops in a light-peach-colored suit and hat, resting lightly on Henderson’s Burl Ives-esque frame, put me in mind of another playwriting antecedent, Tennessee Williams. (Ives famously originated the stage role of Big Daddy in “Cat on a Hot Tin Roof” and reprised it on film.) The connection between Williams and Guirgis may seem tenuous, but both have a kind of poetic regionalism, and, more important, a tragic devotion to characters whose flaws and virtues are inseparable, whose illusions and intentions are hopelessly muddled. That’s a moral vision—of a world as fallen as it is beloved—with which I resonate strongly, and I suspect I’m not alone.