Who is allowed to write about pedophilia? 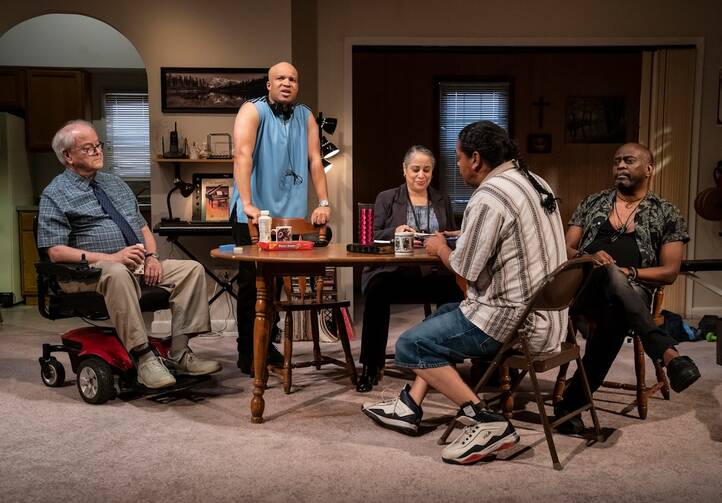 On Nov. 23, Peter Marks, the theater critic for The Washington Post, wrote a review of “Downstate,” Bruce Norris’s new off-Broadway play about a group home for pedophiles. Mr. Marks described the play, which attempts to bring as much humanity to the perpetrators of horrific abuse as to their victims, as “a stunning demonstration of the power of narrative art to tackle a taboo, to compel us to look at a controversial topic from novel perspectives.” He also warned readers, as you yourself might feel reading this, that this play is not for everyone. Though “Downstate” does not in any way condone or ignore the horrific violence these men have perpetrated, it does challenge us to consider “what magnitude of ongoing torment each one deserves.”

As soon as Mr. Marks’s article was tweeted out by The Post, under the headline, “‘Downstate’ is a play about pedophiles. It’s also brilliant,” it received tremendous backlash. Mr. Marks and The Post were both attacked as normalizing pedophilia. Fox News picked up the story, driving more outrage at them. It got so bad Mr. Marks decided to make his Twitter profile private.

Of course, none of his attackers had seen the play about pedophiles that Mr. Marks was reviewing. I suspect relatively few had read his very thoughtful review, either. So often on social media people are just reacting to the headlines (which are often not even written by the author but by the publication’s social media team).

There is an important question here, one that I have been struggling with myself since I saw the play: Who gets to write about pedophilia? And what are they allowed to say?

But even with those provisos, there is an important question here, one that I have been struggling with myself since I saw the play: Who gets to write about pedophilia? And what are they allowed to say?

“Downstate,” A Play About Pedophiles

From the time I first heard about “Downstate” from Michael O’Loughlin’s review in 2018 of the original Chicago production, it repelled me. I have spent my entire priestly life dealing with the shame and confusion of being a part of an organization that has allowed and enabled catastrophic harm to befall so many children, vulnerable adults and their families. It is impossible to overstate the violence those men have done or the damage they have caused. I do not want to humanize them. I do not want to see them be forgiven or set free.

As it turns out, I am not sure that is at all what “Downstate” is about. Mr. Marks and others have characterized the play as challenging our decision as a society to make the lives of people who commit sexual offenses against children as difficult and isolated as is humanly possible. And certainly it does spend three hours hanging out with four men who in the past have abused children and follows them through what at times is an almost sitcom-y set of roommate conflicts, problems with the neighbors and landlord issues.

From the time I first heard about “Downstate” from Michael O’Loughlin’s review in 2018 of the original Chicago production, it repelled me.

But from the beginning, the men in the home also display a charm that is never not unsettling. In a normal world you would call them friendly, but in this context almost everything they do reads as manipulative and potentially dangerous. To a large extent, the question driving our attention over the course of the play is whether any of these men will ever drop their facades and reveal the truth of who they actually are. At the very beginning of “Downstate,” we watch Andy, a victim, trying to bring about precisely that kind of catharsis with Fred, the kindly old music teacher who raped him and a friend. Andy keeps coming back to their home over the course of the play, trying to get to a moment of actual truth with Fred. He never gets there.

Neither do we, not really. At the end of the play, having been through a cascading series of harrowing situations, Fred and his best friend, Dee, sit alone at a table in silence. Something approaching the truth seems to play across their faces. (The performances by Francis Guinan and K. Todd Freeman are breathtakingly complex.) In the play’s one truly authentic moment, Dee breaks down crying. And you think, this is it. Finally, a glimpse of the real.

But what Dee says he is grieving is not his crimes and their cost but the anger that consumes him over the state of his life. And, with the gentleness of a good confessor, Fred tells him that he’s forgiven.

The idea that a pedophile is being presented onstage as an agent of mercy is appalling. What is equally disturbing, though, is the question the moment raises: Is there anyone but another pedophile who could possibly understand this man’s sins enough to offer real forgiveness?

Is there anyone but another pedophile who could possibly understand this man’s sins enough to offer real forgiveness?

Lest we think that the playwright has landed on “their side,” the show ends with Fred putting on an old record that reminds him of Andy. Is this his way of expressing his regret over everything he did to Andy, everything he took from him as a child? Or is it an expression of his continued desire for him? Or maybe it is both. Who can say?

Truly, what makes “Downstate” profound is that it gives us no place to land, no resolution to shelter in and, to my mind, no sense of where the author stands on any of these characters or their situation. When we say that a writer has humanized a character, generally that is understood to be a good thing, an attempt to overcome the simplifications and unexamined prejudices we bring to them. But Mr. Norris’s work here is more about revealing the impenetrable ambiguity of our interior lives. No matter how many layers you peel away, we never fully understand another person. They only become stranger and more contradictory.

So we are left with Andy, wanting understanding that is not to be found, yearning for resolution that these men will never give and hungering for justice that no punishment can ever yield. As his record played on and on at the end, Fred gazing into the distance, I was so horrified and uncomfortable I unconsciously covered my eyes.

The fact that theater critics are being threatened for reviewing a play is ridiculous and appalling. Mr. Marks is an insightful reviewer (and a beautiful writer, too). And in praising “Downstate,” he is certainly not normalizing pedophiles.

To see a great performance is to get a glimpse of something holy. And shockingly, it turns out that can true even if the character being depicted is a monster.

But is it appropriate for him or me to admire the writing in a story about pedophiles? Is it O.K. for me to describe Guinan and Freeman’s performances as “breathtaking”? Is there a way of praising someone’s performance as a pedophile, or the writing and direction of a play about pedophiles, that doesn’t by its nature forget or ignore the millions of children and vulnerable adults such people have assaulted and destroyed in real life?

Or worse, in celebrating a performance are we, along with Mr. Norris and director Pam McKinnon, making monsters seem more likable or interesting? Truly, what is to be gained from trying to paint a more complex portrait of pedophiles’ life experience or by attending to such a portrait? Why would we give these predators our attention when they have destroyed children’s lives?

I’m not sure I have answers to any of these questions. I will say that more than anything at this point I would like to hear from victims of child abuse who have seen “Downstate.” In any conversation about pedophilia, their voices should be privileged and prioritized, and as far as I can tell they haven’t been. I have yet to see one review or commentary of this play written by an abuse victim.

But I also wonder whether the reaction to Mr. Marks doesn’t raise further questions about what reviews are for and why we write them. Personally, I don’t think we reviewers are here just to provide information, to tell readers what we think was good or bad. Rather, we are Jacob wrestling the angel in the dark, trying to put words to the transcendent that we have witnessed. We hope that doing so will also somehow offer readers a profound experience of their own, whether that means a vision of the hilarious absurdity of our lives or a confrontation with the darkness.

I write about “Downstate” to try and understand what happened to me watching it. I write about it as well to celebrate a script and acting of such high quality that they felt somehow revelatory. To see a great performance is to get a glimpse of something holy. And shockingly, it turns out that can be true even if the character being depicted is a monster.