Who is this Good King Wenceslas—and why does he deserve a Christmas carol? 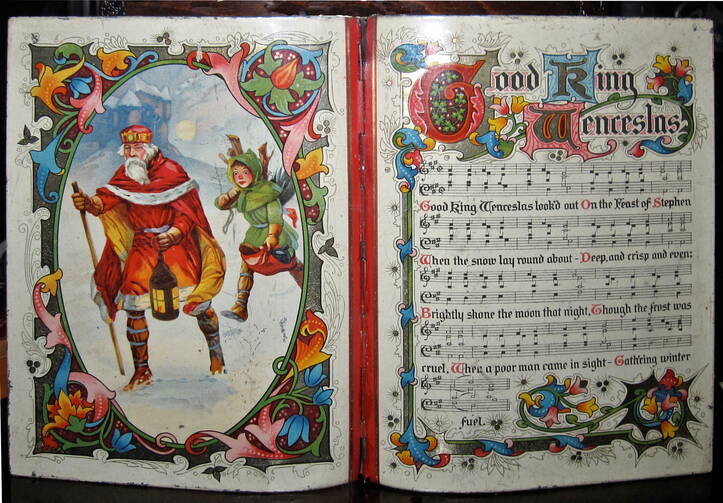 Sheet music of "Good King Wenceslas" in a biscuit container from 1913, preserved at the Victoria and Albert Museum. (Wikimedia)

If you’ve listened to this week’s episode of “Hark!” on “Good King Wenceslas,” you’ve heard me talk about the only mental association I have with the song. It’s that scene near the climax of “Love Actually” where Prime Minister Hugh Grant goes house to house on Christmas Eve trying to find the home of his former assistant Natalie. He comes to a house where three little girls beg him to sing them a carol, until he finally gives in and he starts singing. And what he and his security officer sing, while the girls hop around dancing, is “Good King Wenceslas.”

It is one of my favorite scenes in the film, but it has absolutely nothing to do with the feast of Christ’s birth. From what I can tell, neither does the song. Who is this King Wenceslas fella? What makes him good? And why does he merit a song at Christmas?

As usual, the facts that producers Maggi Van Dorn and Ricardo da Silva, S.J., uncover about the song reveal that the situation is far odder than you might think. It turns out Wenceslas was a 10th-century Christian duke of Bohemia—the modern-day Czech Republic. He was never a king. And while some legends say he was assassinated as a result of his faith—by his brother at the behest of his mom, no less (and you think you have family drama)—there is plenty of reason to think it was just a straight-up power grab.

And weirdest of all, 900 years later—four times as long as the entire history of the United States—some English composer thought, “You know what, there should be a Christmas song about that guy.”

Who is this King Wenceslas fella? What makes him good? And why does he merit a song at Christmas?

I won’t spoil the joy of discovering with Maggi and Ricardo how any of these things make sense. But listening to the song now, I’m struck by how it functions as a sort of inverted image of another 19th-century classic, Charles Dickens’s “A Christmas Carol.” Rather than hoarding his gold like Scrooge, Wenceslas goes out of his way to help those who are going without, braving what seems like a pretty nasty snowstorm to do so. And instead of having to be pushed to change, the king turns out to be an example for others—in this case his poor page.

I’m particularly touched by that last section, in which Wenceslas encourages the page, whose confidence before the nighttime storm is flagging. “Mark my footsteps,” the king tells the page, “tread thou in them boldly. Thou shall find the winter’s rage/ Freeze thy blood less coldly.”

In this season when the wind grows chill and the northern climate grows wet and icy, it is hard not to pull your coat tight and hurry home, no matter the needs of the people you meet along the way. Wenceslas’s words are a powerful reminder to me that if you keep your heart open and try to do good, even when you’d rather just race home, you’ll find refuge not only for others but for yourself.

For much more great stuff about Good King Wenceslas, check out the new episode of Hark!, the America Media podcast where we break open the Christmas carols we know and love.

Listen to previous episodes of  “Hark!”