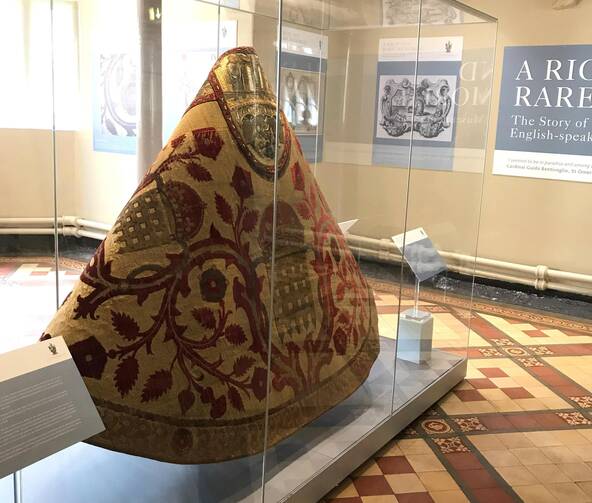 A piece of Jesuit history from the Protestant Reformation is now on display at the Metropolitan Museum of Art in New York City: The Henry VII cope has been flown from its home at the British Jesuit Province, care of Stonyhurst College, to the Met for its exhibition “The Tudors: Art and Majesty in Renaissance England.”

But what on earth is a cope? Like a chasuble, a cope is an outer garment with ornate detailing worn by priests or bishops, today usually only worn in procession, not while celebrating the Mass. The Henry VII cope was made at the commission of the king himself—the father of the infamous Henry VIII—and the one at the Met is the only remaining from the original 29 that were made.

Like a chasuble, a cope is an outer garment with ornate detailing worn by priests or bishops, today usually only worn in procession.

Dr. Jan Graffius, the curator of the museum collections at Stonyhurst College, a Jesuit school in England, explained the history of the cope in an interview with America. The copes, she said, were made around 1495 in Florence and Lucca, in modern-day Italy, and the cost was “astronomical.” Made on special 14-foot-wide looms, the copes were woven in one piece and are estimated to have cost between five and 10 million pounds in current money.

The 29 copes were made to be worn at Westminster Abbey by the bishops of England and Wales for the coronation of Henry VII’s eldest son, Arthur, though he died before he could take the throne. The cope that is present now at the Met was most likely used at the coronation of Arthur’s younger brother, Henry VIII, in 1509. It was also “certainly” taken to France with Henry VIII in 1520 to the Field of the Cloth of Gold, when he met with the king of France in a show of magnificence and pageantry, Dr. Graffius said. At this meeting, one of the copes was surely worn by Cardinal Thomas Wolsey, the top cleric in England at the time.

During the Reformation, Catholic vestments were targeted for destruction. At the end of the 16th century, only one of these Henry VII copes was left: the one on display today. Some were cut up, others destroyed by the hands of time, still more simply vanished. By 1609, Dr. Graffius said, the last remaining cope was at Stonyhurst College, where it was used in a procession by a visiting cardinal, and he wrote that this was “an act of memory.” Although it was over 100 years old and obviously very valuable, the cope was still in use and viewable to the average student at the school.

The school, founded in 1593, was English, but was located across the English Channel in France because Catholic schools were not legal on English soil at the time. Families would send their children over with aliases and carrying valuable Catholic objects, such as medieval books of hours, vestments and relics. As a memento of a time when Catholicism was the state religion of England, the cope was important for historical and religious education for the students, Dr. Graffius said. “It was made for a king, and because that king came from a time when England was still a Catholic country, it had real symbolism,” she remarked.

The cope that is present now at the Met was most likely used at the coronation of Arthur’s younger brother, Henry VIII, in 1509.

The cope was not the only Catholic artifact that still survives today, and still other objects owned by the British Jesuits, Stonyhurst College and Oxford’s Campion Hall will be on display in the United States starting Nov. 9 at St. Ignatius of Loyola Church on Park Avenue in New York City. While details have not yet been confirmed for other dates and locations, Dr. Graffius will be traveling to the United States with these artifacts.

In the smaller exhibit, more portable artifacts with strong Jesuit connections will be shown, including prayer books and small crucifixes dating to the Tudor period, according to John McManus, communications director for the British Jesuit Province, in a press release sent to America. Among these are the Book of Hours belonging to Elizabeth Plantagenet, the niece of Richard III, which has a red binding that is worn from daily use, and is signed by Elizabeth herself. Under her name is inscribed her new title, “the quene,” after she married Henry VII. Another illuminated Book of Hours (the name for a devotional popular in the medieval period, meant for praying the canonical hours) belonged to one of Elizabeth Plantagenet’s ladies in waiting.

A crucifix belonging to the English martyr St. Thomas More and his wife, Lady Alice, which according to its inscription had a tooth of St. Thomas the Apostle inside, will also be present. The crucifix is depicted in a 1532 painting by Hans Holbein the Younger of Lady Alice. According to the press release, another item on display, Thomas More’s small gold-and-enamel crucifix, was meant to be worn under the clothing and as an act of mortification. Its sharp spines on the arms of the cross were designed to cause pain and even draw blood. This crucifix, in addition to the hair shirt he wore, would remind him of the pain and suffering of Jesus on the cross.

Thomas More’s small gold-and-enamel crucifix was meant to be worn under the clothing and as an act of mortification.

A small Agnus Dei wax disc, made in 1578, depicts the Lamb of God with the text of the prayer surrounding it. It is also marked with the number “7,” for the seventh year of Gregory XIII’s pontificate. It belonged to the Jesuit priest St. Edmund Campion, the namesake of Campion Hall, among others, and was only discovered in 1959 in the rafters of the house where Campion was betrayed and captured, according to Nick Austin, S.J., the headmaster of Campion Hall, the Jesuit college at Oxford University.

“This is one of the few things we know he probably owned and it has a special significance because it was brought over from Rome and it had been blessed by Gregory XIII,” Father Austin said. “It was with Campion to give solace to Catholics in a persecuted time.”

Dr. Graffius hopes that the “Lyricorum Libri IV” by Matthias Casimir, S.J., a book of poetry found often in Jesuit colleges of the 17th and 18th centuries, will be of interest to American audiences. Two of the owners of the book—one of them later a signer of the U.S. Constitution—left graffiti in the book: Tobacco pipes stick out from the mouths of Apollo and Erato, and the boys defaced the arms of Pope Urban VIII, “indicating a less-than-reverent attitude” from either John or Charles Carroll. Students in the 18th century could be equally as bored in class or irreverent to authority as kids today, and seeing that can humanize them.

Correction 11/4/22: This article has been updated with the dates for the exhibition in New York, Cleveland and San Francisco.