Review: Cate Blanchett is the pope of the classical music world in ‘Tár’ 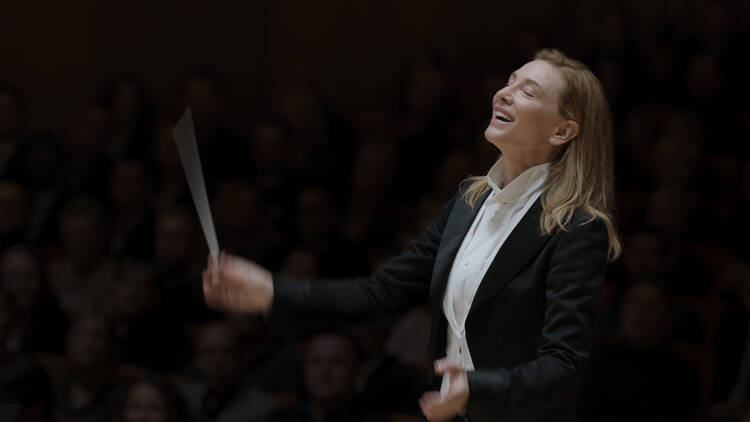 The world of classical music is like a cathedral of art in “Tár,” which would make Cate Blanchett the pope, enthroned and seemingly beyond reproach. Her character, Lydia Tár, is a household name, a protégé of Leonard Bernstein, the keeper of the keys to the secrets embedded in Mahler and Bach, an American, a woman and the person now in charge of the Berlin Philharmonic—a gig that may prompt reality-inclined classical music fans to regard director Todd Field’s emotional epic as science fiction.

Regardless of employment opportunities in German music, however, Lydia (may we call her Lydia?) is a cultural phenomenon, and “Tár” is about power, guilt and the always tantalizing question of whether the art can or should absolve the artist for being who she is.

“Tár” is about power, guilt and the always tantalizing question of whether the art can or should absolve the artist for being who she is.

It also asks whether we can warm to a character of venomous inclinations, which brings us to Ms. Blanchett. She occupies our attention and thoughts in a way that was once strictly the domain of Meryl Streep: an actress who simultaneously transcends roles and roots them in nature. She is an object of fascination to the point that the character becomes almost secondary. As is the question in great music, she makes us ask: Does the essence of the work exist at all on the page? Or only in the performance? Is it literary or experiential? Blanchett makes the argument for the latter. Like prayer, her acting possesses a near-divine evanescence.

An old joke among entertainment journalists began with the question “Why do you want to interview the director and not the actor?” the response being, “You want to talk to the conductor? Or the violin?” It is disrespectful, of course, as most journalism gags are. But it makes no sense at all regarding “Tár,” which is nothing against Mr. Field.

If there’s a common thread in the Field oeuvre, it is characters who shouldn’t be sympathetic but are.

Field has returned to directing after two first-rate films (“In the Bedroom” of 2001 and “Little Children” of 2006) and a long period of not getting projects off the ground. If there’s a common thread in his oeuvre, it is characters who shouldn’t be sympathetic but are.

Lydia, for instance, is a “U-Haul lesbian” who wields her influence like a barbed baton and lives life in a fashion that could be called furious, save for the control she exercises in the most unhinged of emotional spaces: When her daughter, Petra, (Mila Bogojevic) is bullied on the school playground, Lydia hissing “I’ll get you” to the bully, sotto voce, is not the explosion of a parent pushed to the edge. It’s far simpler: a warning that she might really get you.

Lydia lives with her concertmaster, Sharon (the great German actress Nina Hoss), with whom she shares the softness she spares others—Sebastian (Allan Corduner), for instance, her assistant conductor, whom Lydia treats the way Richard Strauss treated the timpani. She exists at the very highest level of the musical world, with the basest of accusations nipping at her professional heels: that she might have wooed and lost, or used and abused, young women with career goals similar to her own and who have seen their futures come unstrung. Social media, inevitably, perhaps unfairly (though I’m not actually saying which), strips away the artifice and becomes the public conscience one can’t suppress. Or ignore. Or escape.

The plotline, the intrigues and the emotional crimes snake through “Tár” the way that lone oboe snakes its way through the second movement of Beethoven’s Ninth. With purpose. And inevitability. And a performance that can’t be called revelatory because we have come to expect so much from Ms. Blanchett.