Jesuits pledged $100 million in reparations for sale of enslaved persons. Descendants say progress has been too slow. 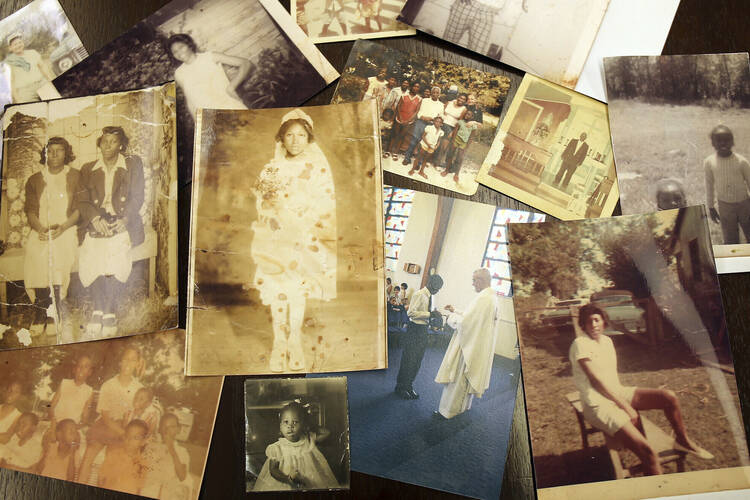 FILE - This April 24, 2019 photo shows photographs of descendants of enslaved people who were sold by Georgetown University and the Maryland Jesuits to southern Louisiana in 1838. (Claire Vail/American Ancestors/New England Historic Genealogical Society via AP)

The Society of Jesus and the GU272 Descendants Association formed a partnership last year to help heal the deep racial wounds that persist in the United States.

The Descendants Truth and Reconciliation Foundation was formed in March 2021 to address both a specific historical injustice and more broadly to offer a model for how to accelerate racial healing and advance racial justice in the United States. The Jesuits pledged to raise $100 million to support the work of the foundation when the initiative was announced last year.

Yet, according to Joseph M. Stewart, the president of the foundation, progress has been far too slow. “We felt we could come to our church on a moral basis and ask them to stand up and practice fully what they preach daily. And we were not seeing it,” he said in an interview with America.

In addition to being the foundation president, Mr. Stewart is a descendent of Isaac Hawkings, one the 272 enslaved persons sold by Georgetown University in 1838. “We have not stepped back one step from our vision,” he told America. “We will continue to pursue it as long as we have the Jesuits at the table. We are going to insist and challenge them that reconciliation has been long overdue for the sins of the church.”

Mr. Stewart wrote a public letter to Arturo Sosa, S.J., the superior general of the Society of Jesus, outlining his concerns as well as a path forward. He described various levels of engagement during dialogues with provincials. For example, he described a handful of Jesuits who have taken to heart “the pain, suffering and lack of human dignity in the lives of our ancestors.”

“They seem determined to restore human dignity, justice and equality to the Descendants of Jesuit enslavement, and moral dignity to the Society of Jesus and Catholicism,” he wrote.

But the project has also encountered “hardliners,” he said. These Jesuits say “they weren’t here during Jesuit enslavement, never enslaved anyone and thus do not ‘owe’ anyone anything.” Other Jesuits, which Mr. Stewart described as “in the middle,” “seem to prefer doing God’s work without such distractions as the earthly needs of Descendants.”

The Jesuits pledged to raise $100 million to support the work of the foundation when the initiative was announced last year.

This has led to the foundation’s current state of disillusionment, he said, which is why he is requesting Father Sosa to intercede. Mr. Stewart said the limited fundraising thus far—$15 million of the promised $100 million pledged has been raised—epitomizes the lack of progress.

“We’ve been meeting for hours every week for two years now, and we still just have $15 million,” he told America. “That’s not a judgment of the men’s commitment. It’s a judgment on the results.”

While the Jesuits pledged to raise $100 million for the effort in the next five years, the trust has a long-term goal of raising $1 billion. Along with long-term racial healing and racial justice, the foundation intends to support the education of descendants for future generations and provide direct relief to the impoverished, the infirm and elderly.

“Our commitment to reconciling for the sin of slave holding is all still there. None of that has changed.”

Timothy Kesicki, S.J., the chair of the Descendants Truth and Reconciliation Trust, said the Jesuits are still on track to raise the pledged $100 million within three to five years of the initial announcement last year.

“Our commitment to reconciling for the sin of slave holding is all still there. None of that has changed,” he said in an interview with America. “The work of truth, racial healing and transformation is ongoing. And that’s going to outlive my life.”

Still, while it will take time, Father Kesicki had hoped to be further along in fundraising at this point. “We have been given an opportunity, a vision. We have to rise to the occasion,” he said. “Where you put your money says what you are committed to…. That’s why capitalization is essential if we really want to operationalize this vision.”

Despite the slow progress in fundraising, Father Kesicki stressed that the Jesuits are committed to the process. “Living inside of me, living inside of Joe Stewart, living inside those of us directly involved in this, is a commitment, a vocation, a calling and a determination to address this history in a way that God would say was just,” he said.

“We remain committed to our shared vision for the Trust and to our promise of a substantial fundraising effort to fulfill our pledge to begin capitalizing the Trust,” they said in a statement. “We also remain deeply devoted to our historic partnership with the Descendant community, and to working together for racial reconciliation and healing in this country.”

“How long before the church, the House of God, the Body of Christ, how long before it stands up and lets go of the hypocrisy about its respect for all of God’s children?”

At the time of the sale in 1838, the Maryland Jesuits had been owners of enslaved people for more than 100 years. The Jesuits acquired enslaved individuals as gifts and through purchase. When enslaved women had children, those children were counted as enslaved, according to historians. The Jesuits were the biggest plantation owners in Maryland at the time and grew tobacco, the cash crop of the region. Enslaved persons owned by the Jesuits also worked in carpentry, as cooks and as artisans.

Owning enslaved persons became less profitable for the Jesuits in the 19th century. The Jesuit leaders at the time could not decide whether to hold on to the enslaved persons, sell them or free them. Finally, in the 1830s, with Georgetown’s debt rising, the Jesuits went forward with the sale of the enslaved people to plantations in the Deep South. Their journey by ship to Louisiana took three weeks.

Mr. Stewart has been a Catholic all of his life. When he was a child, he had to sit on the “Black side” of his church. “Was it God that put me there?” he said. “Or was it the Catholic leadership in the United States, who had already gone so far as to be perpetuators of slavery in this country?”

The time to address these sins—as a nation and as a church—is long overdue, Mr. Stewart said, noting that “it wasn’t the Jesuits alone and not the Catholic Church that benefited from slavery.”

“How long before the church, the House of God, the Body of Christ, how long before it stands up and lets go of the hypocrisy about its respect for all of God’s children,” he said. “We can do this as partners, not as enemies. We call upon [Father Sosa] to put all the sin and hypocrisy behind us, and to be able to look at each other with love and respect…to seek God in all things.”