Review: Netflix’s ‘The Sandman’ invites us into gratitude, wonder and the depths of our dreams 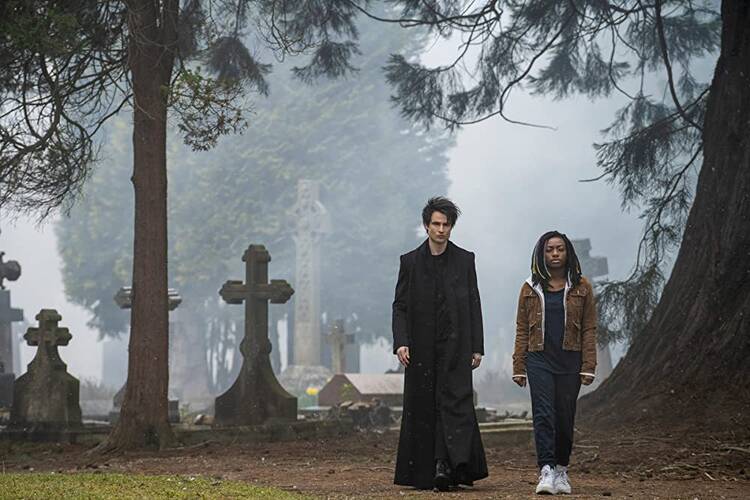 Say what you will about the quality of this film or that television show, we live in an age of wonders. Stories so exquisitely imagined on paper that it once seemed ridiculous to even consider trying to capture them on film are regularly adapted at this point, and often well. (Fingers crossed, “Lord of the Rings.”) At this point is there any story that is truly impossible to produce?

Until recently, “The Sandman”—Neil Gaiman’s magnum opus about Dream, a.k.a. the Sandman, the eternal being who oversees the universe of dreaming that we go to when we sleep—has remained that impossible quest. A recent audible series starring James McAvoy has been well received; but for decades, film and television adaptations have repeatedly failed to yield a satisfying script.

And in some ways maybe that’s been for the better, because the graphic novel series is a unique and beautiful read, an exquisite series of stories inspired equally by O. Henry, Edgar Allan Poe and Flannery O’Connor, about sin and hope, horror and humanity.

Until recently, “The Sandman”—Neil Gaiman’s magnum opus about the eternal being who oversees the universe of dreaming—has remained an impossible quest.

But after all these decades when “The Sandman” has been locked away, last week Netflix released its first season, which adapts the first two graphic novels. And it is in many ways perfectly realized. The world and its characters utterly capture Gaiman’s giddy cocktail of drama, flair and silliness. “Sandman” has a wild, expansive universe; in any given episode you might find yourself meeting the Devil, or a guy with a pumpkin for a head (his name is Merv and he is wonderful), or Death herself. Part of the joy of the series is just allowing it to sprawl and anticipating how we will get to engage with all these wonderful settings and characters in future seasons.

The cast is also filled with actors who get you excited as soon as they appear on screen. Gwendolyn Christie as Lucifer Morningstar, ruler of Hell, is utterly magnetic. Jenna Coleman, as the magical troubleshooter/troublemaker Johanna Constantine, sparkles with delight. Every scene in which David Thewlis appears as a man with a plan to use Dream’s power to change the world thrums with anxiety.

The series is broken into two parts. In the first five episodes, Dream (played by Tom Sturridge with a quietly precise expressiveness) escapes from a prison in which he has been trapped for over 100 years, returns to the dreamscape (known as The Dreaming) to find it in ruins and goes in pursuit of tools stolen from him that he needs in order to bring things back into balance. These episodes are very much universe-builders, introducing us to Dream and other wonderful characters like Cain and Abel, who live in the Dreaming with their pet baby gargoyle Irving; Matthew, a funny talking raven voiced by Patton Oswalt; or the Corinthian, an escaped nightmare with teeth for eyes—yes, you read that right; enjoy going to sleep tonight—who wanders the earth killing people and feeding their eyes into his. We revel in each new character and idea. The scene in which Lucifer and Dream battle is breathtaking in its strangeness and creativity.

What might we learn about ourselves as seen through the eyes of this quiet god who spends eternity watching us dream?

But there is a strange stasis in those early episodes, too, a sense that Dream’s story hasn’t really started yet. Thankfully, in Episode 6 we get an interlude in which Dream spends a day with his sister, Death, walking with her as she lovingly helps people through the experience of dying. It is one of the most lovely and comforting visions of death I have ever seen portrayed in media. Kirby Howell-Baptiste is so perfect as Death, I really would like her to be there when I go. The episode also introduces Robert Gatling, a man whom Death agreed to spare from dying until he wants to die, whom Dream visits once every 100 years. And the two stories both help flesh out Dream and his own desires and struggles. While the world around him is filled with wonders and nightmares, he himself is unsure who he is and how he should proceed. The two tales provide perfect examples of the powerful meditation on being human that “The Sandman” has to offer.

The last four episodes follow Dream on another quest; but this time, perhaps as a result of the meetings with both Death and Life, the show becomes more playful. One of the storylines involves a convention of serial killers; another involves a dream missing from the Dreaming that actually turns out to be a sentient field. The series also becomes more personal, with a bright young woman named Rose at the center of the story, who is desperately trying to find her little brother, while Dream wrestles with the impact of Rose’s strange unconscious capacity to enter and alter the Dreaming itself. Suddenly there are very real stakes, and Dream’s cool/sad goth god exterior is challenged in ways that make him both more lovable and a lot more disturbing.

Permeating those last four episodes is a quiet admiration for the characters’ courage and also their weirdness. John Cameron Mitchell leads a cast of eccentrics who live in a Florida hotel, whose dreams we get to peer into. In some ways they are quite pedestrian. One person feels trapped in a loop; another dreams of the person they want to be; there’s a dude who dreams of having sex with hot ladies. But the end result is mostly a deeper curiosity about them and affection for them.

A danger with fantasy shows is that they can lose themselves in the spectacle, in the look-what-we-pulled-off, and not offer much in the way of soul. Ironically this is sometimes even more true when a story deals with supernatural or religious-themed material. A show can get so excited to roll out its take on the Devil or God that it forgets that the story still needs to mean something. It has to have some kind of purchase on our humanity that we can walk away thinking about.

The story of the landscape of our dreams and its keepers is rife with potential. What might we learn about ourselves as seen through the eyes of this quiet god who spends eternity watching us dream? The first season of “The Sandman” is filled with promise. I hope in this unsteady era for streaming it will be allowed to offer much, much more.

Correction: An earlier version of this story’s photo caption incorrectly identified the actress as Kirby Howell-Baptiste playing Death. The actress in the photo is Vanesu Samunyai, who plays Rose Walker.