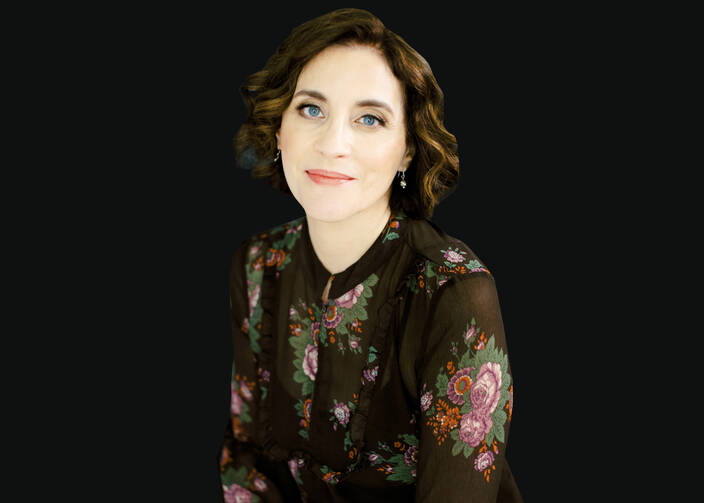 As part of its annual four-day celebration of Catholic education, liturgy and spirituality, the Los Angeles Religious Education Congress commissions a song to be used for its liturgies. This year the selection team chose composer Sarah Hart, who has been working as a Catholic lyricist, musician, retreat director, writer and composer for 30 years.

“I graduated college and moved to Nashville, like, literally the day after I graduated,” Ms. Hart remembers. “This was the place for Christian music. I moved down here with no job, no money and no place to live.”

As we talked on Zoom, she shook her head at the memory.

“In the Living Waters” speaks directly to anyone who finds themselves suffering, ashamed or alone, and it describes a God waiting to welcome them.

“But I guess when you’re called to a place, sometimes you just have to step out in bravery and do it, you know?” she continues.

In many ways, the song Ms. Hart wrote echoes that sense of “stepping out in bravery.”

“In the Living Waters” speaks directly to anyone who finds themselves suffering, ashamed or alone, and it describes a God waiting to welcome them: “The past is dead and what lies is a river clear and clean,/ where the savior stands with his open hands and he waits for you and me.” While its lyrics are clearly religious, its sound is very contemporary and poppy. It plays like a song you could hear on the radio. “The label ‘Christian music’ kind of bothers me,” Ms. Hart tells me. “As a listener I can listen to a worship song and then I can listen to Jackson Browne and feel like there’s something equally Christian about it.”

For inspiration Ms. Hart looked to her roots. “I grew up in southeastern Ohio in what I like to call my little Catholic hippy commune,” she explains. Everyone “played banjos and guitars and spoons and autoharps.” The times in the church were exciting, she recalls: “It was the 1970s. Everything was new and the church was breathable and open and lovely. There was a freedom in it. I associate instruments like the banjo and the guitar with that faith experience.”

“I grew up in southeastern Ohio in what I like to call my little Catholic hippy commune.” Everyone “played banjos and guitars and spoons and autoharps.”

I wondered if Hart saw her choice of instruments as an invitation to the congregation into that sense of freedom and liberation she knew as a child. “What makes other people feel free is completely different from me,” she notes. “But I would argue that we’re all constantly trying to get back to our best memories of the faith, [the times] when we felt the most comfortable, the most loved, the most happy and content in our faith.” And she hopes her music can help: “My hope is that people will feel something new about God or understand how loved they are, how worthy they are.”

Listening to “In the Living Waters,” I am struck by its sense of hopefulness. Any Catholic can talk about how God forgives our sins, loves us, welcomes us. But this song very much has the sense of someone who understood what it feels like to be both lost and then received. I ask Ms. Hart about this.

“I’ve been that person who has just not been able to let the past go and carried that anvil on my shoulders,” she admits. “I have been that sister who didn’t realize there was a feast waiting and had a friend say hey, ‘Come to church with me, there’s free donuts.’”

One’s personal experience is essential to Christian songwriting, Ms. Hart explains. “It’s really hard to write about something that you don’t know about.” When she is teaching young composers, one of the things she tells them is that they need to develop their spiritual lives. “Whether that’s scripture reading, prayer, quietude.... If you’re writing for the church, it’s only going to be as good as your relationship with God, I think.”

One’s personal experience is essential to Christian songwriting, Ms. Hart explains. “It’s really hard to write about something that you don’t know about.”

It can be difficult to write for the church, she notes. “Maybe not everyone will feel this way, but I think a lot of times church writers are writing to please the church or to please the hierarchy rather than to be honest about who Jesus is and was and will be, even honest about their own self.”

But in her experience this rarely serves the writer. “If it’s not really how you feel, it’s not going to translate,” she says. It won’t help the community, either: “The church needs more honesty,” Ms. Hart says. “I get so worn out on people not bearing the truth to one another. All the time, Christ is like ‘Here’s the truth, everybody!’ It’s so important to do that in our music as well.”

This hunger for transparency comes through in the composers Hart admires. “I think certain artists are so effective because they are not afraid to speak their truth,” she says, “whatever that truth looks like.” She rattles off favorites like Leonard Cohen, Gordon Lightfoot, Joni Mitchell and Jackson Browne. “Most of my really huge influences are from secular music,” she admits. “And they are great lyric writers. I’m all about ‘Tell me something.’ Really, just sing me a poem.”

“The church needs more honesty,” Ms. Hart says. “I get so worn out on people not bearing the truth to one another.”

John Flaherty, a composer who serves as chairman for the liturgy committee and director of music at the Religious Education Congress, said one of the things that thrilled him about Hart’s piece was its accessibility. “The theme songs are always great,” he explains. “I love playing and directing every single one of them. But sometimes they’re impossible for a parish to pull off.”

Hart’s song, which she wrote in just a week, was clearly something that people coming to the congress could take back to their own communities and make their own. “It can be played with a simple piano, a guitar, or a small ensemble,” Mr. Flaherty explains. “And it’s very singable.”

Flaherty appreciated the style, as well. “I love it: It’s like this Appalachian- Irish-Scotch-Tennessee-Kentucky kind of a sound. We’ve never had that kind of song as a theme song,” he says. “But that’s a segment of the church, isn’t it?” When the percussionists at the religious education congress weren’t sure how to play the washboard, Mr. Flaherty actually went to the hotel lobby, grabbed a couple of spoons and taught them how to play.

Looking at her journey as a composer, Sarah Hart has lots of great stories. There is the time she told her high school band director she wanted to be a pediatrician, and he laughed in her face. “Sarah, you’re so dumb,” she recalls him telling her. “You’re not going to be a pediatrician, you’re going to be a musician.” Or there is the moment as a child she first got to see the work of Vincent van Gogh in real life. “I turned a corner and right there in front of me was ‘Irises,’” she remembers. “And I was stopped. I started to sob. All I could think was, ‘I’m looking at God.’”

Ms. Hart notes that she has no idea what Van Gogh’s own faith experience was, or if he had any faith. She has also found herself in the position of composing for secular film and TV and having people wonder why a person of faith would do that. But she rejects that impulse toward working in silos.

“If you have faith in something bigger than yourself, then whatever you do in your life, that’s going to leak into all of it,” she says. “It’s not like, ‘Well, we take our faith to church on Sunday and then we go to Cracker Barrel.’ It doesn’t work that way. We live it, we breathe it, and it pours into everything.”

“I’m just a person who believes that God has given me something to say,” she says. “And I think it’s important we don’t build walls around ourselves. That’s not what Jesus did. So I don’t want to do it either.”

Listen to “In the Living Waters” here: