The new ‘Star Trek’ has moments better than my best homilies 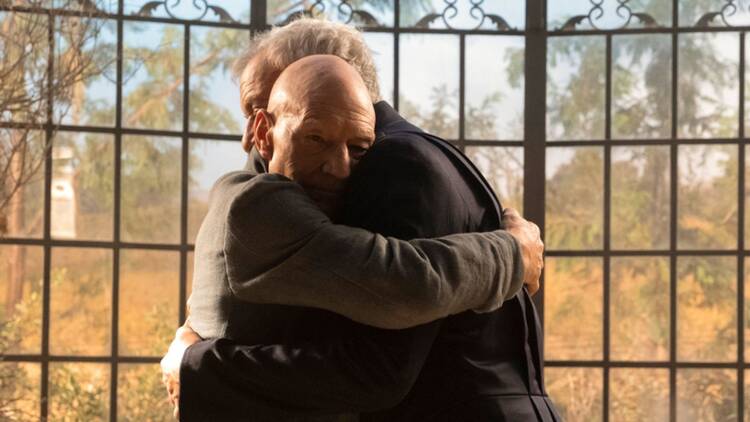 Jean-Luc Picard and Q in the second season finale of 'Picard’ (photo: Viacom/CBS)

In the very first days of the internet, “social media” was a very small group of very smart people who owned this thing that no one really knew about yet called a “modem,” writing back and forth to each other on online message boards. They wrote about how to solve the Rubik’s Cube, new Dungeons & Dragons modules, Area 51 conspiracy theories and theoretical physics. It might sound like a kinder, gentler time in retrospect, and in many ways the early internet was a place of refuge for people who didn’t fit in or were mistreated by the external world.

But even among those people and in that very basic context, the kind of cruelty we see online today was possible. One of the internet’s original sins, if not its first, was its treatment of the teen actor Wil Wheaton, a.k.a. Wesley Crusher.

If you’re of a certain age or like science fiction, you know of Wesley Crusher. He was the genius-level teenager on the 1980s “Star Trek: The Next Generation” reboot, a rather obvious attempt by the franchise to appeal to its own next generation. This “Star Trek” was so cool, it even had room for kids like us! You may also know of Wheaton because of his gorgeous performance at age 14 as Gordie in Rob Reiner’s 1986 coming-of-age film “Stand by Me.” The show couldn’t have cast a more talented and authentic kid.

While “Star Trek” has presented itself as a show about exploring strange new worlds, at its heart it has always been about elevating those who society has ignored.

But Wesley was a complete disaster. While his character was apparently modeled on the young Gene Roddenberry, the beloved creator of “Star Trek,” the writers leaned into all the things that would make him the least likable and most problematic for audiences—the fact that he didn’t fit in, have friends or act like a normal kid; his desperate insecurity; and worst of all, the fact that he was so much smarter than everyone else.

When my generation was growing up, being good at school was pretty much the worst thing that you could be (particularly if you didn’t have the social skills to hide it). Kids didn’t like you, and neither did many adults. My fifth grade math teacher would make her classes play a game where one kid stands and walks desk to desk competing with every seated student over math problems until they lose. And she seemed to do it to get other kids mad at the smart kids; she would egg the group on in their anger, laugh at their growing rage.

In the 1970s and ’80s, moments like this were not unusual. All those hilarious caricatures of mean teachers and helpless parents that John Hughes put in his movies were both accurate and a lot less funny than he made them seem.

The typical geek faced harassment from a single school full of people. But for Wil Wheaton the whole world became his schoolyard. Today the term for being humiliated on social media is “being dragged.” That was exactly what “Star Trek” fandom did online and off to Wesley Crusher and Wil Wheaton every week. We dragged him, as hard as we could. A scene in which the beloved Star Trek captain Jean-Luc Picard told him, “Shut up, Wesley,” became an early online meme, and everywhere Wheaton went, he was mocked and hated—and I suspect most especially by those of us who could most identify with him. He was just too much of a mirror of our own experiences.

For the last five years, the “Star Trek” franchise has been going through a kind of renaissance.

Within the show it was much the same. While his castmates treated him well, “Nearly every director we had treated me like I was an idiot who had no idea what I was doing,” Wheaton wrote in a FAQ on his blog. William Shatner, the great Captain James T. Kirk,ridiculed Wheaton, which devastated him. Some of the show’s writers seemed to hate the character, too. Wesley so often becomes the butt of the joke or is in one way or another the problem of the episode (even as he is also often used to magically fix everything). “Let me tell you,” Wheaton wrote recently, “when every room you walk into is filled with people who have already made up their mind about you before you even introduce yourself, you just stop walking into rooms.”

Wheaton quit the industry (and was more or less shunned by his parents for doing so). But over time he made peace with what had happened, and actually became a kind of professional lover of pop culture, with shows, podcasts and writing all built around geeking out on various things, including “Star Trek.” He also grew more able to appreciate the fans who did love his work, who identified with Wesley’s struggles and took comfort that they were not alone.

To its credit the franchise learned from its failures with Wheaton. When “Next Generation” had a spinoff it introduced a new teenager, Jake Sisko (played by Cirroc Lofton). This time he was allowed to be just a normal kid; he had friends, girlfriends and a life of his own. Fans adored him (and still do).

For the last five years, the “Star Trek” franchise has been going through a kind of renaissance. It began with a new show set before the original series, “Star Trek: Discovery,” with a brilliant Black female protagonist who turns out to be Spock’s adopted sister. (You should watch it, it’s fantastic.) The franchise’s regeneration has continued with a number of celebrated animated shows (including one that is made up almost entirely of children) and “Picard,” an unexpected sequel to “Next Generation” in which an elderly Jean-Luc Picard works to save the universe while also trying to make sense of his past.

On last night’s second-season finale of “Picard,” out of the blue and in the most unlikely of ways, the show brought back Wesley Crusher.

On last night’s second-season finale of “Picard,” out of the blue and in the most unlikely of ways, the show brought back Wesley Crusher. And gone was the insecure, please-affirm-me know-it-all of the past. In his place was basically Wheaton himself, an adult with a wry sense of humor about himself and life, who views the universe as a thing of incredible delicacy and beauty, to be watched and protected, and invites someone else who has been horribly mistreated to come with him and do the same. It was just a single scene (which may lead to more), and yet it managed to turn Crusher (and Wheaton) into what he should have always been, someone special, someone to be celebrated and loved.

When Twitter first began, I chose the name “Pop Culture Priest” as a handle, at the suggestion of another America editor, Regina Nigro, who always had a great sense for what might seem smart. I saw it as a statement of aspiration, of where I want to be wandering as a priest, and the people I want to walk with.

Since then I have become kind of embarrassed by it. For one, I don’t know many priests that aren’t into pop culture. I also know a lot of non-clerics who have much more fun and interesting takes on pop culture, starting with Wheaton himself. But for now I keep that handle as a statement of pop culture’s value. I truly believe pop culture is a place that can help us confront the demons of our past and heal. I believe it’s a place that can enable us to understand who we are and what we need to do in our lives.

I even think it’s a place where we can meet God. In its second season, “Picard” reintroduced one of the weirdest and most problematic concepts in all of the franchise, the alien Q, a being so advanced he can change all of reality with the snap of a finger. Played with impish abandon by John de Lancie, Q is often described as a god, and from the first episode of “Next Generation” he has had a strange fascination with Picard. In last night’s finale, Picard insists Q tell him why he’s always been so fascinated with him. The truth is written all over Q’s face, but still Picard keeps asking, “Why, why me?”

Q walks over to Picard, leans down and takes his face in his hands, like a father to a child. “You matter to me,” he says. If I had a thousand homilies I couldn’t come up with a simpler and clearer image of how our God feels about us or looks at us.

“Star Trek” has been around for almost 60 years. And while it has presented itself as a show about exploring strange new worlds, at its heart it has always been about elevating those who society has ignored or shunned—women, people of color, members of the L.G.B.T. community, immigrants, refugees, even national enemies (in the middle of the Cold War, Roddenberry included the Russian Chekov)—and insisting that they matter. We are the aliens for which we seek, and this beautiful and fragile existence would not be what it is without each of us. Thank God we continue to have “Star Trek,” and characters like Wesley Crusher, to help us see that.