Don’t dismiss Lil Nas X because of his controversial video. He has something to teach the church. 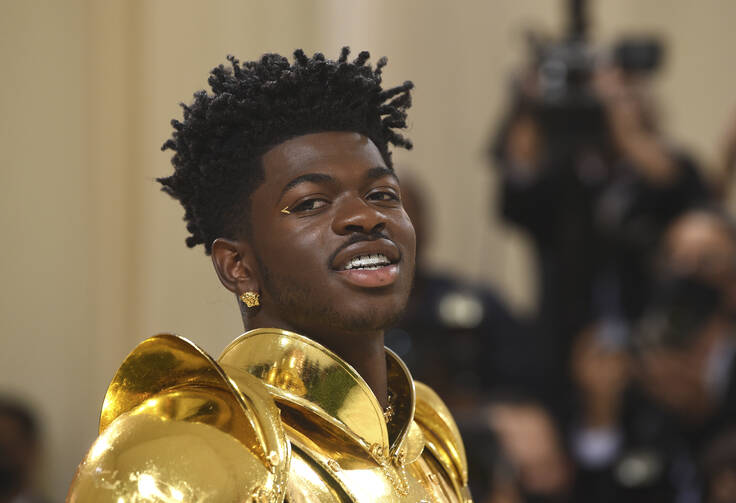 Lil Nas X attends The Metropolitan Museum of Art’s Costume Institute benefit gala celebrating the opening of the “In America: A Lexicon of Fashion” exhibition on Monday, Sept. 13, 2021, in New York. (Photo by Evan Agostini/Invision/AP)

Pop star Lil Nas X is no stranger to going viral. The artist’s smash hit “Old Town Road” is the top certified single of all time, going platinum—having a million downloads, streams or purchases—a record-breaking 15 times. (For comparison, Post Malone and Lady Gaga have never had a song make it past 11.)

But last summer, the gay pop star found himself in the middle of an internet storm. After releasing the music video for his hit song “Montero (Call Me by Your Name),” featuring an infamous scene in which he pole dances into hell to give Satan a lap dance, Lil Nas X became the target of Twitter vitriol from everyone from Fox News to the governor of South Dakota.

The so-called “Satan video”—and the conservative religious backlash it inspired—is the extent of what many people know about Lil Nas X, but the artist and his work deserve better. He recently released his first full length album, “Montero,” a fusion of hip hop and electro pop filled with dance anthems and raw, introspective tracks. Those who dismiss him need to listen to it.

First, “Montero” has been hailed as a rare “no-skip” album, with every track on the record delivering musically and lyrically. It starts with upbeat songs with catchy hooks and strong beats, like the triumphant and danceable “Dolla Sign Slime.” Halfway through the album it pivots to a darker and more reflective tone, with “Tales of Dominica” slowing into a powerful meditation on family dysfunction and “Life After Salem” crescendoing desperately into raw, rock ballad-style vocals about an abusive relationship: “Get yourself an Adderall/ Then throw me up against the wall/ And kick me when I have to crawl/ Ooh, I love it when you show no love at all.”

Lil Nas recently released his first full length album, “Montero,” a fusion of hip hop and electro pop filled with raw, introspective tracks. Those who dismiss him need to listen to it.

But beyond the album’s lyrical excellence and musical range, “Montero” also draws us into a profound meditation on Lil Nas X’s experiences as a Black gay man who grew up Christian in the South. Nas’s father is a gospel singer, and he grew up attending church on Sundays. This Christian background largely shaped Lil Nas X’s early struggle with his gay identity; like many in the L.G.B.T. community who grew up religious, he at first saw being gay as a test from God. In “Sun Goes Down,” he sings: “These gay thoughts would always haunt me/ I prayed God would take it from me/ It’s hard for you when you’re fightin’/ And nobody knows it when you’re silent.” The song then delves into the suicidal ideation he faced while struggling with his gay identity and Christian upbringing; the chorus mourns, “Don’t wanna lie, I don’t want a life/ Send me a gun and I’ll see the sun.”

The revelations in “Sun Goes Down” make the yearning for love that Lil Nas X expresses in other songs on the album all the more poignant and powerful. In the queer anthem “That’s What I Want,” he sings, “Need a boy who can cuddle with me all night/ Keep me warm, love me long, be my sunlight,”confessing plainly on the chorus that “I want someone to love me.” The inclusion of a Gospel choir in the song’s music video further highlights the deep intertwining of his gay identity with his Christian upbringing. The two also explicitly collide in a later track, “Lost in the Citadel,” when he describes an idealized paramour as “my guardian angel,” singing “I only seen you in your halo.”

“Montero” draws us into a profound meditation on Lil Nas X’s experiences as a Black gay man who grew up Christian in the South.

But the most prominent example of religious imagery in his work is in his Book of Genesis-inspired music video for “Montero (Call My by Your Name).” While some Christians might understandably feel uncomfortable with its use of satanic imagery, much of the religious backlash to the video missed that its central point is not Lil Nas X’s descent into hell, but the estrangement from heaven that caused it.

The video opens with Nas sitting under a tree in the Garden of Eden, where his same-sex desire manifests as attraction to an embodiment of the biblical snake. He at first tries to run from his feelings; when he finally gives in to them, he appears in heaven handcuffed and in chains, while a crowded amphitheater of people made of stone pelt him from above.

The implication is clear: Lil Nas X is not welcome because he is gay. This is the reason he descends into his vision of hell; having been rejected by heaven, he feels hell is the one place he can embrace his true identity. Amidst the backlash it inspired, the video has been misunderstood as an attempt to shock instead of as a profoundly personal expression of religious exclusion and spiritual alienation.

This sense of exclusion is only intensified by a subsequent music video for “That’s What I Want,” in which Lil Nas X conducts a romance with a fellow football player before discovering that the man is both closeted and married with a child. Heartbroken by the discovery, Lil Nas X walks down the aisle of a church in a wedding dress. Standing alone in front of the altar, eyeliner running down his face, he wails, “Someone to love, that’s what I [expletive] want.”

If the church will not engage with Lil Nas X and his experiences, he will imagine his own church that will.

The church setting is a clear reference to the unavailability of Christian weddings to gay couples. A close look at the scene also shows that the altarpiece, which normally would be some sort of religious artwork, instead has a picture of the “Montero”album cover. If the church will not engage with Lil Nas X and his experiences, the video seems to say, he will imagine his own church that will.

i love joking but on a serious note making this album was therapy for me. i began healing many unchecked wounds, facing skeltons in my closet i never wanted to, fighting internally every day and crying persistently, MONTERO is truly my baby. thanks for the love 💕🦋

“Montero” is the result of Lil Nas X’s struggle with aspects of his life, his religious experiences and his gay identity. Its honesty and introspection invite us into a kind of communion not only with Lil Nas X, but with those who have shared his experiences more broadly. The exclusion and maligning of L.G.B.T. people, including from Christian schools, churches and communities, has led and will continue to lead to religious trauma in these communities, and thus to a reckoning with Christian imagery in gay culture. It is vital we be open to listening to these stories and engaging with them in a spirit of dialogue and understanding. “Montero”can offer new perspectives into the realities of Black queerness; for some, including some Catholics, it might even give a voice to their own experiences. We are lucky to have it.