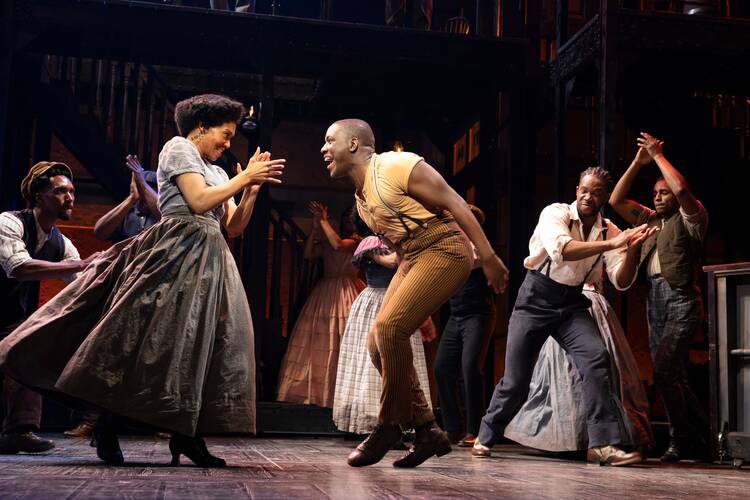 There are notable exceptions, but it has long been my contention that the great animating subject of the American musical is America itself. From “Oklahoma!” to “Hamilton,” from “Show Boat” to “West Side Story,” most of the great American musicals have dramatized our nation’s signature blend of individualism and conformity, abundance and inequality, pitting our purported can-do frontier spirit against the untameable realities of life on a stolen continent. The Brits famously have their “state of the nation” plays, by the likes of John Osborne or Jez Butterworth; we ex-colonial upstarts have “The Music Man,” “Hair” and “Assassins.”

Two new musicals now onstage in New York are making explicit bids to join that tradition. “Suffs,” at the Public Theater, is songwriter Shaina Taub’s attempt to tell the story of the activist women who pushed the 19th Amendment over the finish line and won the vote for American women. And “Paradise Square,” at Broadway’s Barrymore Theatre, is a sprawling effort by multiple authors to narrate the thorny history of the Draft Riots of 1863, in which Irish-Americans protested their conscription into the Union Army by destroying government property and targeting Black New Yorkers.

Both "Suffs" and "Paradise Square" offer fascinating illustrations of the pitfalls of trying to turn complex history into song and dance.

While neither musical is a smashing success, both are earnest and in many ways worthy ventures. And both offer fascinating illustrations of the pitfalls of trying to turn complex history into song and dance.

In “Suffs,” the problem isn’t just the show’s ploddingly chronological storytelling, which is occasionally livened by Taub’s musical inventiveness and given intermittently persuasive shape by director Leigh Silverman and an excellent cast. It is that Taub, to her credit but to the narrative’s detriment, tries to take on board the valid criticism that the mainstream suffragist movement of the early 20th century was led chiefly by and on behalf of white women. They were the main beneficiaries of the 19th Amendment’s right to vote, while Black women in most of the country lived under the shadow of Jim Crow until at least the passage of the Voting Rights Act in 1965.

Taub even has Ida B. Wells, played with spiny conviction by Nikki M. James, deliver the stern rejoinder “Wait My Turn” when Alice Paul informs Wells that her contingent of Black women will have to march on Washington separately from white women. But Paul doesn’t really take the note so much as simply keep the movement moving, while Wells and other voices from the sidelines pop up now and again to complicate the picture, and a clownishly chauvinistic Woodrow Wilson (Grace McLean) appears as a comic, then not so funny, adversary.

It’s not just a sense of Pyrrhic victory that weighs down “Suffs,” which wants to be as uplifting as it is honest. It is also that by cracking open the door, but only a smidgen, to other voices and other narratives, Taub makes us question her own show’s fundamental focus on the rather blank, single-minded figure of Alice Paul. A rude but fair question: Why is this show not about Ida B. Wells?

If "Paradise Square" sounds like an uneasy mix of E.L. Doctorow and Andy Hardy, you are not far off.

Focus is also an issue for “Paradise Square.” The story is set in and around the fictional bar of its title in the Five Points neighborhood of Manhattan, a slum idyll headed by two interracial couples: Black bar owner Nelly O’Brien (Joaquina Kalukango) and her white husband, Willie (Matt Bogart), who leaves in the first scene to join the Irish brigade of the Union Army; and a stiff-necked Black reverend (Nathaniel Stampley) married to a fierce, pistol-packing Irishwoman (Chilina Kennedy). The ungainly plot involves the arrival of two young men, one a fugitive slave—Joe (Sidney DuPont)—the other an Irish immigrant, Owen (A.J. Shively), who jostle for a place in their new home and end up facing off in a climactic dance-off to save the bar.

If that sounds like an uneasy mix of E.L. Doctorow and Andy Hardy, you are not far off. “Paradise Square” has been the long-gestating pet project of “Ragtime” producer Garth Drabinsky, who clearly hoped to recreate some of that musical’s rich tapestry of immigrant and Black history.

As with “Ragtime,” the show’s theory of change ostensibly hangs on a musical metaphor, in this case the songs of Stephen Foster (a faint vestige of an earlier musical by co-writer Larry Kirwan, “Hard Times”). But this thread is thin, both in Jason Howland’s competent if often generic score and in the show’s book; Foster appears as a secondary character, mainly so he can be scolded for appropriating Black music and experience. This storytelling lift is overtaken, thankfully, by choreographer Bill T. Jones’s compare-and-contrast melding of Irish and African dance. In some of the show’s most electrifying moments, the orchestra drops out altogether, and the sounds of step dancing and hambone make their own sublime music.

The other transfixing moments of “Paradise Square” come courtesy of Kalukango, a powerhouse performer who gives both gravity and luster to an over-idealized role, and whose furious, rafter-raising 11 o’clock number, “Let It Burn,” alone makes the show worth seeing. It’s an especially cunning solution to the irresolvable complications of telling a story about racist violence. In real life, this story didn’t end happily for folks like Nelly O’Brien: hundreds of Black people were killed in the Draft Riots, and a quarter of the New York’s Black population left the city in their wake.

While “Paradise Square” doesn’t have the tragic courage to kill off any of its major characters, “Let It Burn” is a rousing attempt to face our nation’s past yet still imagine a better future—to acknowledge, as Langston Hughes once did, that “America was never America to me,” even as he vowed that “America will be.” That’s music I can sing along to.