‘The Sister Boniface Mysteries’: the rare show that gets the Catholic Church (and nuns) right 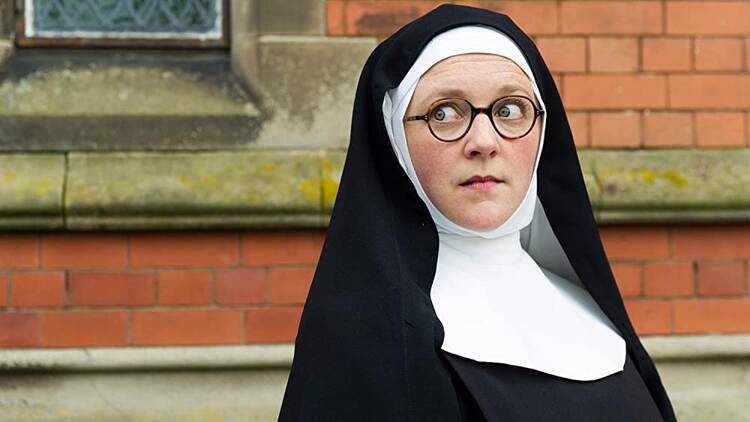 I am always skeptical when I hear about a new show featuring a Catholic nun or priest. Skeptical and fearful: They’re probably the villains, and they’re also almost certainly going to be wearing a habit or cassock, no matter the decade or circumstance. (I get that it looks fancy, Hollywood, but it’s just not what most of us wear today.) Beyond all that, you can pretty much count on a theology built around either hellfire or sentimentality.

Then I caught the new BritBox show, “The Sister Boniface Mysteries.” A spinoff of the long-running “Father Brown” series (itself a reboot of a 1974 TV series based on short stories written by G. K. Chesterton), “Boniface” stars British comedian Lorna Watson as a member of the St. Vincent’s Convent in the aptly-named rural English town of Great Slaughter. And though she is indeed bedecked in a wimple (like “Father Brown,” the show takes place in the 1960s), what’s thrilling about this new show is the way in which it captures not creaky stereotypes of Catholicism but the inspiring richness of women’s religious life.

"The Sister Boniface Mysteries" offers some sense of the rich variety of life in a women’s religious community.

When we meet her, Sister Boniface is a chemistry Ph.D. who was employed as a code breaker with the Bletchley Circle during the Second World War before entering the convent. She now works in Great Slaughter as a vintner for the convent’s winery and as a scientific advisor to the local police. Because of her studies, she is light-years ahead on things like fingerprints, blood lividity and the contamination of crime scenes, and she is deeply respected by her partner, Detective Inspector Sam Gillespie, and others on the force.

It is a unique delight to watch a strong female character be not just tolerated but actively celebrated by the men with whom she works. It is also wonderful to see a detective show centered on a character so filled with hope. Like Ted Lasso, or Leslie Knope from “Parks & Recreation,” Boniface looks upon the world with openness and a happy curiosity. The crimes she confronts never get the better of her; instead, she seems to see them as an invitation to understand humanity better.

And with her knowledge comes a compassion you also don’t normally see on a detective show. As she and Sam race to arrest the killer in the pilot, she muses over what they’ve learned about the upbringing of the murderer, the horrors that the murderer faced and what those must have done to him or her (no spoilers here!), and successfully begs for mercy for the killer’s accomplice, who experienced the same. The show wears its Catholicism lightly, yet at unexpected moments it is clear how deeply it is invested in the life of Jesus.

The show also offers some sense of the rich variety of life in a women’s religious community. There is the younger nun who loves spy shows; the belligerent superior who is afraid of the modern world; and the hardy Sister Reggie, who is Boniface’s good friend and clearly the pragmatic head and strong shoulders of the convent community.

I think that for many Catholics, watching the show will be like hearing a litany of the saints, calling to mind the great women of the church we’ve each known.

Each of these sisters gets moments of their own in which to shine. As someone who finds great spiritual worth in pop culture myself, I was completely taken by the younger nun’s fervorino on the value of popular entertainment. The same episode has a group of nuns refusing to leave Sister Boniface and Sam behind when a bomb is discovered in their chapel, insisting that they believe their prayers can help. “Kept me alive in the Blitz,” one nun shares of her own experiences praying. The moment gives such a unique glimpse into who these women are and what they’ve been through.

The show is beautifully shot and includes plenty of quirky rural characters and scenarios. If you like period British mystery shows like “Grantchester” or “Father Brown,” you will not be disappointed.

But the thing that thrills me most about “Boniface” is that it offers a vision of the church that is both recognizable and challenging. In my life as a Jesuit, I have had the great fortune to work with many talented women religious. And while each of them has had their own unique set of skills and commitments, they all share that same essential down-deep hopefulness and dedication that Ms. Watson and series creator Jude Tindall have given Sister Boniface and the other sisters at St. Vincent’s.

I think that for many Catholics, watching the show will be like hearing a litany of the saints, calling to mind the great women of the church we’ve each known. Even if it is a series about murders in a town called Great Slaughter, “Sister Boniface” is fundamentally a show and a character that remind us of how much good there is to be found in the world, in the church and in us.