Our favorite pop culture stories are sacred to us. Have we lost the ability to critique them? 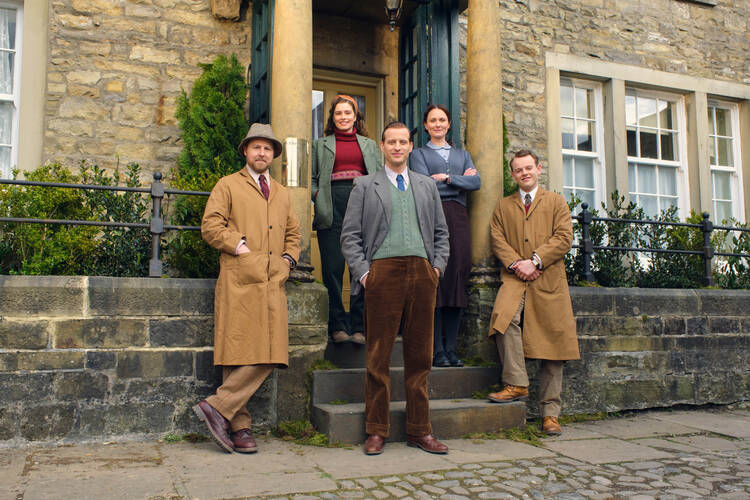 A couple of weeks ago I wrote an article reviewing the British period piece “All Creatures Great and Small,” now airing on PBS. As I wrote, I find the show a bit milquetoast. But more than that, I am troubled by the fact that a show so invested in using animals to get us “all up in our feels” has never presented a storyline that might help us connect the dots to the terrible plight of farm animals in our present time.

The response has been…strong. For a placid little show about 1930s Yorkshire, “All Creatures” fans definitely come ready to fight for their small-town, doe-eyed vet. I knew something truly unusual was happening when I heard from one of my theology teachers. She had friends writing her, asking if she had taught me and what exactly was wrong with me. “Have you turned to the dark side?” she asked.

For a placid little show about 1930s Yorkshire, “All Creatures” fans definitely come ready to fight for their small-town, doe-eyed vet.

As a writer, I am always glad when people love a story so much they are willing to fight for it. I am also aware it is easy to take shots at something someone else made. I much prefer to hold a show or movie up and talk about all the interesting things it has to offer.

But I also wonder at the rage we seem to have at the ready when it comes to our favorite pieces of pop culture. I understand why fans of a TV or film series get angry when it is rebooted or given a new chapter that seems to betray its characters. (Ask me about Rey Skywalker, I dare you.) But if you don’t like a review or a bit of criticism, you don’t have to keep reading. You can just say, “They don’t know what they’re talking about,” and walk away.

Today, many of us don’t do that (and I include myself in that number). Instead we feel this intense need to “defend the story,” as it were. And it’s not just about correcting the record; as my colleague Sam Sawyer, S.J,, put it to me, “Critique has become understood as equivalent to assault.”

Nearly everyone has their sacred texts that can’t be questioned or touched.

I am sure one could use this phenomenon to make an argument about cancel culture and how it’s stifling thoughtful conversation. When everything is interpreted as personal, anything can be read as an attack. But dig a little and you tend to find that nearly everyone has their sacred texts that can’t be questioned or touched.

No, for me the more interesting question is this: When we freak out over a review of our favorite whatever, what exactly do we feel is being assaulted? Why does that nerve flare so strongly when someone writes that “Gilmore Girls” hates women, “Star Trek” has none of the passion of “Star Wars” or Stephen Sondheim was a hack? Why is pop culture criticism sometimes taken so personally?

Part of it might be the implication that you have no taste, or worse. If you like “Battlestar Galactica” and I write that it is a dumpster fire of misogyny, what does that say about you?

But the thing about our sacred cows is that they are sacred for a reason. Think about some of your favorite TV series, albums, video games or novels. What is it about them that you love so much? I am going to guess they had something important to say to you. They helped you understand something about yourselves, or about life. They gave you courage, wisdom or freedom. They helped you feel you are not alone.

Our favorite stories or songs are like the Psalms. They give us the words we couldn’t find to express some aspect of our lives. They act in some way like Jesus with the people he met, showing us that our existence doesn’t have to be the way we thought or the way we were taught by our elders. The things we love show us that there are more possibilities for us.

The most frequent response I received to my review of “All Creatures” was that the show gives viewers what they need in this hard time, namely a space of renewal of their own sense of hope and possibility. The show seems to be offering some people a live-action version ofEdward Hicks’s “Peaceable Kingdom”; yes, there are conflicts (I guess?), but on a deeper level every living being in that community is painted as being in it together. At a time when there is so much shrieking and division everywhere around us, a glimpse and a promise of what life can still be is a blessing indeed.

I wonder at the rage we seem to have at the ready when it comes to our favorite pieces of pop culture.

We identify strongly with certain pop culture products, in other words, because those products have strengthened or enabled our identities. They are sacred to us because they have been occasions of revelation for us. The story has proven so important to us, we view it as an extension of ourselves.

But when we hold on to a story too tightly, or identify with it too fully, the gift we have been given becomes the god we worship. What was a source of liberation becomes our new jail. We’re Gollum screaming for our Precious.

In HBO Max’s new miniseries “Station Eleven,” a major element of the story is a graphic novel that becomes a sort of touchstone for a number of the characters who have survived a society-ending pandemic. It is perhaps the least preposterous twist on a post-apocalypse story I have ever seen; if society fell apart today, the one thing we can be certain of is that there would be a lot of people running around calling themselves Jedi, Hufflepuffs or Avengers and trying to live by the codes they draw from those stories.

What is interesting about “Station Eleven” is the way in which the graphic novel becomes a double-edged sword. For some it provides a motivation for destruction; for others, a source of hope; for still others, an expression of their existential loneliness. In fact, it can be all of those things. Great stories are like that. But the more the characters cling to the book itself, make it their bible or their totem, and need it to be understood in a certain way, the more it warps them and causes them harm.

We are not the stories that we love. Even if we read them again and again and keep finding new insight, new wisdom, we are still far more than they can offer us. In the words of Walt Whitman: We contain multitudes.

And rather than needing to hold them close, either to shield them or to wear as a never-quite-fitting mask, maybe we should think of our relationship to them like jazz. We and the pop cultural texts that speak to us riff upon each other, creating moments that are truly revelatory, that transcend. And what’s important is the music we create together—where it leads us and where it comes from.