Wordle is taking over our social media feeds. But it’s more than just a game—it’s a gift. 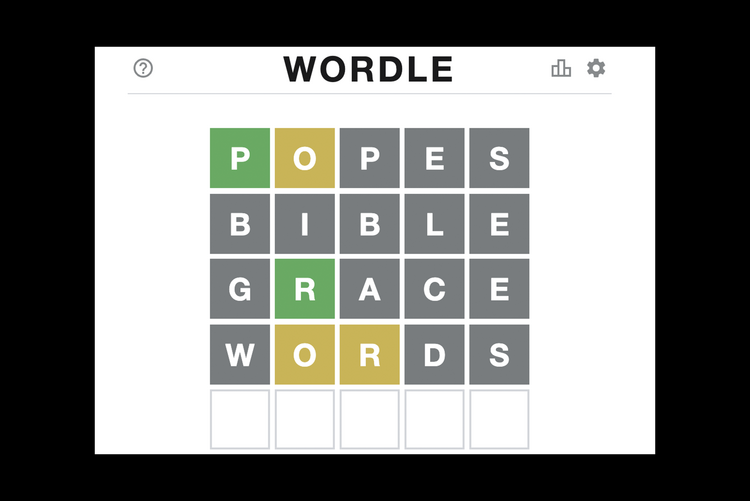 Did anyone else find that somewhere around the New Year their Twitter feeds were suddenly populated with strange, unexplained Tetris-like graphs like, say, this?

If so, maybe you wondered, “What is this joke that I am not in on, and is it cool? Because if so I would like to get in on it right now.” I know I did. And what I discovered was actually at first a pretty major turn off.

Those diagrams and the fractions that are sometimes posted with them represent how quickly the user was able to solve a new online word puzzle game known as Wordle. In the game, you are given six tries to guess a five-letter word. I could just about hear all of our ancestors rolling over in their graves together at the thought that they had sacrificed so much so that you and I could brag about figuring out that today’s word was “crazy” in only two attempts. “We knew that before you even started,” they holler back in unison.

But as reported by The New York Times, there is a very sweet story behind the game. During the pandemic, Brooklyn software designer Josh Wardle and his partner Palak Shah found solace and sanity in The Times’s crossword and Spelling Bee puzzles. So Mr. Wardle decided to make Wordle as a little gift for her.

The New York Times said that “Wordle is a love story.” In a way, isn’t every online bit and bob that we delight in a love story?

Wordle is not a profit-making venture. There are no ads. Your data is not being mined. In fact, when 200,000 people mistakenly bought an old game with a very similar name, Wordle!, on Apple’s App Store, its creator, Steven Cravotta, decided along with Mr. Wardle to donate all proceeds to Boost! West Oakland, a free tutoring and mentoring center in Oakland, Calif.

Somehow it reminded me of other little bits of goodness I have found online, like this GIF of an angry panda:

Someone took the time to stop and make that, so that you and I could post it at a time when the world is such a dumpster fire that words are not enough and laughter is essential.

It’s the same with every GIF we repost, every meme we resend. They are all the product of someone else’s creativity and generosity. In its report, The New York Times said that “Wordle is a love story.” In a way, isn’t every online bit and bob that we delight in a love story?

I’ve started playing Wordle—of course I have. I don’t post how quickly I solved it, which I can assure you has absolutely nothing to do with the fact that I am not very good at it.

But now when I find my morning Twitter feed covered in those little yellow, white and green graphs, I no longer see individuals desperate to show they really are smart so much as a thousand little visual haikus, each of them telling their own story of a person who put a little bit of beauty out in the world for the rest of us to enjoy.

Correction: A previous version of this article stated each letter can only be used once per Wordle. Letters may be repeated.