Christmas 2021 was a dumpster fire. Can we still find beauty in it? 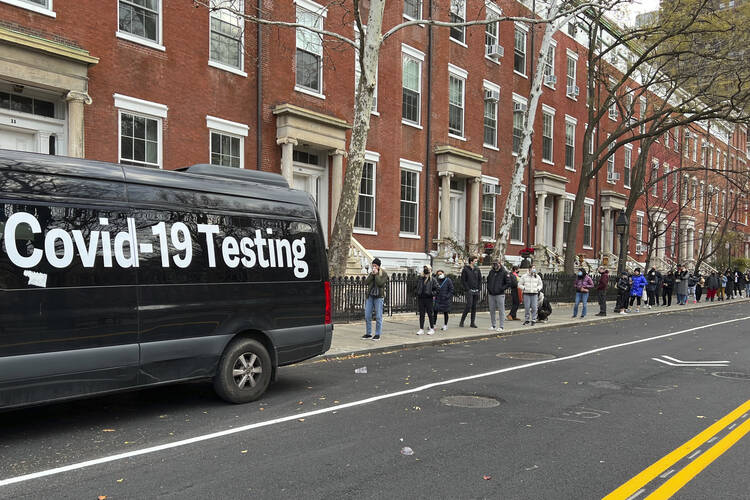 A line stretches down the block as people wait in line to be tested for COVID-19 in New York on Thursday, Dec. 16, 2021. (AP Photo/Brooke Lansdale)

Is it me, or is everything just absolutely terrible right now? I realize last year at this point we were all in month nine of being locked in our homes, unable to see our families and watching Covid-19 cases and deaths explode around us. It just needed fast-moving zombies with axes to complete the sense of grief and doom.

This year’s holiday season thankfully has not been that. But what it has had on offer is a whole new sort of disaster scenario in which you can apparently get Covid by looking at someone who has it? Or saying the name of the variant three times? I really don’t know because no one in the media or at the Centers for Disease Control seems interested in explaining it, nor can anyone satisfactorily narrow down what the likely effects of having it are going to be for the vaccinated. I know people who have been really sick and others who basically got an unwanted week off. As one of the guys I live with said, “What am I supposed to do with a disease whose effects may be anything from nothing to death?”

As one of the guys I live with said, “What am I supposed to do with a disease whose effects may be anything from nothing to death?”

Last year there were clear guidelines regarding what all of us should do—stay home, stay masked—this year we are vaccinated (well, 62 percent of us are), and still there is this whole new surge and, precisely as a result of our only partial-herd immunity, we have no sense of shared guidelines. Do you get tested before you go to visit family? If you are hosting do you require it? Should people be able to come over if it has been 10 days since they tested positive? Fourteen? Five? Not at all, just to be safe? And which test do you require: Rapid? PCR? A signed note from Dr. Fauci?

If you are vaccinated, boostered and healthy, does it even matter if you get tested? Because the thing is, even if you have the very best intentions for safety, actually getting tested this holiday season has been nearly impossible. Rapid tests are to this year what toilet paper was to last year; you just cannot find them in stores right now. And if you are lucky enough to live somewhere where you can walk in and get tested without having to make an appointment a week in advance, expect to wait many hours in line with other people who are no longer standing six feet apart, and some of whom are, by the way, definitely sick.

It seems like pretty much everyone I know at this point either just got Covid or had someone in their family who could not come home for Christmas because they got it. I know people who ended up having nowhere to go for Christmas because the hosts of their party tested positive, and others where their party more or less collapsed around them, including one family that was expecting 22 for dinner and ended up with just four.

It seems like pretty much everyone I know at this point either just got Covid or had someone in their family who could not come home for Christmas because they got it.

To get so close to getting to spend time with your family and then instead be forced to go back into isolation because you have what is, in most cases, no more than a nasty flu, is definitely a lot better than what that would have meant last year. But somehow it also feels so much crueler, like Lucy with the football, where the football is any semblance of joy.

And this is just the situation for those of us who are vaccinated and boosted. If you are unvaccinated, or immunocompromised or you areone of the many health care workers who had to do overtime over the holidays to cover for sick colleagues, the situation is so much worse.

My own family Christmas was pretty standard for 2021. One family member discovered they had Covid-19 on Christmas Eve, so they and their family could not come; another was just getting over the virus. I had been tested the week before, but I still thought I should go somewhere to get a rapid test before heading to our big family party. I went online and found there were no reservations available anywhere for days and no tests in stores, either.

Coming home to my Jesuit community this week, I committed myself to immediately getting tested; when you live with 15 other people, you do not want to mess around. I ended up spending a whole day trying: First I waited in a line that moved about 30 feet in two hours; I gave up and wandered from pharmacy to pharmacy looking for rapid tests, the pharmacists staring at me like I was a kook. Finally, I found out about another site on the west side of town doing rapid tests. I stood in a line so ridiculously short I was dancing in place only partly to keep warm when a staff member came out to confirm that I was here for the rapid S.T.I. test. I am embarrassed to say that I had no idea what that meant. I was even more embarrassed when I found out.

I do not know who made this maze, but as one of the rats may I say, “Bravo.”

Here’s the thing: At some point it just all became so absurd that I started to find it funny. I was literally racing around Manhattan trying to get someone to confirm that I was in fact, as I felt I was, fine. I do not know who made this maze, but as one of the rats may I say, “Bravo.”

And somehow the sheer absurdity of it all shook me free, just a little, but enough to notice the city around me. Let me be clear, it wasn’t like I was suddenly in Oz. We may not have snow yet, but it is still winter here—grey skies, dirty buildings, bags of garbage.

But there were details that popped out—the lime green knit cap worn by a woman grinning at those around her; the professorial tone taken by a boy explaining to his father that all the colors were made of red, blue and yellow; the neighborly way the women in one pharmacy sat and compared notes with me about the whole rapid test situation.

At the very last pharmacy I stopped at on the way home I was also gobsmacked to discover piles of rapid tests. Good news, everybody, I do not have Covid! Yet! Probably!

Even the greyness of it all started to take on a more lovely, familiar quality; aStephen Sondheim song began running through my mind: “Once I hated this city/ Now it can’t get me down/ Slushy, humid and gritty/ What a pretty town.” I actually walked home happy, if you can imagine that.

(At the very last pharmacy I stopped at on the way home I was also gobsmacked to discover piles of rapid tests. Good news, everybody, I do not have Covid! Yet! Probably!)

None of that is to say that life right now does not feel like a dumpster fire of our Christmas dreams or that these holidays are not The Worst. But it was a reminder to me of one of the graces of all those months and months locked away. The world got way too small, yes, but it was also in some ways more visible, or I was more present to its ephemeral, ordinary beauties.

I hear a lot of people saying maybe this is never going to end, or not any time soon. Then I walk away because it is more polite to scream into a pillow.

I hear a lot of people saying maybe this is never going to end, or not any time soon. Then I walk away because it is more polite to scream into a pillow.

What if it is, though? What if stupid variants and scary variants and masks and the C.D.C. shrug emojis are not going away anytime soon?

I do not quite know how to get my brain around what that would mean. But maybe the disappointment, bitterness and just plain exhaustion that we are feeling right now is a part of getting through it. And we can get through it.

Underneath, amid and around it all there are still children in Harry Potter glasses lecturing their parents and handsome piles of garbage and strangers who will for no reason treat us as family.

I’m kidding about the garbage being handsome. But it made you stop and think, didn’t it? How can garbage be handsome? Alongside accepting our disgust and frustration, maybe that is a way of describing our current spiritual project.