Nicole Kidman is fascinating as Lucille Ball, but that’s not enough to save ‘Being the Ricardos’ 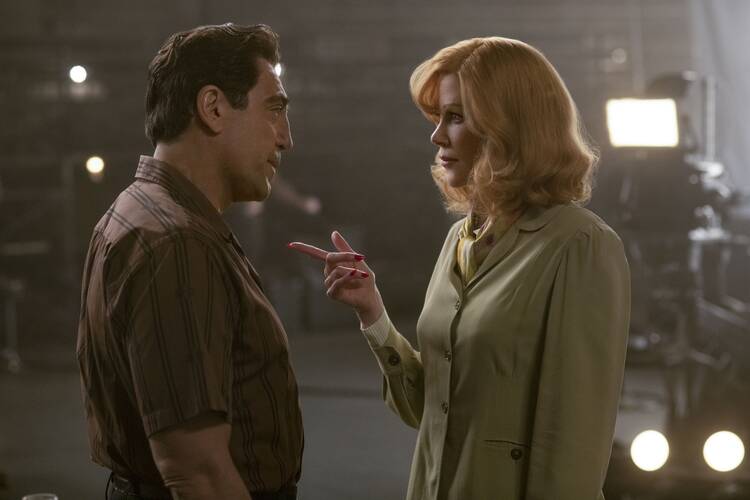 Javier Bardem and Nicole Kidman  in a scene from the film "Being the Ricardos." (CNS photo/Glen Wilson, Amazon Content Services)

During the 1971 anti-war May Day rally in Washington, D.C., which was kicked off by a day-long music festival, the venerable rock band NRBQ performed, accompanied by their frequent accompanists, the Whole Wheat Horns. As they launched into their closing number—an instrumental replete with energetic, Latin-flavored brass—the crowd response was confused. Then astonished. Then euphoric.

It was the theme to “I Love Lucy,” part of the soundtrack to their childhood. Elation ensued. Rapturous applause. A musical bonding among Boomer hippies. NRBQ had certainly read the room, such as it was.

The point of this is that an entire generation or two, or three, had grown up watching reruns of “I Love Lucy,” which originally aired on CBS from 1951-57 and was a groundbreaking sitcom on several fronts—including the Cuban-American marriage at the center of the story.

Viewers want to see Nicole Kidman’s performance as Lucille Ball, which is as fascinating as the characterization is appalling, but ultimately isn’t enough to save the film.

Aaron Sorkin, the seemingly omnipresent screenwriter and occasional director whose latest project is “Being the Ricardos,” which focuses on two crises in the career and marriage of Lucille Ball and Desi Arnaz, is usually drawn to more overtly political topics (“The Social Network,” “The Trial of the Chicago Seven”). But politics certainly played a role in the creation and long-term success of “I Love Lucy.” It wasn’t just that the show presented a “mixed” marriage, which was a hurdle in getting it made, but the spurious accusations that Lucille Ball (Nicole Kidman) was a communist as well as Ball’s (gasp!) pregnancy of 1953, which she and husband Desi Arnaz (Javier Bardem) insisted be part of the show. This threw the network and sponsor Philip Morris into a tizzy. 9You can’t say “pregnant” on television, they harrumphed, and no one ever actually did.) The republic survived.

If none of these crises seem particularly urgent now, almost 70 years after the fact, well, neither does the movie. But for some viewers that might not matter: What they want to see is Kidman’s performance as Lucille Ball (and as Lucy Ricardo), which is as fascinating as the characterization is appalling, but ultimately isn’t enough to save the film.

Kidman is a first-rate, Oscar-winning actress; her Lucille Ball is a fully realized character—not, to Kidman’s everlasting credit, an impersonation. (Her Lucy is something else, but this film is a backstage drama and Lucille dominates the action). The problem is, Sorkin’s Ball ends up being so unlikable you don’t want to spend this much time with her.

Kidman is a first-rate, Oscar-winning actress; her Lucille Ball is a fully realized character. The problem is, Sorkin’s Ball ends up being so unlikable you don’t want to spend this much time with her.

Running a top-rated TV show in the early ‘50s—which Ball did, as the movie makes clear—and being a woman at the same time required a certain level of ruthlessness, cutthroat ambition and political cunning. (It probably still does.) But as written by Sorkin, that’s what Ball is about and virtually all that Ball is about. There is a subplot about Desi’s unfaithfulness, which allows Kidman to show another element of her character, but it’s not enough to make her sympathetic.

Ball treats Vivian Vance, the actress who played Ethel Mertz (Nina Arianda in the film) terribly, she contradicts anything anyone ever says and she is reflexively defensive, which makes her offensive. You feel bad for Desi Arnaz, despite his marital crimes. (Bardem is too old to play the part and too prosperous-looking, but he does capture what must have been the innovative Arnaz’s intelligence and savvy—and his charm, which ultimately worked against him.)

J.K. Simmons plays William Frawley, the veteran character actor who already had more than 100 Hollywood credits to his name (including “Going My Way” and “Miracle on 34th Street”) by the time he started playing the immortal Fred Mertz. Vance apparently resented her Ethel Mertz being married to a character old enough to be her father; Frawley knew it, and the fractious interplay between Arianda and Simmons is often bitterly funny. Meanwhile Lucille Ball comes across as simply bitter—because of the adultery, perhaps, the unfairness of the media, and/or perhaps a constitutional allergy to contentment.

Kidman captures all this. It’s just not easy to be around. If all people knew about Lucy and Desi was what they got from “Being the Ricardos,” they certainly wouldn’t be cheering the theme song at a rock concert.