This band wrote a song in honor of Dorothy Day. Now their album could help make her a saint. 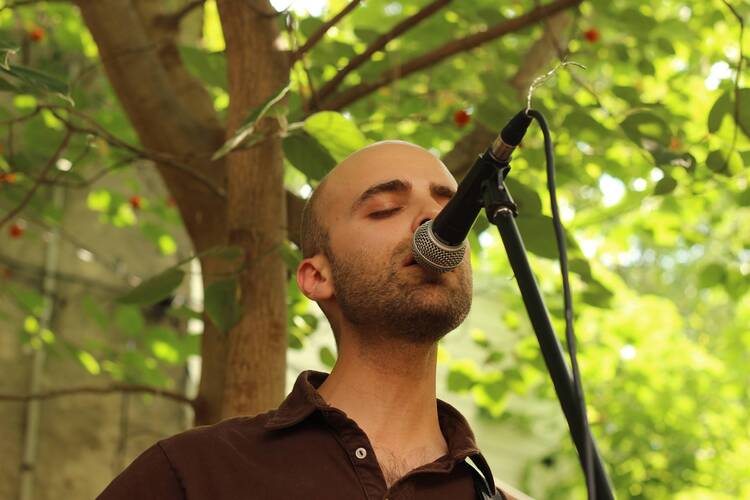 One cloudy November Saturday, Eric Krewson sits in the warmth of St. Joseph House of Hospitality in the East Village in New York City, where Dorothy Day lived from 1968 to 1975. Sharing a breakfast of pancakes, eggs and undercooked bacon, Eric listens to the stories of the community he has commemorated in song.

Eric and the band he headlines, The Chairman Dances, wrote a song that celebrates the friendship of Dorothy Day and Peter Maurin, the founders of the Catholic Worker movement. And that song will shortly be on its way to Rome. The guild preparing Day’s cause for sainthood has included a CD of the song with the materials they are sending to the Congregation for the Causes of Saints.

“I was pretty shocked that they asked me, that someone had heard it and that it was deemed worthwhile to be included,” said Mr. Krewson.

Eric Krewson and the band he headlines, The Chairman Dances, wrote a song that celebrates the friendship of Dorothy Day and Peter Maurin. And that song will shortly be on its way to the Vatican.

Becoming a saint is a supernatural process, but being declared a saint is a process wreathed in bureaucratic humdrum. In order to attain the title of “saint,” a deceased Catholic usually needs an impressive two miracles credited to their intercession. But miracles are often heralded by the mundane, and canonization is no exception. There is a long paperwork process that takes place to get a beloved icon declared “venerable”—usually one miracle shy of “blessed” and two short of “saint.”

For Dorothy Day, who died on this day in 1980, the first stage of the paper-pushing is almost over. The Archdiocese of New York has finished its inquiry into Day’s sainthood. The documents they have compiled as evidence for her reputation of holiness will be sent to the Vatican. On Dec. 8, the feast of the Immaculate Conception, Cardinal Timothy Dolan will bless them at a Mass in St. Patrick’s Cathedral before they are sent to Rome. In addition to the song by The Chairman Dances, the materials include Day’s journal entries, newspaper articles, her several biographies, icons, artwork and lists of buildings and scholarships named in Day’s honor.

The Chairman Dances was started by Mr. Krewson, 35, who first fell in love with music growing up in rural Pennsylvania. He began playing the trumpet in fourth grade until he discovered the guitar in middle school. In high school, he began writing and singing songs.

The Chairman Dances took shape after his graduate studies in musicology. His bandmate, Luke Pigott, has a degree in theology. Along with six others, they formed a band, recorded six albums and still tour in the larger Philadelphia area. In 2016, they played a concert at Maryhouse, the Worker home in the East Village in which Dorothy Day spent the last years of her life.

“I was pretty shocked that they asked me, that someone had heard it and that it was deemed worthwhile to be included,” said Eric Krewson.

Molly Swayze, co-coordinator of the Dorothy Day Guild’s inquiry, reached out to Mr. Krewson on Bandcamp this summer. Ms. Swayze asked if Eric would be willing to include a CD with his song in the documents the Guild is sending to Rome. The documents are supposed to detail Dorothy’s life and spirituality, and demonstrate her reputation for holiness among American Catholics.

The song about Dorothy Day that is included in her cause for canonization is the opening song from Mr. Krewson’s 2016 album, “Time Without Measure.” The title pays homage to Jesuit priest Dan Berrigan’s volume of poetry Time without Number, which won the Lamont Poetry Prize in 1957.

Fittingly, the album tells the story of radicals and saints—some canonized, some popular, some modern, some ancient (Augustine makes an appearance)—but all of them Christians whose lives challenged the social order in some way. “Many of the modern ones were advocates for the poor or anti-war or pro-L.G.B.T. or anti-authoritarian,” said Mr. Krewson. “But the main thing is they’re all saints.”

Mr. Krewson grew up nominally Catholic, but he really began to take his Christianity seriously in graduate school. Since he rediscovered his faith, All Saints Day has been a holiday with deep meaning for him.

The album tells the story of radicals and saints—some canonized, some popular, some modern, some ancient.

The feast of All Saints emphasizes the universal call to holiness and the mystical body of Christ. And that is what resonates with Mr. Krewson. All Saints reminds him to recognize God in all those we encounter. “Witness, to me, is really the number one reason people open themselves up to religious feeling. The album was meant to highlight a communion of saints who I was drawn to, for one reason or another—faithful Christians with whom I could be in dialogue,” he said.

What made him write a song about Dorothy?

Mr. Krewson met his wife, Natalie, eight years ago. Upon their first meeting, they exchanged books that were important to them. He gave her Marilynne Robinson’s Gilead, and she gave him a copy of The Long Loneliness.

Mr. Krewson was immediately impressed with Dorothy’s account of her life. The effects of the book continue to resonate with him. “She’s amazing,” he says, simply. Dorothy’s life and words have influenced other songs of his—he has even written ahymn inspired by her.

Dorothy Day and Peter Maurin aren’t the only Catholic radicals represented on “Time Without Measure.”

There is a light-hearted ballad about two members of the Catonsville Nine—the famous anti-war action that launched Philip and Dan Berrigan to national fame as holy outlaws. But the song focuses on the experience of two lay participants, Thomas and Marjorie Melville. A former priest and Maryknoll sister who had recently married, Thomas and Marjorie are depicted on their drive to Catonsville with homemade napalm on their laps, imagining their marriage in and after prison.

“My vocation is to write music—to write—to do it responsibly, and to do it for God’s glory.”

Mr. Krewson has an affinity for the stories of “all the activists who didn’t write.” He finds the radical Christians of the 20th century whose legacy endures are the ones with extensive literary trails. But he is interested in writing the stories of those Christians who kept busy living their story rather than recording it.

His enthusiasm for these ordinary men and women who took radical actions for peace is palpable. His eyes light up and his soft voice rises slightly when talking about the Catonsville Nine or their predecessors, the Baltimore Four.“All of these people are awesome,” he says. “And it’s incredible learning about these things they did in the name of God, in the name of Jesus.”

One of the beauties of Christianity he rediscovered in his 20s was its power as a catalyst for social change. “When you dig deeper and learn more about our faith, we’re uniquely qualified to understand how every institution is fallen, in a way that progressives without faith cannot,” Mr. Krewson said.

His goal is for his songwriting to participate in this radical Christian tradition—a way of sharing the theological vision that inspired the Melvilles, the Berrigan brothers, Dorothy and Peter.

“My vocation is to write music—to write—to do it responsibly, and to do it for God’s glory,” he said.

Several Saturdays after his visit to Maryhouse, Eric sat around a group of young Catholic Workers in Lancaster, Pa., a short drive away from where he was staying with his in-laws.

Over well-seasoned eggs in the cozy dining room, the conversation turned to liturgy and cultivation, the seasonal rhythm of farming and the liturgical year, and of just relationship with the land. Eric chimed in, sharing some insights from his studies of eco-theology.

On the wall of the Lancaster Catholic Worker dining room, just behind Eric’s head, Dorothy Day’s words describe the movement’s beginning: in time without measure—time spent giving attention and sympathy to one another—time spent not as money but love: “We have all known the long loneliness, and we have learned that the only solution is love and that love comes with community. It all happened while we sat there talking and it is still going on.”