What does a Catholic priest think about ‘Midnight Mass’? 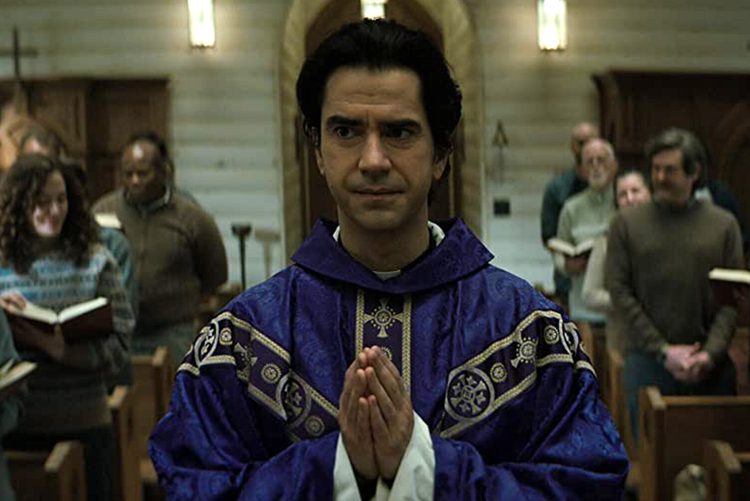 What does a Catholic priest make of “Midnight Mass”? Is the show, which premiered in September on Netflix, anti-Catholic? Viewers of all faiths will have questions about Mike Flanagan’s new show, but Catholics in particular may be wondering how a horror show so draped in Catholic imagery should be assessed from a Catholic point of view.

Having been a priest for 37 years, I found myself answering that question with three points, such as one might find in a homily or a catechism class: 1) I sympathize with the sin; 2) the theology hits, and misses, the target; and 3) Mike Flanagan, the series’ creator and director, is more Catholic than he knows.

The sin of Monsignor John Pruitt is understandable, if diabolical

First, I sympathize with the sin of the priest. The show’s plot is launched when Monsignor John Pruitt (Hamish Linklater), the longtime pastor of a parish on a small island, returns from a trip to the Holy Land with an angel that has transformed his frailing mind and body back into a younger version of himself. It turns out to have deadly, vampiric consequences for Pruitt and the entire island. As I get older, I find that I myself am not able to get out of bed each morning without my body tormenting me until it is again limber. Monsignor Pruitt is older and more disabled than I when he is given, unexpectedly, “the gift of eternal life” in a Judean desert.

What does a Catholic priest make of “Midnight Mass”? Is the Netflix show anti-Catholic?

I can understand why a pastor would want to share this favor with his Crockett Island congregation, which he has evidently served for almost all his priestly life. How can I not be sympathetic, when the hardest thing about being a priest is watching people’s suffering, knowing that you will continue to do so until your own end comes? And yet the example of Jesus remains: He was not indifferent to the suffering he encountered, and perhaps he even was tempted to stay in one spot and heal everyone who came; but the gospels tell us that he always moved on to continue his preaching. There was an evil greater than physical suffering that he had to defeat.

In yielding to the most benevolent of temptations, Monsignor Pruitt becomes a “Judas priest.” An old tradition suggests that the disciple Judas intended to accomplish something good in handing Jesus to his enemies. Perhaps he thought it would compel Christ to call down his kingdom. Yet he commits the primordial sin of substituting his own will, however well intentioned, for the will of God.

There is a classic of Catholic spirituality, The Spiritual Combat (1589), that repeatedly warns us against self-deception. The author, an Italian Theatine priest named Lorenzo Scupoli, wrote that “distrust of yourself is so necessary in the spiritual combat, that without it you may be assured that you will neither gain the desired victory, nor be able to overcome even the weakest of your passions.” Father Scupuli tells us to distrust our intellect, our inspirations, our inclinations, even our memories. They can all be tainted by sin. The modern reader might assess this view to be overly suspicious, even to the point of neurosis, but if one is going to follow the Holy Spirit, one must make every effort to avoid self-deception.

[Review: Netflix’s ‘Midnight Mass’ is Catholic horror at its best]

St. Thomas Aquinas suggested that Satan mimics God. The fallen angels are self-deceived and thus irretrievably ignorant, but they imitate what they see in Christ and his church. Hence there are black Masses, priests, sacraments and even liturgical seasons. Each are tangible, effective expressions of evil’s seduction. For example, Monsignor Pruitt is given a chalice, but it is not of Christ’s blood. This is not the cup of suffering Christ himself asked to be spared, not the cup he asked his disciples if they could drink. No, this cup takes away suffering. Monsignor Pruitt is given new life. He loves his people. Why not take the place of God and offer them this new, pain-free existence? Yes, I can sympathize with him.

‘Midnight Mass’ has a great theology of sin, and a poor understanding of the afterlife.

In the show’s depiction of sin, the theology of “Midnight Mass” is on target. Monsignor Pruitt is himself a victim of sin. He stumbles into a Judean cave, where evil attacks him and leads him into sin. Like the rest of us, he is predisposed to this assault. We eventually learn that he still carries an old sin—that he secretly fathered a child with a woman on the island that he has always been in love with. It’s a sin that he is not willing to wash away, not if—like his youth—it can be revived.

In the show’s depiction of sin, the theology of “Midnight Mass” is on target.

What I like about Mike Flanagan’s horror stories—he previously created “The Haunting of Hill House” and “The Haunting of Bly Manor” for Netflix—is the troubling intrigue, rather than the instant fright, that they deliver. Even those who say they cannot watch scary movies should view his work. Flanagan’s stories can startle, but their aim is more to unsettle. You come to a place where evil dwells. It is only expunged when its story has been told, when we understand who sinned and how this sin continues to reverberate in this place. Those who become the victims of the evil that haunts a particular spot often choose to succumb to it. The courageous successfully resist it.

One of the most valiant characters in “Midnight Mass” is the local sheriff, played by Rahul Kohli. He and his son Ali (Rahul Abburi) are the only Muslims on the island. Before Sheriff Hassan confronts the macabre evil that haunts the island, he stands steadfast against a religious extremism that would sweep away separation of church and state in favor of a newly arrived kingdom. Whose kingdom? And who gets to decide that for others?

The great villain of the show is not Monsignor Pruitt, who dies repentant. It is the church lady, Bev Keane, played by Samantha Sloyan. What else can one call her? She’s a sacristan, eucharistic minister, lector, catechist and all-about-town judgmental activist. She looks evil in the face and decides that it is just the tonic this sick world needs. Bev Keane is the avatar of the religious zealots who ravage America today. They see a sin, typically one they themselves would never be tempted to commit, and they are willing to wipe away tolerance, patience and compassion itself in their desire to strike at it. They quote generously from Scripture and tradition. Their only criterion is that the judgment be directed outward toward others who have sinned. Only self-introspection is banished.

Bev Keane is the avatar of the religious zealots who ravage America today.

Where is the theology of “Midnight Mass” off-target? In its understanding of the afterlife. We are offered three versions. The first is proposed by a penitent, alcoholic atheist, Riley Flynn (Zach Gilford). He suggests that near-death experiences, which seem to promise so much, are nothing more than the chemically saturated last throes of consciousness. Erin Greene, his once and future romantic partner (played by Flanagan’s actor wife Kate Siegel), counters that version with the most Catholic of heavens, a place where loves are united and live forever at the pinnacle of their years, even the unborn.

Later Erin offers another view, evidently Flanagan’s own: There is a unity to the cosmos, an ancient, undisturbed tranquility. It is human consciousness that is the disturbance, the fleeting, unsettling dream. Yet come the end, the delusions of human life are to be drowned in a sea of eternity. There are no statues of the saints in Crockett Island’s St. Patrick Church, and the crucifix is mostly draped. The eternal for Flanagan has no eyes, no heart, no communion with us.

I understand the seductive appeal of this view, but I would point out that it cannot explain why Riley Flynn is a penitent atheist, why he struggles so valiantly against alcoholism. How can one regret a dream, even a nightmare? Nor does it explain why many of the island’s residents, having confessed their guilt, await the judgment of God with acceptance. No one who holds this view can comprehend why the Muslim sheriff dies praying, or even why he resists the tyranny of prejudice in the first place. Why should one strive against evil if it is only an illusion? And why, in his last living moment, does Monsignor Pruitt cast aside his clerical collar and embrace a woman he’s loved in secret his entire life? Why, at the last, confess a lie if human life is itself a delusion?

Mike Flanagan is more Catholic than he knows.

And then there is the creator of the series, Mike Flanagan, the former altar boy turned atheist. Mike, this old priest insists that you are more Catholic than you know. You want God, but you fear being disappointed by God. You believe in sin, not just as an extrinsic rebellion against an imagined potentate but as a true revolt against the goodness of our own nature. And you believe that sin, once committed, takes on a life of its own, one that haunts people and places, one that must be resisted.

You are quite sure that we all are subject—priest and people—to its allure and its alienation. Only the truly virtuous see the horror that sin is; and they have the free will to resist it, even when others do not. You still know your catechism. There is a goodness outside us, one greater than the evil that haunts us. If we seek it out, if we open ourselves to it, if we learn to sacrifice ourselves to it, it will yet dispel the terrors of the night.

[Can’t get enough of “Midnight Mass”? Join the Jesuitical podcast’s Patreon community to hear hosts Ashley McKinless and Zac Davis along with America culture writer Jim McDermott, S.J., talk about their favorite moments from the show.]