‘Mass’ captures grief in the wake of a school shooting. That unfiltered pain is a liturgical experience. 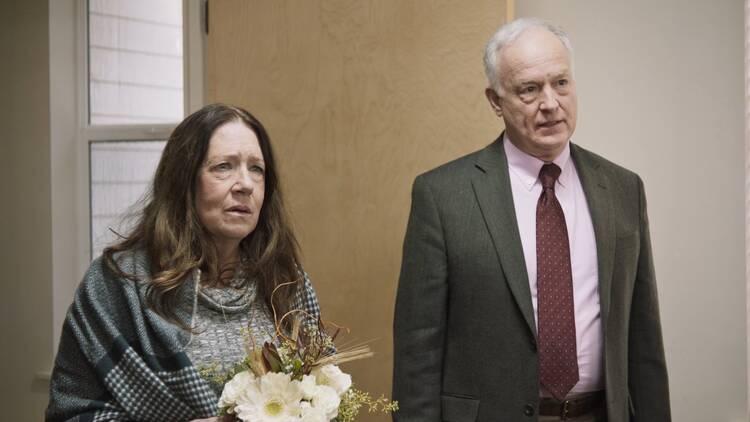 Ann Down and Reed Birney star in a scene from the movie "Mass." (CNS photo/Bleecker Street)

When someone kills someone you love, you never really escape it. It constitutes an absolute and astonishing rupture in reality, a black hole that you desperately want to fix not just to restore your life and your family to what it was, but because it feels like your own survival depends upon it. And there is no plugging that hole or even fighting its pull. Like Dante at the entrance to Hell, the only way out is through.

The new film “Mass,” written and directed by Fran Kranz, captures perfectly this experience of tragic loss, from two radically different perspectives. Jason Isaacs and Marsha Plimpton star as Jay and Gail, the parents of a child murdered in a school shooting. Ann Dowd and Reed Birney co-star as Richard and Linda, whose son was the shooter and also died. At some point long after the incident, the four of them agree to meet. Except for a few brief scenes at the beginning and the end, the entire film takes place in a small meeting space in a parish office. The story involves the four of them simply trying to talk their way through this nightmare in which they have found themselves.

That conceit—four characters in one room—might make it sound like “Mass” was originally a stage play, but in fact Kranz wrote it for the cinema. And even as his script relies on some very theatrical conceits, including some heart-wrenching monologues, the film never has that stagey, filmed-play feeling that often undermines theatrical adaptations. I think this is because their circumstance captures their experience. Of course these four parents should be trapped in a small room together. That’s how life has been for them since the day it happened.

It seems strange to worry about spoilers in a story where the “big twist” has long since occurred. There are no sudden reveals to be found here that can somehow explain why Richard and Linda’s son did what he did, or heal what Jay and Gail have lost, or even bring any of these parents back to the people they once were. Yet the film has tremendous suspense built into it just by virtue of the fragility of its characters’ situation. In a minefield a single footstep is stressful.

The film has tremendous suspense. In a minefield a single footstep is stressful.

With each line of conversation, each gesture, each choice the characters make, the viewer feels the risk, the sense they could destroy themselves or each other. It really is a film you are better off not knowing too much about, other than that it is worth the journey. The actors are working at the top of their game and each is given an opportunity to share something of what it is to be human that is truly profound.

I saw “Mass” at Sundance’s virtual festival in February. I have to admit I was hesitant to view it, not only because of some personal experience in somewhat analogous terrain, but because who wants to spend an afternoon watching four absolutely shattered human beings fighting through their grief? Just the idea of watching such a film can generate that same sense the characters feel of being trapped.

I certainly understand that desire to stay away from this kind of unfiltered pain. But I also know from my experiences as a Jesuit that there is something miraculous that can happen when you sit in the presence of great suffering, that it does not burn you down in the way you might expect—or perhaps better, that it does, but that’s a gift. Naked in the ruins of the fantasies we tell ourselves, the walls we hide behind, we discover a kind of compassion and communion with other people that we didn’t know we were missing.

“Mass” is about a mass shooting. But it is also a kind of liturgical experience. We Catholics tend to remind ourselves that the term eucharist comes from the Greek word for gratitude or giving thanks. But the prayers of our Mass are filled with moments in which we cry out to God for help or forgiveness. Thanksgiving is always a journey, and often a harrowing one at that.