Notre Dame football is off to a hot start. Don’t get your hopes up. 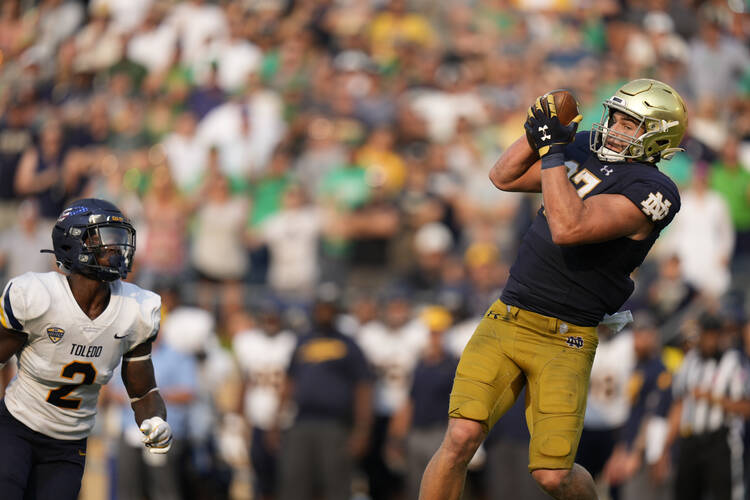 Back in the mists of time, a newly minted editor in chief of America, Matt Malone, S.J., asked me to write a few words on the sudden renaissance of what was once a source of great pride for American Catholics: the Fighting Irish of Notre Dame. Their football team had started the 2012 season unranked, but reeled off 12 straight wins by Thanksgiving weekend, giving up an average of only 10 points a game en route to a perfect regular season record, a #1 ranking in most national polls and a slot in the national collegiate football championship against Alabama in early 2013.

I did my best to wax eloquent: about the Four Horsemen of yore, about George Gipp and Raghib “Rocket” Ismail and Tim Brown and Joe Montana and Joe Theismann; even standout 1940s defensive lineman James “Jungle Jim” Martin got a mention before the editors decided it would cause too much confusion for our readers. (I had free rein otherwise; the only America editor who admitted to watching college football also wanted the sport banned.) Would the Fighting Irish bring home their first title since 1988, I mused? Could we once again proudly cheer, cheer for old Notre Dame? Wake up the echoes cheering her name?

The brave warriors of the Gold and Blue stormed into a Crimson Tide in the first week of 2013, and...realized they couldn’t swim. Alabama won the game and the national championship, 42-14.

Such a chastening experience should temper the expectations of every fan, no? Not by a long shot. Half a dozen times in the decade since, Notre Dame has begun the season with a legion of supporters (and more than a few sportswriters and prognosticators) proclaiming the team had a legitimate case for being considered the #1 team in the country. In five of those years, Notre Dame won 10 or more games; six times they ended the season ranked in the AP top 20 in the country. But not a single time has that elusive national title come back under the Golden Dome.

The Fighting Irish seem to begin every season flying high and then are thrown back to earth on some Saturday with a considerable thud. Here we go again.

While that 2012 team didn’t claw its way to the top spot until November, the years since have seen the reverse: The Fighting Irish seem to begin every season flying high and then are thrown back to earth on some Saturday with a considerable thud.

Yes, the Fighting Irish are undefeated. Yes, they have beaten several very good teams. Yes, their opponent this weekend, Cincinnati, is the only currently nationally-ranked team left on their schedule. New Notre Dame quarterback Jack Coan has offered some thrilling highlights that will surely be memorialized in a terrible movie someday, including throwing a game-winning touchdown against Toledo just moments after suffering the bane of middle-aged dads everywhere, a dislocated middle finger. All signs point toward one thing, the same thing every Notre Dame fan says and hears every September: This is going to be the year in South Bend.

Who are we kidding? Notre Dame is doomed.

New Notre Dame quarterback Jack Coan has offered some thrilling highlights that will surely be memorialized in a terrible movie someday.

Trust me: The disappointment you felt upon realizing you had spent actual money to watch “Rudy” in a theater—or when you found out the actual Rudy Ruettiger is a Trumper—will be nothing compared to the letdown the Fighting Irish will deliver us on a Saturday soon—if not tomorrow. Why? Because playing an independent schedule against low-ranked (or unranked) teams will never, ever prepare the team to face the Alabamas, the Clemsons, the Oklahomas, even the Ohio States of the world. In real life, an outside linebacker from the SEC picks his teeth with Rudy’s ribs.

Don’t get me wrong: Most Saturdays every autumn, I too am camped out in front of a television screen watching the Fighting Irish. It’s hard not to drink the Kool-Aid if you grew up Irish Catholic in America. Also, there are two Notre Dame alumni in my immediate family. But it’s possible to root for Notre Dame while still spraining an eyeball at the impossible delusions of grandeur to which this team and its adherents cling.

In real life, an outside linebacker from the SEC picks his teeth with Rudy’s ribs.

If you’re a Notre Dame fan, I know you’re furious right now: How dare he? Truth be told, the Notre Dame fan base is not known for having a thick skin in general, either when it comes to criticism or when it’s time for a laugh—so I brought some jokes (both stolen):

Why are they planning to resurface the Notre Dame field with cardboard?

What do the Fighting Irish and marijuana have in common?

Put ‘em in a Bowl, they’re sure to get smoked.

It’s okay, Fighting Irish fans. Remember the words of our great U.S. senator Daniel Patrick Moynihan: “I don't think there's any point in being Irish,” that quintessential Irish American once said, “if you don’t know that the world is going to break your heart eventually.”