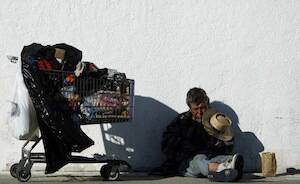 The story of the good Samaritan played out recently in New York City, a Bible story familiar to anyone who works with the indigent. A New York City police officer saw a homeless man without shoes on a cold night. He bought him a pair of boots, a simple act of charity that was caught on camera. The police officer became a folk hero while the homeless man disappeared into the night. A week later he was found again, but without shoes. “Those shoes are hidden. They are worth a lot of money,” he explained to The New York Times. “I could lose my life.”

Acts of charity, however well meant, sometimes are not enough to help people in need. This is not a reason to abandon good works this Christmas season, but a reminder that charity is a demanding virtue, one that Christians should seek to practice every day. Charity calls us to establish bonds of solidarity with the needy and to address the causes of their need. Given the large number of homeless men and women, many of them afflicted with mental illness, the call of charity can seem like an impossible obligation. Yet if the journey begins with a personal encounter, it can grow into something deeper, and real change can ensue.

Here is the hard truth: It is not enough for a Christian to give a man of pair of shoes. He must also walk in them.

As the nation tiptoes an inch or two closer to its much-hyped “fiscal cliff,” it is hard to tell how seriously to take much of the performances from the Boehner and Obama camps as the final session of the 112th Congress winds down.

All the fiscal Kabuki theater in Washington may not lead, this year, to the long-sought grand compromise on sustainable federal spending, but it may get the nation to an agreement that could provide the foundation for a longer, presumably more sensible discussion on tax and spending reform and budget priorities in 2013. Then, as a primary signatory in the Circle of Protection, a social services advocacy coalition, the U.S. Conference of Catholic Bishops will continue its defense of domestic and international programs that support the poorest and most vulnerable among us.

Another development worth following is the viability of a plan to put the semiannual debt-ceiling follies out of our collective miseries. Periodically, after passing one of its gargantuan budgets, Congress, in a bout of politically expedient buyer’s remorse, attempts to thwart itself by refusing to approve a hike in the national debt ceiling, a fungible limit on borrowing. This is political performance art that merely empowers a small group of deficit dead-enders in Congress while it offers the potential to gravely wound the credibility of the United States and throw global bond markets into turmoil. After Congress has ordered the meal, it cannot refuse to accept the check.

An upset football victory by the University of Notre Dame over Army once led the famed sportswriter Grantland Rice to conjure up an image of the apocalypse to describe Notre Dame’s backfield: “Outlined against a blue-gray October sky, the Four Horsemen rode again. In dramatic lore their names are Famine, Pestilence, Destruction and Death. These are only aliases. Their real names are Stuhldreher, Miller, Crowley and Layden.” Named were Notre Dame’s quarterback, right halfback, left halfback and fullback, respectively; and none of the four weighed more than 170 pounds. Nevertheless, they and the legendary coach Knute Rockne led Notre Dame to an undefeated season and a victory over Stanford in the 1925 Rose Bowl to win the national championship.

Dare one wonder if the harbingers of the Last Judgment ride for real this time around? As signs of the apocalypse go, recent weeks have ranked pretty high for Notre Dame fans. Notre Dame’s football team is once again undefeated and is ranked No. 1 in the country going into January’s Bowl Championship Series national championship game. Notre Dame has won its fair share of national championships in the past, of course (eight in all, or 11, or 13, depending on your point of view and how long you’ve been tailgating outside the stadium), but it’s been 24 years since the Fighting Irish last finished on top; they went undefeated to win the 1988 crown.

That near quarter-century has been marked by periodic bursts of optimism amid a lot of embarrassment and disappointment, both on and off the field.

No more! On Jan. 7, 2013, the Fighting Irish will have a chance to go 13-0 and bring a title home to South Bend. One caveat: Notre Dame’s opponent, Alabama, has won more national championships and is a nine- or ten-point favorite to win this year’s title game. Which leads one to wonder if there is another biblical figure who might be more apt than the Four Horsemen this time around: David with his slingshot against the mighty Goliath.