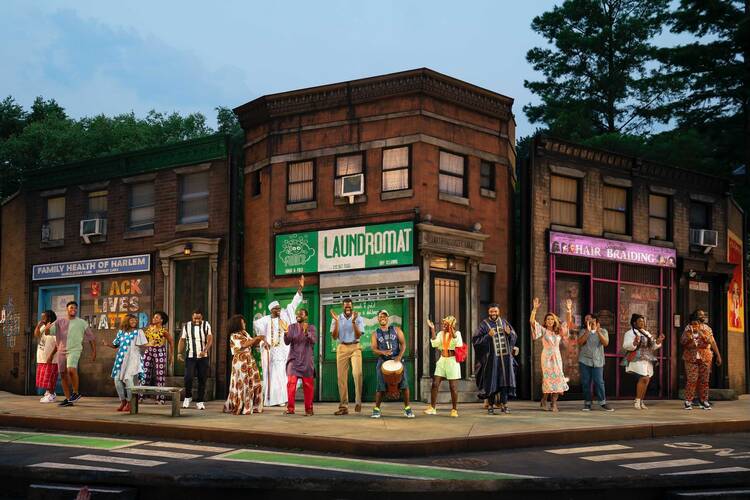 Photo courtesy of the Public Theater.

Shakespeare in the Park is more than just a brand name; it is also one of New York City’s most heartening, communitarian civic institutions and practices. The current return of this free-ticketed outdoor mainstay of the Delacorte Theatre in Central Park would be cause for celebration in itself; that this return happens to be the occasion of a bravura crowd-pleaser, “Merry Wives”—a free adaptation by playwright Jocelyn Bioh of the Bard’s “Merry Wives of Windsor”—feels like nothing short of a heavenly blessing.

Though this Public Theater production has been bedeviled by a cast injury, some Covid-related postponements and, on the first night I tried to see it, cancellation due to rain and lightning, I am glad I came back the next night to try again. After a year of pandemic loss and civic protest, in which Shakespeare in the Park was forced to take its first summer off since 1962, to sit among friendly strangers on a balmy New York night and to feel the palpable exchange of delight circulate from the stage, through the audience and back again—well, this may be a frothy, trifling comedy, but I noticed that I was brushing back tears by the end.

That this production works so well is all the more miraculous given that “Merry Wives of Windsor” is—let’s not mince words—far from top-tier Shakespeare. Following the sexual misadventures of Falstaff, the corpulent knight from the “Henry” plays, it plays a bit like a clueless sitcom spinoff from a meaty drama, as if someone had watched “The Sopranos” and thought, “Hey, what if we put Paulie Walnuts in ‘Three’s Company’?” But Ms. Bioh’s adaptation, set among African immigrants in current-day Harlem, leans into the piece’s primary colors and goofy plotting, and under director Saheem Ali the cast plays it all to the hilt with infectious relish. A sense of festive occasion pervades even the show’s weaker moments.

The first entrance of Jacob Ming-Trent’s Falstaff, amid an incomprehensible neighborhood dispute, sets the show’s unflappable comic register. Dressed in a droopy T-shirt and bermuda shorts so capacious they resemble a kilt, this Falstaff takes one look at his interlocutors and determines, probably rightly, that they’re not worth his time. He grunts and returns to his meal.

That this production works so well is all the more miraculous given that “Merry Wives of Windsor” is—let’s not mince words—far from top-tier Shakespeare.

When we later meet him in his retro bachelor pad, we see a framed poster over his bed that looks like an album cover, showing him crowned over the words “Discretion/Valor,” in a glancing nod to his knightly exploits and the Henriad. But where the Falstaff of “Henry IV” and “Henry V” was a big-talking hypocrite, this Falstaff is a dimwit voluptuary who simply decides one day to bed two married women he barely knows and who pursues this aim in the most bald-faced way possible: He sends the identical overture, simultaneously, to both Madame Page and Madame Ford. No sooner do they read and compare his lusty letters than they vow revenge, eventually roping their husbands into a plot to roast this would-be Don Juan.

Many Shakespeare plays have secondary romances, often comic reflections of the central couplings: the shepherds in “As You Like It,” Toby and Maria in “Twelfth Night.” In “Merry Wives,” all the story strands are equally low-stakes; they all feel like diverting subplots. Madame Page and her husband are eager to marry off their daughter, Ann, but they can’t agree on the right suitor, leading to several sweetly silly machinations. The neighborhood pastor and doctor have an inexplicable rivalry that abruptly ends after a hilariously low-impact duel involving nunchucks and a baseball bat.

On Broadway ‘In the Heights’ broke barriers and took chances. Can the film do the same?
John Anderson

That’s just how this “Merry Wives” rolls: Folks gossip, plot, argue, joke and fuss. They turn on a dime from jealousy to joy, from lust to disgust. There’s no explanation or psychologizing on offer, let alone any mortal threat. The closest the show comes to explication is in a diverting apocryphal monologue from Falstaff, who attributes his misbegotten lust to the last 16 months being cooped up watching Netflix. “Can you blame me for wanting to get with Madame Page and Madame Page?” he wonders aloud, asking us to give him a “Hell yeah.” But he hardly insists on this excuse; instead, he shrugs and gets back to the comic business of the play.

Transcendent, communal moments like these, so long denied us by this still raging pandemic, have been worth the wait, and they are more than worth the trouble.

It’s a business this production knows and executes very well. There’s not a weak link in the cast, but I especially warmed to the contrasting styles of Pascale Armand and Susan Kelechi Watson as the title wives; I would happily watch a TV series centered on their fantastic exploits, especially if it were costumed in such eye-popping style by Dede Ayite. MaYaa Boateng and Abena are appealing as young lovers, here given a same-sex makeover.

Also standing out as a sort of busybody/fixer is Angela Grovey’s Mama Quickly, who bustles blithely among the various plots until she grabs center stage for a fierce, climactic incantation. The “fairy play” with which the community humiliates Falstaff here takes on an explicitly African overlay. As the set parts, and we face Belvedere Castle, the trees and the sky, we are back in the sacred, ancient communion of the theater. For a moment, at least, petty human struggles—both those of the stage characters and those of us in the audience, who for now must stand in line with our vaccination cards and masks at the ready—fade and evanesce in the night air. Transcendent, communal moments like these, so long denied us by this still raging pandemic, have been worth the wait, and they are more than worth the trouble.