‘The Chosen’ dares to imagine stories about Jesus and the disciples that aren’t in the Gospels. It’s a revelation. 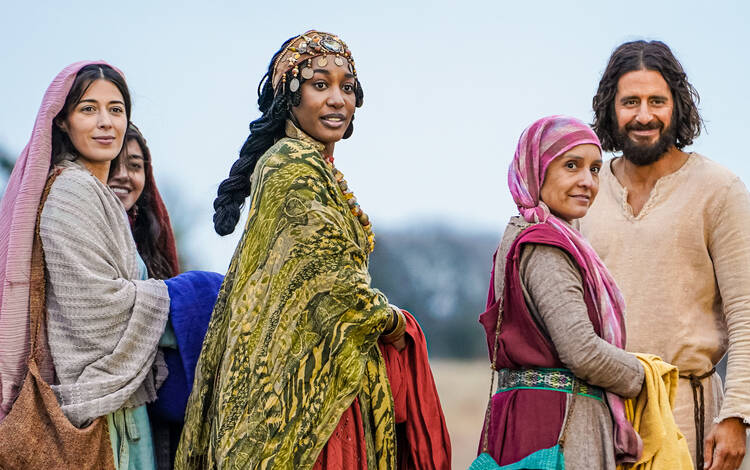 It used to be that telling stories around the edges of faith was what faithful people did. Jews call this midrash, or aggadah: the tales that extend the stories of Torah and other scriptures, that fill the gaps between the lines. It is here, not in the holy writ, that Abraham smashed idols, that Lilith was Adam’s first wife, that the hand of Pharoah’s daughter miraculously stretched to reach baby Moses as he floated down the Nile.

Early Christians told stories too, prodigiously. They fleshed out many stories about Jesus only alluded to in the canon, like the descent into hell we refer to in the Apostles’ Creed and wonderful details of his childhood. In the Renaissance, St. Ignatius Loyola taught his followers to practice imaginative self-immersion, filling enough gaps in the sparse scriptural narratives to feel like they were there. From Pentecost to the verses of Dante, Christians made the faith their own by riffing on it.

The Reformation seems to have put an end to a lot of this. Protestants banished the storytelling spirit with their turn to sola scriptura, to only what can be found in the canonical books. In response, Catholics doubled down on doctrine, on the magisterium's role in promulgating law and teaching—as if to outdo the competition in literalism. Even as the church later elevated the Immaculate Conception, it did so less as a story than as a logical outgrowth of doctrinal propositions.

In ‘The Chosen,’ Jesus and his Red Letter lines appear only briefly, while stories about his followers explode into the foreground.

U.S. Christians have taken literalism of all sorts to new heights, particularly in Protestant evangelicalism: the Bible, no more and no less. American Catholics adopt many of the same habits of mind with our strenuous legalism.

All this is to underscore my surprise that the major creative achievement of American evangelicalism in recent years—with a Catholic in the starring role—is essentially midrashic.

“The Chosen” is a TV show about Jesus, told through the lives of his followers and others caught up in his ministry. Jesus himself and his Red Letter lines appear only briefly, while the Gospels’ tiny snippets about his followers explode into the foreground. Why was Simon Peter fishing when Jesus found him, and what were the women disciples doing all day while the Gospel accounts were ignoring them? Why did the disciples argue so much? The answers require conjuring a lot of stories.

For the internet Christians who have criticized “The Chosen,” the problem is precisely its willingness to imagine what the Bible leaves out. But from what I can tell from the internet, most viewers simply love it.

The show has bypassed conventional studios with the most successful media crowdfunding campaign in history.

An older woman I know told me she loves Jonathan Roumie, who plays Jesus in “The Chosen,” even though she isn’t Catholic. We realized we could talk for an hour about Mary Magdalene’s relapse on the show, whether Jesus saw Judas before the Sermon on the Mount, and everything else. We only slowed down when she came to tears at the thought of Roumie’s kindness as Jesus—especially his first words to Mary Magdalene at a tavern: “That is not for you.” You see, my acquaintance’s marriage was in trouble. She was planning to leave town. Things were not so good. She seemed of the sort the Lord especially comes for, and “The Chosen” was ministering to her.

People like the two of us are more than an audience, more than a fandom. The show has bypassed conventional studios with the most successful media crowdfunding campaign in history, which included both donations and equity investment. It follows a long tradition of Christians pioneering cooperative economies, going back to the Book of Acts. In this and other ways, “The Chosen” directs our focus outward—to the enabling role of the audience, in addition to the lives of the disciples.

In the Bible and screen adaptations past, Jesus is the center of attention. He is always the one preaching, the one healing, the one leading the action, over and over to the point that it can get old. But when we dwell more fully on the lives into which Jesus appeared—the years of disability, misery and confusion that preceded his simple words, the knowing smile his face betrays right before astonishing someone—the text grows closer to the freshness that the Gospel writers must have felt when they set about telling the stories of this man who felt so incredibly important to them.

The freshness is what religious art and stories are for. We fallen creatures need it.

The freshness is what religious art and stories are for. We fallen creatures, so inclined to backsliding and forgetfulness, need it. We are not God, and we can see best through other mortals’ experience. This is why we need the saints. Earlier Christians’ clever and contradictory tales may strike modern rationalism as backward and odd, but they recognized that faith takes root in imagination. Perhaps the best thing about “The Chosen” is that somebody else can still tell these stories and others all over again in entirely different ways.

The show’s Jesus trusts those he chooses for who they are—all that they are—and what they will make of him.

Dallas Jenkins, the director of the series, is a voluble presence on the show’s YouTube channel, where he presents as an energetic youth pastor, more muscular and assertive than the subtle, playful Jesus of “The Chosen.” His all-Americanness contrasts with the ancient Jewish otherness of the show, where the only people with American accents are the occupying imperial soldiers, a kind of mirror on the Middle East today. I have not been able to withstand much of the hours of talking-head time he has logged to fundraise for the show, but God bless him. He has taken on a mighty task and done so with a once-in-a-generation achievement.

The show helps me love the Lord like I never have before.

Mr. Jenkins’s father is Jerry B. Jenkins, best known as co-author of the Left Behind novels, an also-midrashic mashup of campy sci-fi and the end-times prophecy of “the Rapture.” The novels’ evangelizing strategy is more “scared straight” than “the greatest story ever told,” and there was a certain safety in placing its interpretive storytelling in the future, especially for fundamentalist-inclined audiences anxious about any liberty-taking with Bible-times. The differences are all the more reason “The Chosen” stands out as courageous.

I am grateful for that courage. I confess to have been a Christ-more-than-Jesus sort of Christian, closer to the cosmic Word than the incarnate guy. “The Chosen” has gotten me more into balance—an abstract way of saying this show is heart-melting, that Jonathan Roumie’s Jesus has fearsome power to open the Scriptures to us and that the women and men who follow him are people in whom we can find traces of ourselves. It helps me love the Lord like I never have before.

‘The Chosen’ is the Jesus TV show your very Catholic aunt keeps telling you to watch. And you should.
Mary Grace Mangano

At the risk of committing artistic sacrilege, the closest experience I can remember to watching “The Chosen” was visiting the tender, visceral frescos of Fra Angelico in the monks’ cells of San Marco in Florence. Those frescos are at a centuries-long disadvantage of cultural relevance and fading paint. I am not claiming the show will hold up for as long as they have.

It is only two seasons into what is supposed to be a seven-season run; the heart-melting could cool down. But as soon as I made it to the end of Season 2, I did what I hope more will: added my share to the crowdfunding collection plate for Season 3.

@ntnsndr
Provide feedback on this article
Join the conversation: Login or create an account
Before you can comment, you need to update your profile to include your first and last name, as required in our comments policy. Then reload this page and you'll be set up for commenting. Update your profile