‘The Chosen’ is the Jesus TV show your very Catholic aunt keeps telling you to watch. And you should. 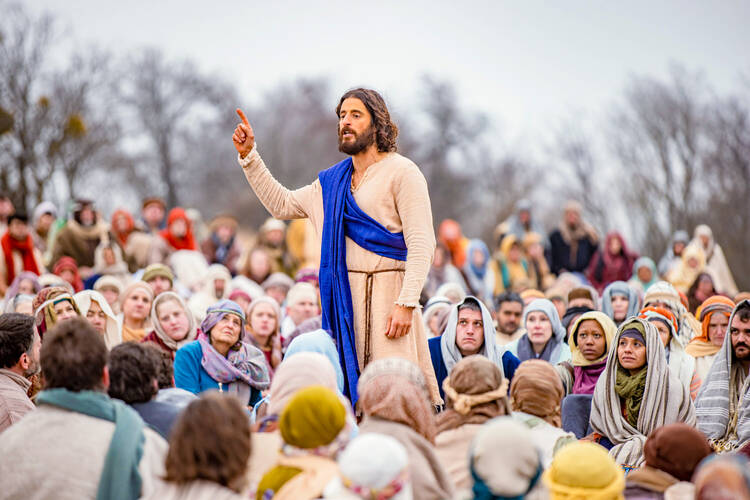 Jonathan Roumie as Jesus in Season 2 of ‘The Chosen’ (photo: Angel Studios)

“Get used to different.” That’s the tagline for “The Chosen,” a show from Angel Studios that is unorthodox in many ways. The first-ever multi-season TV series about the life of Christ, it is entirely crowdfunded. It is also free to watch in The Chosen App, which doesn’t require viewers to fork over their email addresses or pay any fees. Just come and see.

For months, two of my aunts had been urging me to watch “The Chosen.” And if I’m being honest, even though their texts were effusive in their praise for the series, I could not help but think, oh, a Bible show. I pictured the sort of show we watched in my C.C.D. days and didn’t put it high on my priority list.

The show’s most important feature is that it portrays the characters as human—especially Jesus.

I finally gave the show a chance this past Easter when Season 2 premiered. From the very first episode, I was floored. I watched the entire first season in a matter of days. I wanted more. I wanted to watch and see and be with Jesus. The acting is excellent, the visuals stunning, the artistry superb, and it pays careful attention to historic details and Jewish culture. But perhaps the show’s most important feature is that it portrays the characters as human, especially Jesus. Many previous attempts to depict Christ on the screen have focused on his divinity, but what I appreciate about “The Chosen” is that its creators acknowledge that we can never fully grasp his divinity. But Jesus’s humanity? Yes, that we can understand. And that is what this show captures so well.

The church needs this show. The faithful need this show. It sounds strange to say, but in all the books, podcasts, homilies, catechesis and education I have encountered that have formed my faith, it never occurred to me that the apostles had full lives with families, jobs, commitments and challenges, just like I do—and that Jesus disrupts all of that when he arrives. They were faithful Jews (and I’ve learned so much about the Jewish faith by watching the show!) awaiting a Messiah. And following Jesus required real sacrifice and faith. But like any decision made by a human being, it involved questioning, doubt, faith and trust.

I pictured the sort of show we watched in my C.C.D. days and didn’t put it high on my priority list.

One of my favorite episodes is when Simon Peter follows Jesus after the miracle of the fish (Season 1, Episode 4). His brother Andrew had been telling him about Jesus, whom Andrew had heard about from John the Baptist, but Simon was skeptical. He had a family to support and mountains of debt. But with a simple, gentle invitation to trust him, to “let down his net,” Jesus converts Simon. The mercy, love and tenderness of Jesus is palpable.

How can an actor attempt to capture an accurate representation of Jesus? This is what I asked Jonathan Roumie, the actor who plays Jesus on “The Chosen.”

Hailing from New York City and born to an Irish mother and Egyptian father, Mr. Roumie was baptized in the Greek Orthodox Church. When his family moved from the city to the suburbs, they could not find a home in a new Orthodox community, and so they transitioned to attending Roman Catholic churches, where he was confirmed.

I asked Mr. Roumie how his own faith has been changed by the experience of playing Jesus. He said that it has made his relationship with Christ more intimate and has “allowed a proximity that was beyond what was prior.” The producers of “The Chosen” invent certain events to flesh out the fullness of Christ’s humanity, Mr. Roumie explained, and that can be challenging for some, but has also brought a deeper closeness to Christ for many fans.

I watched the entire first season in a matter of days. I wanted more. I wanted to watch and see and be with Jesus.

The show doesn’t shy away from the challenges that Christ presented to first-century Jews (and continues to present to modern viewers). It instead presents their relationships with Jesus as ones of seeking, of trying to understand and failing to do so often. This points to the need for the sacrament of confession, Mr. Roumie suggested. “It’s ‘once saved, always saved,’” he said. “But it’s not ‘once saved, never sinful again.’” As human beings of faith, he explained, the struggle is ongoing, but Christ’s compassion is infinite.

Mr. Roumie emphasized that even though he plays Jesus, he can really only relate to the other characters: Simon being stubborn; Matthew putting his own needs first sometimes; Mary Magdalene’s healing and conversion; Thomas’s doubts. This was what struck me watching the show, too. The apostles are relatable. They were people, too. As we spoke, Mr. Roumie also cited the scene with Simon Peter on his knees by the boat. “I’ve had that conversation with God,” he said, “not feeling worthy.”

“The Chosen” takes its time telling the stories of the Gospels, which necessitates taking some creative license. But the creators of the show hope that by seeing the parables lived out and connecting to them more closely, viewers will be inspired to pick up their Bibles. For me, the show has reinforced how Jesus’s ministry was not something that developed overnight with perfectly faithful followers; rather, it took time to grow and develop. He called people one by one, and not all at once, but when they were ready.

‘The Chosen' presents the apostles’ relationships with Jesus as ones of seeking, of trying to understand and failing to do so often.

One example of this creative license is an episode in the first season that depicts Jesus with young children. The way the creators envision it, the children are Jesus’s first students. In a way, he tests out his ministry with them. This episode also shows him cloaking his divinity, as Mr. Roumie puts it, and suffering the mundanity of humanity in the form of bugs, scrapes, finding food, making a fire and being tired after a long day.

People have been “reluctant to believe it’s more than a melodramatic platitude-driven story about Jesus and His followers,” Mr. Roumie said, “where he’s just a stone statue who talks in King James language that divorces people from their own lives and reality.” But when they do, sometimes by accident, encounter the show, a number of fans have experienced profound reminders of how much they are loved by God.

Mr. Roumie gave an example of when the team was filming the Sermon on the Mount scene (an upcoming episode in Season 2) in Texas. It was the middle of February and 20 degrees. Three thousand Covid-tested extras, all people who invested in the show, had brought their own costumes and found their own travel to participate in the iconic scene. One 12-year-old girl approached the director, Dallas Jenkins, and explained that a year ago she was going to take her own life. But someone sent her the show, and by the end of the first episode, she decided not to go through with it. “That a TV show could impact her enough to change her mind … is unfathomable. God is working very obviously and clearly to use this show as a way to heal people,” Mr. Roumie said.

Why Jesus movies should be strange
Margaret Tucker

Although I initially put off my aunts’ suggestions that I watch “The Chosen,” I have now become the person recommending the show to everyone I know. As I read the daily Gospel, I can picture James and John, sons of Zebedee, asking for seats at the right hand of God and not understanding what their requests mean. I appreciate how tense forming community would be for Jews like Simon and Andrew, who had had their exorbitant taxes collected by Matthew, now someone they are supposed to work with and love. I resonate with Mary Magdalene who bravely leaves her old ways behind but still needs to be reminded of God’s love for her.

More than ever, I see the apostles as people like me. That is such a different understanding than the too-holy-to-touch view I sometimes previously espoused.

But, I guess I need to get used to different—because Jesus changes everything.

Season 2 of ‘The Chosen’ has a few more episodes that are scheduled to be released by the end of the summer. The rest of the seasons are still in funding stages.