Is Britney Spears a Catholic? The internet has thoughts 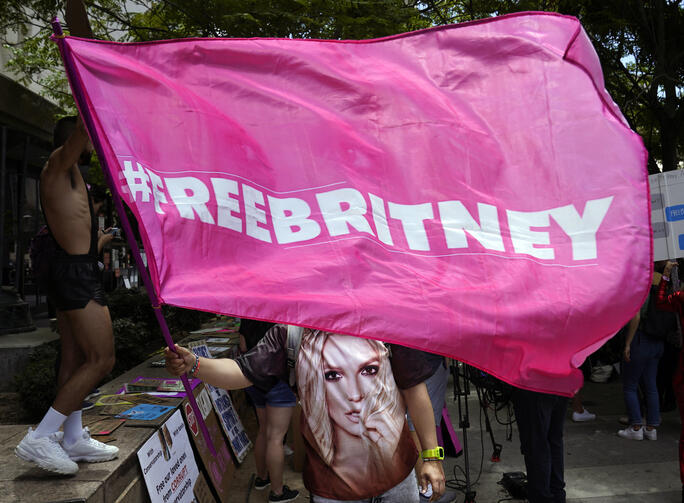 (RNS) — Last week, Britney Spears posted a video modeling two outfits in her Thousand Oaks, California, home — and announced in the caption “I just got back from mass…I’m Catholic now…let us pray!!!”

The internet erupted, as is its wont. Could the singer responsible for making Catholic schoolgirl uniforms a Halloween costume-party staple now herself be Catholic?

On Friday (Aug. 6), the plot thickened (or thinned): Spears’ Instagram video and conversion announcement were deleted. But the internet speculation machine kept chugging as it tried to decipher the pop star’s cryptic one-liner. If you’re looking for clarity, these theories aren’t for you — but if you want to get up to speed with the preeminent hot takes, here’s what you need to know:

Could the singer responsible for making Catholic schoolgirl uniforms a Halloween costume-party staple now herself be Catholic?

Welcome to the team!

Some took to heart the philosophical principle of Occam’s Razor: The simplest explanation is the correct one. Catholic journalists, priests and intellectuals from all corners of the Twittersphere enthusiastically welcomed Spears to the fold. “Happy friday to our catholic popstar queen britney,” tweeted Olga Segura, an editor at the National Catholic Reporter.

“and in the fifth round the catholics draft… @britneyspears !?!?”

If your first reaction to Britney Spears saying she was Catholic was anything others than positive and hopeful, ask the Holy Spirit for the gift of Wonder and Awe.

But, taking things literally doesn’t always make them simple. And entering the Catholic Church as an adult isn’t quick and easy. Catholic initiation is usually a slow process. Once a person expresses the wish to join the church, the potential convert enrolls in a long period of preparation and education, guided by the Rite of Christian Initiation for Adults — a course that in the Archdiocese of Los Angeles, where Spears resides, takes seven months and usually begins in the fall and ends in the spring.

and can i just give props to the priest who, when approached by Britney Spears about joining the Catholic Church, just brought her in and didn't respond with "RCIA starts in September"

But, sometimes individual pastors can speed up the process for an individual if they have good reason, said Diana Dudoit Raiche, professor of catechetics at the University of Dallas. “It’s a pastoral decision—what does this person need right now at this time.”

Seeing where the wind is blowing

Catholic publications have come out in support of Spears since her declaration in court on June 23 that she was unable to go off contraception to have another child. And Catholics from surprising corners of the internet have tuned in to Spears’ struggles. Has their empathy drawn her to the doors of the Catholic Church?

With the forced IUD thing - I and many other Catholics were on Britney's side...

“I don’t see how she could still be Baptist,” said Lorilee Cracker, referring to the past judgment Spears has received from Christians for her wardrobe and confident display of sexuality. Cracker, who co-wrote “Through the Storm” with Spears’ mother, Lynne Spears, saw the Catholic community as much more sympathetic to Spears.

But, even when “Britney Spears” was invoked as a byword for promiscuity, Christians still treated her as one of their own. During the dark days of Spears’ 2007 struggles, Pastor Jon Weece of Southland Christian Church called upon his congregation to show her Christian love.

“If she were your next-door neighbor in the same situation without the money and success, wouldn’t you care about her problems? Wouldn’t you pray for her and offer her support and encouragement?” he wrote.

Got it from her mama

Despite Spears’ Baptist upbringing, her mother attended Catholic school growing up, according to Cracker, and she “loved the school and always had a soft spot for Catholicism.”

Has her mom’s fondness rubbed off on Spears?

Cracker said she wouldn’t be surprised if Spears converted. When Cracker was working on the book almost 15 years ago, Lynne Spears would go to Catholic Mass occasionally along with Baptist services. Cracker said Lynne was very “fluent” between the two traditions.

Spears’ conversion could be an act of defiance against her father, Jamie Spears, whom the pop star is currently petitioning to have removed as her conservator.

More skeptical observers, though, saw Spears’ statement as a dig directed at her family, particularly her sister, who converted to Catholicism in 2018, according to social media reports.

It may not be real. Apparently her social media posts are not coming across as nothing more than ghosting her sister who is Catholic.

Not about her father’s business

Or is religion the new rebellion?

Amanda Kippert, who has written about domestic abuse and religious abuse, suggested Spears’ conversion could be an act of defiance against her father, Jamie Spears, whom the pop star is currently petitioning to have removed as her conservator.

“Her father has been accused of psychological, verbal, and emotional abuse through most of her adult life. And I feel religious abuse or spiritual abuse is very intertwined in that,” said Kippert.

“A lot of abusers use tactics of spiritual abuse to excuse their abusive choices,” she added.

Britney Spears has recently been fighting a temporary conservatorship she was put under in 2008. “I shouldn’t be in a conservatorship if I can work and provide money and work for myself and pay other people. It makes no sense,” she said in a court testimony in Los Angeles on June 23.

Finding religion could be an expression of newfound freedom — or the attempt to declare it.

Spears’ Instagram page is a hotly debated and heavily scrutinized cipher. The authorship of the account is uncertain. Fans are unsure who posts individual entries, whether they are under the direction of a social media team or Spears herself. It’s unclear how closely the account is vetted and who is responsible for deleting posts.

Finding religion could be an expression of newfound freedom — or the attempt to declare it.

Babs Gray and Tess Barker, who have been studying the singer’s Instagram and documenting it on their podcast, “Britney’s Gram,” since 2017, have closely examined Spears’ eclectic posts— from videos of painting to cryptic messages about the devil. Their obsession prompted someone from Spears’ legal team to send them an anonymous tip about abuse within Spears’ conservatorship, which put new wind in the sails of the #FreeBritney movement.

In one of their podcast conversations, Barker said, “We’re always rooting for her, but we’re undoubtedly contributing to the problem.”

Even Barker’s and Gray’s vigilante-like obsession with Spears’ Instagram page is simply another manifestation of what Cracker would call the unnatural levels of fame and attention that encircle Spears. To her financial benefit, but not always her emotional or spiritual gain.