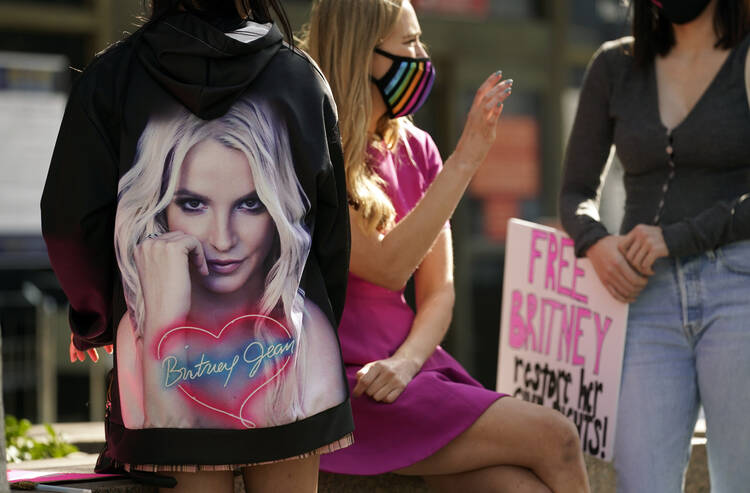 The New York Times documentary on Britney Spears isn’t about her music. It’s not even entirely about Britney Spears. “Framing Britney Spears” is largely about the media, and the people who consume it. I watched to see if the Times could thread that needle, honestly critiquing media exploitation without being exploitative itself. I’m not sure if they pulled it off.

The Times chose to tell her story now because she is in the midst of a long legal battle with her father over her conservatorship, by which Jamie Spears together with an attorney with the Dickensian name of “Wallet” has controlled almost every aspect of his daughter’s life since 2008. Such legal arrangements are usually made for elderly or infirm people who can’t be trusted to care for themselves or their money. Spears is 39.

The New York Times documentary on Britney Spears isn’t about her music. It’s is largely about the media, and the people who consume it.

It is beyond dispute that her legal situation is odd. Her father, who was largely absent through her young adulthood, petitioned for legal control of her affairs after her series of public breakdowns; but the conservatorship continues even after Spears’ celebrated comeback and lucrative residency in Las Vegas. The lawyer Wallet petitioned the court to increase his share of her earnings, arguing that the conservatorship should be considered “more of a hybrid business model.”

In other words, she is well enough to perform and make money hand over fist, but not well enough to decide what to do with that money. (Six days after the documentary first aired, Spears won a small concession concerning investment powers; but the bulk of financial control remains in her father’s hands. Another hearing is scheduled for next month, and Spears is expected to continue petitioning the court to remove her father as conservator.)

Most Americans are familiar with Britney Spears’s story: A small-town girl with a big voice is hurtled into fame, and she soon emerges from the safe and shiny world of “The Mickey Mouse Club”and uses every means but skywriting to announce that she is now a sexy and powerful woman in control of her own destiny. The world eagerly responds by alternately slut-shaming her and demanding more details about her breasts, her virginity, her sexual conquests.

Hers is a Russian novel of a life, lurid, pathetic, savage and ridiculous, and as it plays out it is played for laughs.

Lit by a constant strobe of camera flashes, she has an excruciatingly public romance and rift with Justin Timberlake, marries dancer Kevin Federline, has a baby and then another baby, checks in and out of rehab, divorces, shaves her head, attacks a paparazzo with an umbrella and is involuntarily committed to psychiatric care. It is a Russian novel of a life, lurid, pathetic, savage and ridiculous, and as it plays out it is played for laughs, with the whole world apparently in on the joke of this lunatic star who can’t seem to get it together just because everyone is watching her fail.

I remembered all the details of her coming apart, but I gasped when I saw the clip of the game show “Family Feud” in the documentary. Contestants are asked to list things that Spears had lost that year, and the crowd laughs and cheers when they offer answers like “her hair,” “her dignity,” “her marriage,” “her mind.” It is breathtakingly cruel. And I remember how those who defended her were mocked, as well.

There is no doubt that the media—invasive and predatory tabloids, as well as allegedly respectable journalists—did their best to destroy Britney Spears for ratings. It does not appear that she ever had anyone willing and truly able to defend her, or even to be fair to her. This documentary strives mightily to do both.

There is no doubt that the media did their best to destroy Britney Spears for ratings.

The tone of the piece is deliberately dry. While telling the story of her exploitation, and probing the question of whether she is still being exploited, it struggles to avoid further exploitation in the telling and the asking. The result is a tawdry story told in a passionless voice, including a broad range of interviews presented without editorial comment, with minimal music and in a muted production style. Questions about Spears’s psychological fitness and legal status are asked but largely unanswered.

We hear from MTV host Dave Holmes that, despite what her fans convince themselves they know about their idol, “It’s impossible to know her. We never knew her. We know her even less now. She’s kind of unknowable.” This quote is an anchor that comes about halfway through the documentary, and I wish more had been made of it.

“It’s impossible to know her. We never knew her. We know her even less now. She’s kind of unknowable.”

The documentary is framed, beginning and end, with short video statements from members of the #FreeBritney movement, a social media-fueled mob of superfans who passionately believe Spears is a literal prisoner of her father and other malign forces.

Even as the documentary exposes the inexplicable oddness of her legal situation, it lets the viewer see how little credibility the #freebritney crowd has. A pair of podcasters who divine secret cries for help in Britney’s inspirational Instagram posts come off as invasive and predatory themselves.

Early on, we meet the intrusive cameraman who invades Spears’s privacy at a gas station and goads her into hammering his car with an umbrella. He tells the interviewer that he would have stopped hounding her if she had ever told him to stop. Toward the end, the interviewer asks a #freebritney groupie what makes her think she knows the truth. She concedes that maybe she’s delusional, and maybe she really doesn’t know anything for sure.

“Framing Britney Spears” is not about her, it’s about how we talk about her, and what we think we know.

“If I’m wrong, and Britney tells us we’re wrong and to leave her alone, we'll do just that,” the fan says. These clips are a matched set, framing the groupies who want to rescue Spears as the latest incarnation of the paparazzi who tortured her. They all thought they really knew her; they all thought they were somehow entitled to her person; they all put the onus on her to make the pressure stop. Thus the title of the documentary: “Framing Britney Spears.” It is not about her, it’s about how we talk about her, and what we think we know.

The piece ends with a statement that the New York Times requested to speak with Spears, and that it is unclear if she received the requests. That is a statement in itself, and implies that the fans might be crazy, but they are not necessarily wrong: Spears may actually be a kind of prisoner of her conservators.

The documentary may be taking some unearned refuge in its own subtlety, though. It includes an audio clip of a phone call from an anonymous source claiming Spears is being held against her will. The documentary notes that the Times was unable to verify the provenance of the clip. It is meant to demonstrate what wild conclusions her defenders will draw from such threadbare evidence. But the documentary still airs  the anonymous, unverified clip, which gives it credibility. It comes off as a bit of a cheap trick. They wanted it said, but they didn’t want to be the one to say it.

Netflix’s ‘Bridgerton’ is a feminist disaster. But it (almost) redeems itself.
Simcha Fisher

In another clip shared with ambiguous intentions, Spears lounges in a bathtub of murky water and shows the camera a flower. “See the pink rose?” she asks in a childlike voice. “See how beautiful that is? Watch!” and she crushes it, smearing it into shapelessness. “It’s just soap. That’s all it is. It’s not really a flower, at all,” she says, “Fooled ya!” We see that her legs are scraped and bloody, and she seems to have blood on her fingers. Does this demonstrate that she is being abused, or does it show that she is unwell and in need of the conservatorship? As her former lawyer says more than once, “I don’t know what I don’t know.”

Her story is, as one fan says, “a story of control and identity.” Her life has already been massively deformed by strangers, both fans and critics, attempting to tell her story for her. The documentary succeeds in sparing her that kind of violence. I was left somewhat baffled but grateful that the documentary gave Spears as much dignity as it did. It makes the case at least that here is a real human being, one who bleeds. We should tread lightly.