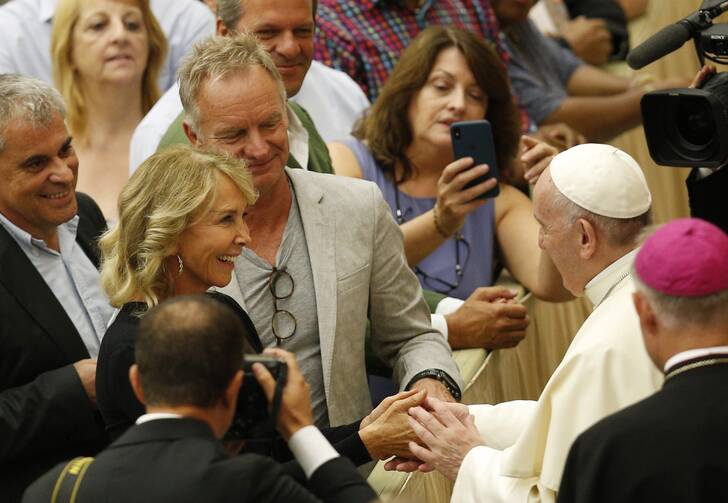 (RNS) — Back in 2000, sociologist Andrew Greeley wrote a book called “The Catholic Imagination,” in which he looked at the enduring power of Catholic stories, images and sensibilities in shaping the experiences of artists through the ages — from the 16th-century Italian sculptor Bernini to the film director Martin Scorsese.

Now there’s a new addition to that corpus: the British rock star Sting.

Evyatar Marienberg, a historian of religion at the University of North Carolina Chapel Hill, has written a book about Sting’s Catholic imagination and how it fueled his creativity.

Before bursting onto the international rock scene as the principal songwriter and lead singer for the Police, Sting (born Gordon Sumner in 1951) grew up in the northeastern town of Wallsend attending Catholic schools. He was confirmed at 14 and married his first wife in the Catholic Church at age 25.

Although Sting considers himself an agnostic, he still believes in some ultimate reality beyond the physical world. And he’s a fan of Pope Francis.

Though Sting no longer identifies as a Catholic, much of his solo singer/songwriter career is steeped in Catholic imagery, symbols, stories and hymns that he absorbed growing up in his working-class Catholic parish. Marienberg’s book, “Sting and Religion: The Catholic-Shaped Imagination of a Rock Icon,” takes a close look at the performer’s religious journey and its themes of loneliness, love and distance from God. Marienberg traveled to Wallsend, interviewed Sting’s peers and numerous priests and finally met Sting himself, once in New York City and another time in Germany.

Along the way, Marienberg explains how Catholicism changed in the 1950s and 1960s, during the years Sting was growing up. While he was a teen, the Second Vatican Council opened the door of the church to the wider world and instituted a raft of reforms. The church also saw a sharp decline in its attendance.

Marienberg, who grew up in Israel in an Orthodox Jewish home, began listening to Sting with his 1987 solo album, “Nothing Like the Sun.” It was still a vinyl record and its back cover had a photo of Sting standing beside a statue of the Virgin Mary. Marienberg chose the photo for the cover of his book.

Although Sting considers himself an agnostic, he still believes in some ultimate reality beyond the physical world. And he’s a fan of Pope Francis. In 2018, Sting was invited to compose a musical piece for an audiovisual show about the Sistine Chapel. He picked a Latin hymn, “Dies Irae,” or “Day of Wrath,” for the choral piece.

He believes there is something out there. He refuses to accept a dogmatic definition of what it is.

“I’ve chosen to live my life without the ‘certainties’ of faith, but I do maintain a great reverence for the mystery and wonder of our existence, and my agnosticism is a tolerant cousin to my curiosity,” Sting wrote in 1983.

Like Sting, Marienberg left his religious upbringing. He now teaches classes on contemporary Catholicism and the social history of Jews and Christians in medieval Europe. His students, he said, have never heard of Sting.

Religion News Service spoke to Marienberg about his interest in Sting and how a religion like Catholicism can leave such a long imprint on people’s lives. The interview was edited for length and clarity.

I read a review of his album and I bought it and liked it. This was in the mid-’80s. I was impressed and curious about the lyrics. I was always interested in religion. I grew up Orthodox and religion was very central. In “Nothing Like the Sun,” there’s a picture of him standing near a statue of the Virgin Mary and a song about Noah and the flood (” Rock Steady “). I went to several concerts of his. Then one day I said, when I retire I’ll write an article about Sting and religion. Someone told me, “Write it now. Don’t wait until you retire.”

Millions of people are raised in a religious context that is all-encompassing. These images, these philosophical concepts, these stories are there. They shape us even when we try to avoid them.

Describe the period when Sting grew up and how Catholicism changed.

There’s a difference between the ’50s and ’60s. I spoke to his peers and they told me on Sunday there was nothing to do. So you went to the church. In the ’60s, cinemas opened and people bought cars and took trips. There were other ways to spend time. With the Vatican II, the church opened a Pandora’s box. The church became more open, and when you become more open, you lose people. There was more integration. People became less isolated. They were able to have non-Catholic friends. When the horizons opened, you could see farther.

Sting left the church but he never developed a hostility to it. He didn’t become an atheist. Describe his attitude to the church.

Yes, he didn’t slam the door. It was gradual. He says in several places that the corporal punishment pushed him out. I spoke with several of his friends and they said he was hit often, not because he was a bad student. He was actually a very good student. But he came dressed in the wrong suit, or he came late. The corporal punishment for the boys was pretty serious. It created in him a real disgust for the church. He attended a little less, but in his early 20s, in his first marriage, he’s still in the church. He was still connected in some ways. He would still say the rosary occasionally. Later he rethought his convictions. But the idea of the transcendental never left him. He believes there is something out there. He refuses to accept a dogmatic definition of what it is. But there is something there. And that never left him. He’s a believer in some other reality.

You interviewed Sting. How did you find him?

Initially I didn’t think I would contact him. But when I started to write about the micro history of his parish and school, I wanted to know what happened in his home. Did they say blessings before meals? For that, I need to get to him or his siblings. Through a series of contacts with a colleague of mine that knew a professor of theology in New York who went to school with Sting, I was able to contact him. We met twice. We were supposed to meet a third time but didn’t because of COVID. I’ll meet him in November when he performs in Greensboro (North Carolina). I’m in email contact with him. He’s very responsive.

Review: Reporting on religion can be dark. But we need people on the God Beat more than ever.
Daniel Burke

18 ‘kids’ movies that have life lessons for adults
America Staff

Why is it important to excavate Sting’s Catholicism?

Millions of people are raised in a religious context that is all-encompassing. These images, these philosophical concepts, these stories are there. They shape us even when we try to avoid them. Many people would hesitate to say they’re culturally Catholic or culturally Muslim. But these things shape you for decades. A priest told me that when he goes to homes for the elderly and he wants to find Catholics, he would start to quote from the catechism and he would see on people’s faces if they know what he’s talking about. Some people who can’t speak at all will respond. That shows how deep these things are in our brain and why it’s hard to avoid them. For some artists it’s reflected in their art, like in Sting’s.