We’re all desperate for hope. Ted Lasso is here to deliver it. 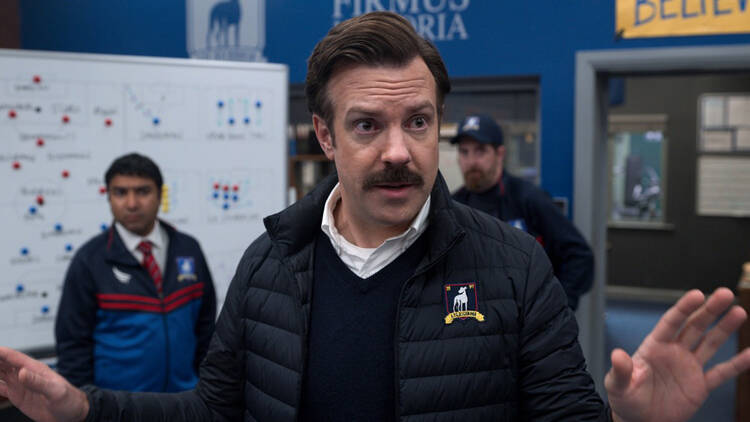 They reply, earnestly but defeated,“Haven’t you lived here long enough to realize it’s the hope that kills you?”

It’s the hope that kills you. Consider it the latest translation of one of the most cutting lines in the Gospels: “We had hoped” (Lk 24:21) is what the two disciples on the road to Emmaus say to explain their desolation after the crucifixion of Jesus. They had hoped that Jesus, their friend and teacher, would be something else. Instead, he was murdered like a common criminal.

Our world and our moment is desperate for hope. A year into the pandemic, good news beckons. Vaccines and economic relief are on the way. Tantalizing daydreams of crowded stadiums and family reunions, packed bar booths and church pews flitter through the minds of a weary people.

While we wait for the realization of that hope or for the shots of vaccines to find our arms, it is the perfect time to sink into the couch and run through the most hopeful show on television: “Ted Lasso.”

It is the perfect time to sink into the couch and run through the most hopeful show on television: “Ted Lasso.”

Ted Lasso (Jason Sudeikis, who just took home a Golden Globe for his performance) is a Division II college football (American version) coach who accepts a head coaching job on a fictional football (English version) club in the English Premier League. It is quite the promotion, considering that Ted Lasso doesn’t know the first thing about the sport (we see his assistant coach, “Beard,” reading Soccer for Dummies on the plane above the pond in the first episode).

Is Ted Lasso just another man hired for a job he was not remotely qualified for? Yes. But the reasons behind his hiring are more sinister and serve as the driving force behind the show’s plot. Ted’s new club, AFC Richmond, has a new owner: Rebecca Welton (Hannah Waddingham), who takes over the team after a messy and public divorce from her ex-husband, Rupert (Anthony Head). After suffering the humiliation of seeing Rupert’s infidelities spread all over the English tabloids, Rebecca is ready to drive her ex-husband’s beloved football club into the ground. Hiring an amateur American football coach who doesn’t know that soccer games have two halves or can end in a tie is the linchpin to her plan.

But Ted Lasso starts to defy expectations. Despite his insistence that he doesn’t care about wins and losses, the team begins to win. Egos deflate. Cold shoulders melt away.

Along the way, we are charmed into witnessing the character development of every unlikely and unlikeable character. It is the closest vantage point to God a viewer can have on television today. It’s not particularly realistic to expect everyone to change for the better, but it isn’t impossible, either. And what is art but sublime meditations on what is idealistic and unlikely yet all the while still true?

A show this positive runs the risk of being what critics call “cheesy.” It is anything but.

It would be a mistake just to chalk up Ted Lasso’s (the character and the show) mood to a positive attitude or optimism. It demands more spiritually mature language. It’s hopeful. It can be difficult to parse the difference between optimism and hope, like trying to describe the difference between love and infatuation to a middle schooler who has his or her first crush. The great spiritual writer Henri Nouwen got at much of the difference: “The optimist speaks about concrete changes in the future. The person of hope lives in the moment with the knowledge and trust that all of life is in good hands.”

It would be a mistake just to chalk up Ted Lasso’s mood to a positive attitude or optimism. It demands more spiritually mature language. It’s hopeful.

There is a beautiful rumination on marriage in the biopic “Frida” that also gets at the distinction between the trivial and worthwhile:

I think at worst it’s a hostile political act, a way for small-minded men to keep women in the house and out of the way, wrapped up in the guise of tradition and conservative religious nonsense. At best, it’s a happy delusion—these two people who truly love each other and have no idea how truly miserable they’re about to make each other. But, but, when two people know that, and they decide with eyes wide open to face each other and get married anyway, then I don’t think it’s conservative or delusional. I think it’s radical and courageous and very romantic.

In the face of despair, hope is a revolutionary act. If it fails to look reality and suffering in the face, it is shallow optimism. Hope is different. Hope resists the cruel and unforgiving determinist logic of the world. It is not the defeated, resounding sigh of “Look on the bright side of things.” It stands in defiance: Things do not have to be this way.

So much of the spiritual life is learning to give ourselves permission to grieve, to be angry and yes, to hope. When faced with an invitation to hope, the temptation to despair—to talk yourself out of it—stalks closely behind. In a year where hope has been tough to come by, it’s imperative to let yourself feel it when it comes. And if remembering how to hope is difficult, 30 minutes in prayer will probably help. And if remembering how to pray is also difficult, 30 minutes with “Ted Lasso” might just do the trick.