A great Catholic film from the late Christopher Plummer 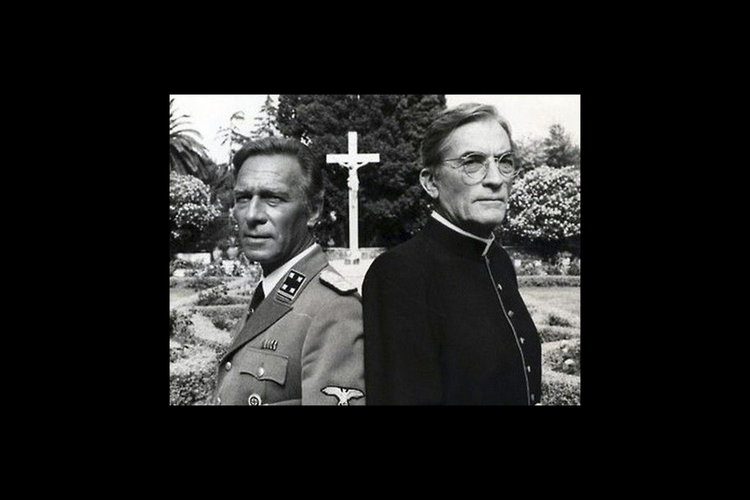 Christopher Plummer and Gregory Peck in “The Scarlet and the Black” (photo: IMDB)

The great actor Christopher Plummer died today at the age of 91 after a fall at his home in Weston, Conn. He will be remembered for his iconic role—along with Julie Andrews—in “The Sound of Music,” playing Georg von Trapp, the father of the famous musical family. Ironically, the role that made him famous was a role he detested: As a classically trained Shakespearean actor, he found it difficult to go through with that production. Ever after, he privately derided it as “The Sound of Mucus.” (It is interesting to note how certain roles that made actors famous are often the ones they liked the least.)

However, when I heard of his passing, I immediately thought of another role he played, one that was not so well-known—and one that was one of my favorites. It was the made-for-TV movie “The Scarlet and The Black” (available on Amazon Prime), in which he played the German Nazi commandant responsible for controlling Rome during the Second World War. He matched wits with an Irish priest who was equally determined to save not only the Eternal City and its inhabitants (including Pope Pius XII) but also those who were marked for persecution—people of the Jewish faith.

“The Scarlet and The Black” told the story of an Irish priest, Msgr. Hugh O’Flaherty, who was in the Vatican diplomatic service in World War II.

“The Scarlet and The Black” was based on the 1967 book The Scarlet Pimpernel of the Vatican, written by J. P. Gallagher. It told the story of an Irish priest from County Kerry, Msgr. Hugh O’Flaherty, who was in the Vatican diplomatic service in World War II. In 1983, the book was made into a movie for CBS with an all-star cast, with Christopher Plummer as the German Herbert Kappler, Gregory Peck as Msgr. O’Flaherty and Sir John Gielgud as Pope Pius XII. (Interesting how Sir John Gielgud always got to play the pope in the movies!) Filmed on location in Rome and the Vatican, the movie slowly leads the viewer into the lives of the two protagonists and how they plan to outwit the other.

The film left an indelible imprint. I naturally liked it because as a history buff, it appealed to me straight away. Also, it had all the elements you would want in a movie of that kind: drama, irony, excitement, political intrigue, fisticuffs and psychological battles, as well as religion, and, not to mention, the occasional love interest.

Filmed on location in Rome and the Vatican, the movie slowly leads the viewer into the lives of the two protagonists and how they plan to outwit the other.

Plummer played his memorable role to the hilt. Peck was a distinguished and handsome actor, and he had the athleticism to carry off the role of the Irish priest. In one memorable scene, he is about to be stabbed to death by a faux monk sent by Kappler; Peck’s O’Flaherty gives the guy a few good right hooks, evading death.

Peck made O’Flaherty look like a screen idol, which Peck was, and in reality, O’Flaherty was not. A photo of Msgr. O’Flaherty revealed him to be more like Karl Malden’s Father Pete Barry in “On The Waterfront,” a large man with a bulbous nose! But Peck captured his fighting Irish spirit just the same. “The Scarlet and The Black” was also a morality tale, told and shown, as they used to say, in “glorious Technicolor.” If you were not careful, you could miss the whole point of the movie, given the locale, the color and the all-star cast.

“The Scarlet and The Black” was also a morality tale, told and shown, as they used to say, in “glorious Technicolor.”

When the movie was produced, the German officer to whom Christopher Plummer’s Kappler character was an aide—Karl Wolff—was still alive, and another name had to be used. Kappler, was responsible for one of the most noted crimes of the war in Italy, the Ardeatine massacre of March 24, 1944, in which 335 civilians and political prisoners were killed. Kappler was sentenced to life imprisonment for the crime. He would later escape back to his native Germany in 1977, smuggled out of a prison hospital in a suitcase by his wife. By that point he weighed barely more than 100 pounds. He died a year later at age 70.

In the movie, Kappler was fixated on eliminating O’Flaherty because he kept evading Kappler’s directives while saving as many lives as possible, running an underground operation and intelligence service while tending to his official Vatican duties. By the time the movie ends, the Allies win the war, Kappler is jailed and O’Flaherty resumes his Vatican duties. (Gielgud’s Pius tells Peck’s O’Flaherty, “In my heart, I honor you.”) And before he retires to his home county in Ireland, O’Flaherty performs a truly Christian act of redemption and forgiveness.

In the penultimate scene in the movie, Plummer’s Kappler begins to realize that he is about to lose everything: the war, yes, but also his prestige, his standing and possibly his family. He is seized with anger, hatred and regret. He yells out into the night against his perceived enemy, the Irish monsignor. He is yelling for his redemption—and he gets it, but not in the way he thinks. After he is jailed, the only person who visits him is Msgr. O’Flaherty. In the end, O’Flaherty befriends his enemy and baptizes him, providing an ending to the movie no one could ever have foreseen.

With Christopher Plummer’s passing today, I remember him for this great role in a very Catholic and “catholic” movie—and for all his great roles, even for the one he detested. It can be said of Christopher Plummer that he brought energy and verve to everything he did, and for that, he deserves our accolades for his use of the great talents God gave him.