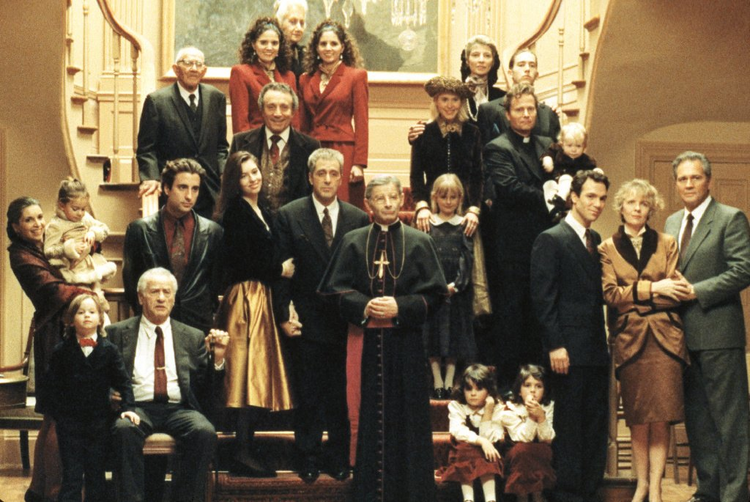 The cast of 1990's "The Godfather Part III" is shown in a scene in a recut version, "The Godfather Coda: The Death of Michael Corleone," from director and co-writer Francis Ford Coppola. (CNS photo/courtesy Paramount)

Redemption has been at the root of the “Godfather” movies since they first appeared in 1972. It was always personal: When young Vito Corleone murdered Don Fanucci in 1920 (“The Godfather: Part II”) it was about redeeming his family and his pride. When Michael Corleone started moving the family money into Las Vegas in the mid-1950s (“The Godfather”), it was about legitimizing the Corleone name. When Michael got involved with the 1980s Vatican Bank (in 1990’s “The Godfather: Part III”) it was about sanctifying his business and himself via the imprimatur of the church. The irony—in a series rife with ironies—is that the Vatican of the story is as corrupt as the Corleones.

There is a sense with “The Godfather, Coda: The Death of Michael Corleone,” recently released by Paramount,  that Francis Ford Coppola is trying to redeem himself. The last movie in his “Godfather” trilogy was critically eviscerated when it debuted, and “Coda” seems a last-ditch effort to redeem the film, and thus the entire “Godfather” legacy. Which none of it needs, any more than we really need “Godfather, Coda.”

The last movie in his “Godfather” trilogy was critically eviscerated when it debuted, and “Coda” seems a last-ditch effort to redeem the film.

But given the magnificence of the first two movies, many of us are completists and will want to see how its esteemed director attempts to rescue a movie that has irrelevance in its DNA. This has not changed in 30 years, despite the tinkering and re-edits. Tension, the thing that the first two films generated from their opening moments and sustained throughout, is all but absent here. Nothing really seems to be at stake and the more ham-fisted performances (there are many) reflect it. Michael Corleone pays $600 million to relieve the Vatican’s enormous deficit, becoming a majority shareholder in the church-controlled Immobiliare corporation. But he can’t buy legitimacy or remove the taint of crime from his family name any more than can he ease his conscience for the crimes he has committed. (The flashbacks to the death of his brother Fredo, whom Michael ordered killed in “The Godfather: Part II,” goes missing from this version of the story, but Fredo haunts it.)

One of the more remarkable scenes in the movie has always been Michael’s confession in Rome to the archbishop who will become Pope John Paul I—the victim, in the Coppola version of history, of an assassination. The hierarchy of the church and the Italian Mafia are as one—the Corleones seem relatively naive.

One cannot manufacture urgency in a film that lacks the kind of cosmic conflict of its two predecessors.

Much is tailored to the needs of drama in “Godfather, Coda.” But one cannot manufacture urgency in a film that lacks the kind of cosmic conflict of its two predecessors, which had much to do with the Catholicism that was so ingrained in the films, provided so much of the atmosphere and was so warmly embraced by their characters, even as they defied every teaching. The church was aloof and apart in those movies; here it is a little cartoonish.

What else is different in the “Godfather, Coda”? The churchly pomp of the opening is gone and financial matters are dealt with more expediently and with more effect; Michael doesn’t die physically, despite the title, though the death of his soul is rendered quite eloquently. What impresses a viewer more, though, is how time has made “Godfather: Part III” seem so much a movie about the previous movies. Many of the scenes are re-enactments of what happened in I and II, including the ritualized slaughter that takes place during the baptism of “The Godfather” and the machine-gun attack that occurs early in “The Godfather: Part II.”

His Catholic Conscience: Sin and grace in the work of Martin Scorsese
Robert E. Lauder

Each of the films began with an elaborate party. “Coda” is no different, nor are many of the faces—when Al Martino sings to Talia Shire at Michael’s investiture as a “commendatore” of the church one is swept back to Connie Corleone’s wedding, the meetings in badly lit, wood-paneled offices filled with unpleasant people.

In 1990, the allusions to earlier “Godfathers” probably seemed more clever than they do now, just as Sofia Coppola’s turn as Michael’s daughter Mary—so cruelly received in 1990—now seems quite charming, despite a few wooden moments. Others, including Andy Garcia, who plays Michael’s protégé Vincent, seems to think he has playing someone in a “Godfather” movie. No amount of tinkering is going to solve something like that. “Godfather, Coda” might just be the offer you can refuse.

—The 15 times a Catholic has been named Time’s Person of the Year
—We don’t need to be afraid of the Christmas tree’s pagan roots
—2020 felt like a yearlong Advent. But we can still make this season of waiting special—pandemic or not.