His Catholic Conscience: Sin and grace in the work of Martin Scorsese 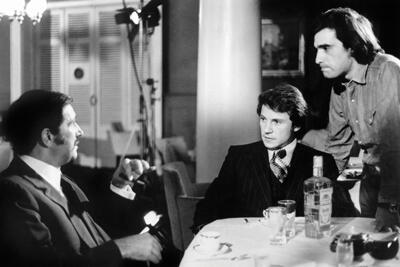 In the opening moments of Martin Scorsese’s HBO documentary “George Harrison: Living in a Material World,” there is a brief but important montage. Scorsese uses a shot from a home movie in which the former Beatles’ lead guitarist, as an infant, is being baptized a Catholic; he follows it with a shot of World War II fighter planes flying over Europe. The montage, a revealing contrast of sacred and profane, the holy and the violent, vividly depicts Harrison’s essential quest: how to be spiritual in a material world. The montage also summarizes the distinguished director’s career.

I remember well my first experience of a Scorsese film; it was the third one he directed, “Mean Streets” (1973). Though at the time I was unable to articulate clearly what struck me about it, I understood that I was having a special cinematic experience. Never had I seen a film that presented such a unique mixture of Catholicism and crime. In a gangster movie like “Little Caesar” (1930), Edward G. Robinson’s character might cry out while dying, “Mother of God, is this the end of Rico?” or James Cagney’s might have a conversion experience as he approaches the electric chair in “Angels With Dirty Faces” (1938). But these were isolated religious moments rather than examples of criminal consciences caught in the Catholic mystery.

The “Godfather” films make it clear that the Italian Mafia leaders were not religious believers. Recall the powerful baptism scene at the end of “The Godfather” (1972) in which Michael Corleone (Al Pacino) claims to reject Satan and sin while at that very moment his henchmen are committing murders he has personally ordered. And while in “The Road to Perdition” (2002) the Irish Mafia members (Tom Hanks and Paul Newman) are believing Catholics, their faith does not interfere with their criminal lives.

In Scorcese’s “Mean Streets,” however, the small-time hoodlum, Charlie (Harvey Keitel), is tortured by his Catholic conscience. In the film’s opening line he expresses the central religious credo of just about every Scorsese film: “You don’t make up for your sins in church. You do it in the streets.” In Peter Occhiogrosso’s oral history Once a Catholic, Scorsese comments:

The first, most important film to me was “Mean Streets,” which had the…theme: How do you lead a good life, a good, moral, ethical life, when everything around you works the absolutely opposite way?... That’s why the opening line is “You don’t make up for your sins in church. You do it in the streets”.... You gotta live amongst the people and change life that way or help people reach salvation in the street, through day-to-day contact, meeting by meeting. “In the street” could mean Hollywood, you know what I’m saying? It’s like a religious vocation.

An asthmatic child, not physically strong, growing up in a rough section of New York’s Little Italy and exposed to both small- and big-time hoodlums, Scorsese found refuge in two places, each within walking distance of his family’s crowded apartment: Old St. Patrick’s church and the local movie house. From grammar school through high school, one year of which he spent in a minor seminary, Marty wanted to be a priest. But his vocation to priesthood disappeared, or was transformed, when he entered New York University and studied film. There he transferred his passion for the priesthood to filmmaking, as he noted in a book of interviews called Do You Believe? “I became a director in order to express my whole self, and also my relationship with religion, which is crucial,” he said. His films proclaim a kind of gospel, though they are anything but preachy.

The film critic Richard Schickel, after spending many hours talking with Scorsese, confessed almost apologetically that he had to comment on Scorsese’s spirituality because in every film of his there are traces of yearning for belief. In Conversations with Scorsese, Schickel wrote:

But just as the kind of violence he observed as a kid is present in his movies, so are his youthful longings for belief. It’s obvious, of course, in pictures like “Kundun.” But there are hints of those aspirations, a longing for some kind of transcendence, or, at the least, relief from reality’s harsher limits, in so many of his secular films. It’s obvious in such early films as “Mean Streets,” less so in films like “The King of Comedy,” “Goodfellas” and “The Age of Innocence.” But in one form or another, in small ways and large, his concern with matters of belief is nearly always present in his work.

Every Scorsese film is deeply personal. The kid from Little Italy is presenting his outlook on life, his deepest concerns and values. In “Kundun,” a film about the life of the Dalai Lama, Marty the moralist is looking at the possibility of living a completely spiritual life in a material world, the same problem, I surmise, that moved him 30 years later to make a film about George Harrison. When asked why he wanted to make “The Last Temptation of Christ” (1988), Scorsese replied, “Because I want to know Jesus better.”

In “Raging Bull” (1980) the boxer Jake LaMotta (Robert De Niro) is depicted as a masochistic self-hater who almost wants to be beaten up in the ring because of the bad things he has done. Referring to a line from “The Diary of a Country Priest,” that God is not a torturer, Scorsese sees Jake’s eventual redemption in the boxer’s affirmation of his humanity: “I’m not an animal. I’m still human. I’m still human.”

In “The King of Comedy” (1987), Scorsese attacks the shallowness of celebrity culture. He bluntly summed up “The Color of Money” (1986) to Schickel in this way: “I wanted it to be a story of an older person who corrupts a young person, like a serpent in the garden of innocence.” And in Do You Believe?, Scorsese describes a character in “The Age of Innocence” (1993), Ellen Olenska (Michelle Pfeiffer), as “a woman on whom a world of Pharisees has placed a crown of thorns.” Victorian society is crucifying her.

For years the violence in such Scorsese films as “Goodfellas,” “Casino” (1991), “The Gangs of New York” (2002) and “The Departed” (2006) prevented me from spotting the presence of grace or the appearance of transcendence. I am not alone. After viewing Scorsese’s first film, “Who’s That Knocking at My Door” (1967), his teacher at N.Y.U., Haig Manoogian, summed up the film, “Too much Good Friday, not enough Easter Sunday.” That is an excellent criticism, not only of the first film, but of the corpus of Scorsese’s work. The dimension of transcendence is present, but it is not expressed as powerfully as is the sin-stained “material world.”

In interviews Scorsese leaves the impression that he thinks of himself as excommunicated because of his divorces and no longer receives the sacraments. Yet his work illustrates the saying, “It is easier to get the Catholic out of the church than it is to get the church out of the Catholic.” The interaction between artistic vision, religious faith and conscience is deeply mysterious.

Anyone who doubts Scorsese’s enormous skills should see his latest film, “Hugo,” a children’s story turned into a visually stunning and cinematically brilliant hymn to the process of making movies. His list of future projects includes the filming of Shusako Endo’s Silence, a novel about the persecution of Jesuits in Japan. While I have no doubt that his cinematic skill will searingly portray the torture inflicted on the Jesuits, I am not sure how effectively he will depict their faith.

If Scorsese could see in the world more powerful evidence of Easter Sunday than of Good Friday, or if St. Paul’s proclamation that “where sin did abound, grace does more abound” could color his conscience more, this exceptionally gifted artist might create films even greater than those he already has made. Might he then produce the masterpiece that so far has eluded him? I cannot help but wonder.

Rev. Robert E. Lauder is professor of philosophy at St. John’s University in New York. His most recent book is Love and Hope: Pope Benedict’s Spirituality of Communion (Resurrection Press).

Show Comments (
3
)
Comments are automatically closed two weeks after an article's initial publication. See our comments policy for more.
PAUL CONTINO
10 years 9 months ago
Very well said, Father Lauder. I still think "Mean Streets" is his best movie, and I still wait for another film of his that will have that resonance of Catholic mystery. I do hope he makes "Silence" (which I'm teaching later this semester) and that it suggests the promise of Easter.
Robert Imbelli
10 years 9 months ago

I agree wholeheartedly with Paul Contino: a fine, perceptive piece.

Michael Barberi
10 years 9 months ago
A wonderful and insightful article Father Lauder. Bravo! I enjoy Scorsese's films but in many ways they lack the special "punch". I do agree that if his films portrayed the dramatic triumph of Easter Sunday over the shock of Good Friday, he may well produce that epic masterpiece. Only the brillance of Scorsese could create that "punch and balance".